As Shauna finds herself investigating Adam, we get some good news and some tragic news regarding the 90s version of the characters.

With how life is going, Natalie doesn’t just need a drink, but she needs coke. Life isn’t going her way, and it is only getting worse from here, and, honestly, things have reached a dead end with Travis. But, luckily for Natalie, Misty has wrangled information out of Jessica and has been watching her! Thus, somehow Misty finds a way to make it to Natalie’s room before she can get a single line up her nose.

But, to make things weird, she doesn’t just kick the plate over or give a hard blow in the air. Misty does a line then tries to keep Natalie from using what is left. This, as you can imagine, pisses Natalie off and confuses her because the timing is just too good. Thus leading to her finding Misty’s hidden camera and not believing Misty when she reveals the information about Travis’ bank account being closed right after his death.

Luckily, Natalie’s former sponsor, the one she assaulted a decade ago, Suzie, seems to work for a bank, if not the bank Travis was with, and she blackmails her to get the information she desires. Meanwhile, Taissa leans on Shauna heavily about what’s going on in her life, particularly the sleepwalking, since Shauna is one of the few, if not only, people aware. I mean, even Simone didn’t know.

However, Shauna is well accustomed to helping Taissa deal with her sleepwalking, so it’s not a big deal for her. In fact, she uses this opportunity, before Taissa gets some rest, to have some girl chat about the dreams she had if things didn’t go left, and even about Adam. In return, Taissa talks about her marriage lacking that “It” factor and her fears about messing up her son.

Travis struggling to get an erection led to a bit of an impasse in the past. One that Natalie wanted to work through, and after having a heart-to-heart with Ben, she learned Ben is gay, and Ben believes Travis is not. However, with Jackie revealing to Travis that Natalie hooked up with Bobby, who gave Travis the nickname Flex? He has no further interest in Natalie, and Jackie has definitely made things worse between her and Natalie.

Which brings us to Adam. Callie is the first to raise a red flag for she can’t imagine an artist who doesn’t have any online presence. Shauna follows this up by seeing if he really went to Pratt and then finds herself confronting Adam twice. First, it is about Pratt and coercing him to reveal his actual background. The second time came from discovering glitter in her closet, where Adam had to hide. Now, bad enough, he stole money from her and the other ladies, but with her safe empty? The safe which held her journals chronicling what happened in the past? Now Shauna really wants to know who the f*** is Adam and does he know who he is f***ing with?

Despite Van’s injuries, she lives! Granted, Taissa thought she was dead like we did, but she is alive, just in a massive amount of pain that getting sewn up isn’t necessarily going to fix. Hence Laura Lee really wanted to fly that plane to find help. Add in winter coming and Jackie forcing Shauna to reveal she is pregnant? It makes getting in the air a dire need, but Ben doesn’t think it is safe.

And he was right for not too long after takeoff, over the lake, Laura Lee died in the plane after it exploded.

Understanding Shauna and Taissa’s Bond On A Deeper Level

Shauna and Taissa seemed like an odd match when they first started to interact, just because they were different. Taissa was introduced as this high-powered lesbian woman running for state senate and lived a high-profile life while Shauna? Well, she lived a quiet, unsatisfying life in the suburbs, with her husband cheating on her and a rude ass child.

Yet, in the last few episodes, you start to understand why Taissa was Shauna’s first call, and it seems that, beyond Taissa being the knot which perhaps binds everyone, she and Shauna are mutual confidants. Shauna knows about her sleepwalking, and who knows what else, and Taissa was the first to learn about Shauna’s first baby with Jeff. A child that I wonder, does Jeff know about?

That aside, with those two, we see a genuine friendship, as displayed by them having giggly girl chat and exploring what happiness means to them, be it career-wise or in terms of love and that “It” factor. 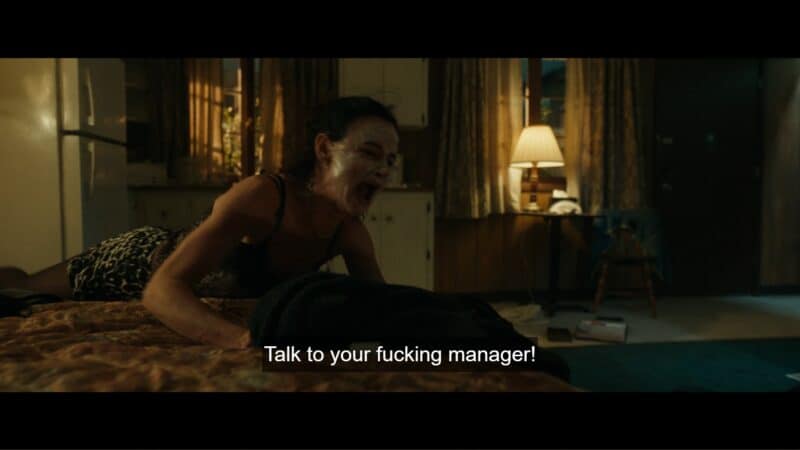 I’m going to set aside Natalie flipping out in her hotel room since she couldn’t get assistance on the phone since that made me roll my eyes. However, Natalie blackmailing her former sponsor, who she assaulted? I feel that really helps us understand why she is so forgiving with Misty. Misty is someone who owns her crazy and has no issue tapping into that, just because it’s Tuesday. On the other hand, Natalie needs to be pushed, and I think a part of her appreciates how far Misty can and will go without the situation being dire.

Not just in terms of the obvious, regarding Misty consistently getting things done and getting results, but also it can make Natalie see herself as not as crazy as Misty, so she can lessen her guilt a bit.

Misty and Jackie Biding Their Time

We have two episodes left this season, and I’m quite proud that, even though Jackie had the perfect moment twice, she didn’t blow up Shauna’s secret. She definitely hinted that she knows things, but does Shauna even realize her journal has been moved yet? Heck, will Shauna even think of Jackie took it and not Javi, and maybe Jackie snatched it off of him?

Then with Misty, it is still major information that Taissa hired Jessica, yet she has kept this to herself for reasons I can’t fathom with 100% certainty. Is she waiting for Taissa to say something against her or a desperate moment that could mean losing access to the group? What’s the long game with that, never mind Jessica?

Here is my thing, we didn’t learn much about Laura Lee. She was religious, understanding, and while there was a badass inside of her, she was in a plane about to die by the time we met that side. Add in we just thought we lost Van, and we didn’t; as much as you can understand what this death means to Charlotte, I can’t say it meant much to us.

The Long Term Plans With Jessica

Jessica has to die, right? Misty can’t let her go for then it won’t just be the plane crash survivors, but the general public who knows Misty is crazy. Never mind, think of the leverage here. Jessica is the key to Misty and Taissa having a relationship in the form of Misty not snitching on Taissa, and knowing if Jessica gets out, she is likely to present a story that could tank Taissa’s political career.

So the only option is to kill her, right? I just hope it isn’t the kind of kill which has everyone, Misty, Taissa, Natalie, and Shauna, involved, and that be the new secret that gets carried over into season 2.

How This Adam Thing Can Play Out

Which, honestly, I can also see for Adam. Shauna has shown herself more than capable of getting an animal, and I think she could gut Adam. Thus leading to Taissa getting called for help, and the others maybe. And one of the reasons we’re jumping ahead to Adam’s death is because his lie and motive aren’t set up to really make you feel like he has something juicy going on.

Yes, can he be connected to Javi, Jeff, maybe, even Ben? Of course. However, increasingly I feel that the theories I’ve seen in comments, or came up with on my own, have been far better than what was delivered, and I don’t see that changing with Adam or anyone else. So I’m hoping for the best but preparing for the worse.

YellowJackets: Season 1/ Episode 8 “The Flight Of The Bumblebee” – Recap/ Review (with Spoilers)
Trajectory: Plateau
This isn't the best episode of Yellowjackets. Yes, Laura Lee died, but she was safe to eliminate since we didn't get to know her. And with Van living, it seems this show may play it safe, which is frustrating. Especially considering how slow it is starting to feel and Laura Lee blowing up in that airplane, just not the kind of boost that is starting to feel overdue and, at this point, may not come.
Community Rating0 Votes
0
Highlights
Misty and Jackie Biding Their Time
Natalie's Desperation
Understanding Shauna and Taissa's Bond On A Deeper Level
Disputable
The Long Term Plans With Jessica
Laura Lee's Death
How This Adam Thing Can Play Out
77
Subscribe to our mailing list