As we’re reminded why Natalie is desperate to solve Travis’ murder, we get to confirm one person who didn’t make it out of the woods.

I Help Out Of Guilt – Natalie, Shauna, Taissa

It’s 2 AM. Taissa had to sneak out of the house, and while Shauna is lucky enough for Jeff to be “doing inventory” and Callie at a sleepover, who knows when either might be back? So for Shauna, this is all very inconvenient, and while, yes, a part of her does get excited about trying to catch a blackmailer, hence her getting a tracker for the bag, she already has Adam to worry about. So, while they are all being blackmailed, she doesn’t necessarily want this to become a thing in her life. But, with Natalie involved and her having nothing to lose, there is that possibility, and that’s exactly what Shauna fears. Yet, with Taissa, she tries to give grace to Natalie. After all, she and Shauna have families; they have distractions from what happened in the past – Natalie doesn’t. So someone trying to blackmail them, and her thinking it is related to Travis? Her mind is going a million miles an hour to not just solve a crime but because it has found a means to escape what she may often dwell on.

However, despite tracking the guy, chasing him down, and Taissa even getting to tackle him once, he gets away. But not without Natalie wanting to take a shot at him and only missing because Taissa stops her.

Don’t You Just Want To Blow It All Up? – Adam, Shauna, Kevyn, Natalie, Misty, Jessica

Now, you might wonder how and where Natalie got a gun? The answer? It was Kevyn’s, and unfortunately, he can feel a change in his gun’s weight, checks things before he and Natalie separate, and she lies to his face about what happened. This is unacceptable for him, and as he holds her accountable, she decides to play down what they are, despite how she was talking about him to Shauna and Taissa because, what does an addict hate more than accountability? Especially from someone who has the power to make them feel guilty? 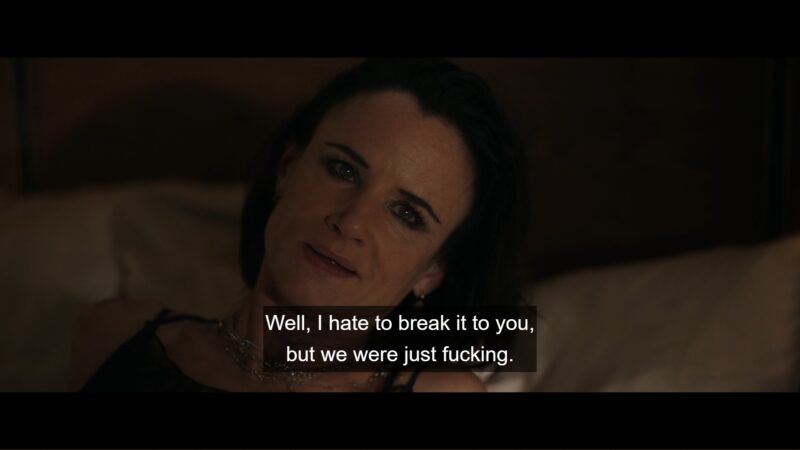 Natalie isn’t alone in blowing up her life, though. Adam, who seems to believe he and Shauna are meant to be, goes to her home and is able to convince her to have sex with him in the bed Shauna shares with Jeff. Those two BARELY miss getting caught, and it seems Shauna is getting closer and closer to losing the safe and unsatisfying life she has put up with all this time.

Which leaves Misty. Jessica isn’t as forthcoming as she likes, and Misty knows she is hiding something. So, threats are issued, including killing Jessica’s father with fentanyl-laced chocolate. This leads to Jessica revealing she works for Taissa, doesn’t think Travis killed himself, and noting she did some investigating and found that Travis’ bank account was closed right after he died. But, despite coming forward with this information, Misty naturally keeps her handcuffed in her basement.

Jackie knows something is up. Shauna won’t talk to her but has now increasingly been whispering with Taissa, and Shauna decides it is time to reveal she is pregnant. But, rather than say it is Jeff’s, she says it is Randy’s, and while Jackie is asking all the questions needed to know that’s BS, when things get quiet, you can see Shauna hopes they’ll both accept the lie and move on. However, with nothing to do, Jackie snoops around Shauna’s things, and upon finding and reading Shauna’s journal, she learns the truth.

While Jackie is learning the truth, Taissa leads a group comprising of Misty, Mari, Akilah, and Van to look for civilization. Charlotte has a premonition about a blood river and red smoke that she conveys to Van, which freaks Van out a bit. Why? Well, unlike Taissa, who adamantly is against anything which can’t be explained, Van notes Charlotte’s visions about a teacher’s affair and other things have been true.

This doesn’t sit well as the red river is seen, and the compass goes crazy in Mari’s hands. However, things really come to a head when we learn the red smoke from Taissa’s flare gun, which is used when wolves attack their group and kill Van. Which leaves you to wonder, will the girls now head back to camp, or will they continue to follow Taissa, despite her plan getting one of them killed?

What It Means To Blow Up Your Life

Both Natalie and Shauna found different means to deal with their trauma. Shauna sought out Jeff, having a family, and surely between her marriage and raising a child, she had the means to distract her from whatever ill thoughts or guilt she had. Taissa, too found this as a means to keep her from dwelling on the past. Natalie, however, didn’t get that. She might have tried to follow the same path with Travis, but whether it is him not wanting kids, the drugs, alcohol, cheating, who knows what, it didn’t happen. Heck, maybe Natalie had miscarriages, as well.

So, for her, to get some means to drown out what happened, she drank, smoked, did drugs, and when Travis wasn’t willing and able, she had sex with others. Those distractions lasted a while, but as shown, they don’t last forever. Shauna’s daughter is grown up now and has gone from a distraction to a headache, and Jeff from someone with who she could pursue normalcy with, to someone who likely reminds her of her parents’ sordid marriage.

Then with Natalie, with being sober, comes her seemingly, once again, trying to attain normalcy, and with Kevyn popping up, with two kids accompanying him, at one time, it may have seemed like a way to get what Taissa and Shauna have. But, neither Shauna nor Natalie want these lives, these distractions, anymore.

Shauna wants her youth back, some form of chaos, which she controls, hence her continued pursuit of Adam or allowing him to fawn over her. As for Natalie? She blows up the life she could have with Kevyn out of fear. For with both ladies, there is something about dismantling the lives they are used to, that they built and accepted for decades and the fear of the unknown. With Shauna, the fear is, what would life be with Adam? Considering all she has done and potentially starting another relationship through infidelity, will things be or become as bad with Adam?

As for Natalie, Kevyn is too nice, too perfect, and she is not. How will she fit into his world? When it comes to his kids and their mother, will they accept her? Fear is a driving force, and I think that it’s not just her shared past with Travis that keeps her so strongly focused on him. But the same familiarity that keeps Shauna with Jeff, and maybe even Taissa with Simone.

The only reason Van’s death is a highlight is that we’re overdue to see someone die. In fact, I expect someone else to die either during or an episode before the season finale. For if there is one thing the 96′ crew needs is drama and some sense of urgency. For it isn’t clear how many months we’re into their 19-month stint in the wilderness, but I need things to pick up.

Take note, even when medicated and monitored, Charlotte had visions. So imagine all the things she will see, potentially hear now, without being medicated? Add in Laura Lee advocating for her to speak up and making it seem her visions are something from God? Oh, Charlotte will probably be not just someone who presents the most obvious foreshadowing but likely will push you to take note more of things people say in passing and get you to analyze them more closely.

Jackie learning about Jeff to me is a highlight solely for the drama. Especially considering, once Taissa returns with a death on her hands, Jackie blowing up Shauna’s spot likely will be seen as a means to, even if for a moment, regain a position of leadership. Now, I won’t say it’ll work, for, between Taissa’s guilt and the possible fawning over Shauna, Jackie may not get the results she wants. However, it will be fun to see her try. As Misty noted, she does detective work for fun. So her learning Jessica was hired by Taissa? Oh, this is what dreams are made of. For now, she can play this one of two ways – she can either manipulate Taissa into having her around more, maybe getting to bond with Sammy (can you imagine?), or use this knowledge to have everyone turn on Taissa. You know, in a “We all hate her, so that makes us closer, right?” kind of way.

But, the question is, like with Jackie knowing who the father of Shauna’s baby is, how long will this information be held to the chest before being used? Also, will it be used as predicted or unexpected?

Weirdly, I’m happy Travis couldn’t get it up, for it’s in line with his narrative. Yes, he likes and is excited about being with Natalie, but he is also often in his head. And I think through Travis, we’re reminded how much young men are often in pursuit of this unrealistic depiction of what a man should be, and unfortunately, most guys see their libido as the key to their manhood. So with Travis not being able to get and sustain an erection, it’s another blow.

Yet, I feel that his momentary impotence acts as a lesson of sorts and shows a more complicated young man than what other programs would give us. I mean, if this was any other show, or if this was a movie, Travis would be the hunk whose volatile relationship with Natalie would have lasted all season until they realized they liked each other, and then they’d have sex in the woods in a ravenous way.

But, with how Travis is handled, as sensitive, anxiety-ridden, and struggling with not fitting the role he thinks he should, we’re given a far more complicated character. One who, increasingly, you can see why Natalie needs to fit the image in her head for, with those two so connected, it likely feels like, if Travis can get so low to kill himself, Natalie might be capable of it too.

Yellowjackets: Season 1/ Episode 7 “No Compass” – Recap/ Review (with Spoilers)
Trajectory: Plateau
There is nearly universal intrigue in what every character could bring to future episodes and, with one character's death does come the possibility of two in the wings getting to step up and be more than actors in the background.
Highlights
Travis' Impotence
Misty Knows Taissa Hired Jessica
Jackie Learning About Jeff
A Reminder That Charlotte Has Had Correct Visions For A While Now
Van's Death
What It Means To Blow Up Your Life
Disputable
84
Subscribe to our mailing list