As we watch the aftermath of the plane crash and see Misty jump into action, the 1996 versions of the characters begin to eclipse their 2021 counterparts. 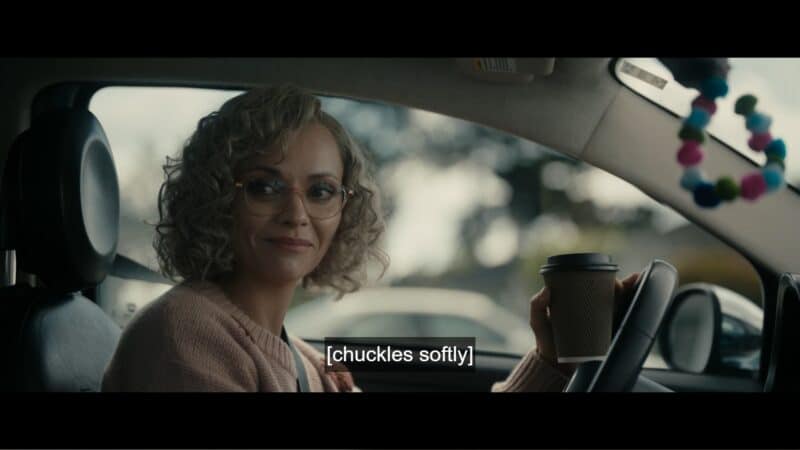 Natalie’s timing gets mixed reviews. Yes, she interrupted a date that required Misty to manipulate a man to come inside her home, but it was still a date that could have led to something. Unfortunately, now that man has run away, but Natalie brings something exciting – a postcard! Well, not any postcard, but one with the symbol discovered after the girls’ plane crashed, and with Misty and Natalie getting one, it means it is time to ask questions.

Luckily for Natalie, Misty always comes prepared, and she even has experience doing detective work, thanks to her being part of a group that looks into cold cases. Mind you, they are amateur, unpaid, and by no means asked to do the work they do, but it is fun and gives Misty a sense of purpose. Plus, because of her work with her group, she is already building a case and is more than willing to share the information she has.

Of that information, one thing Natalie hones in on is that Misty found Travis. Unlike Taissa, Shauna, Misty, and Natalie to a point, someone who really went quiet when the post-crash chapter was over. Yet, Misty got his number and address. Mind you, he is not responsive to the idea of a reunion when Natalie calls, but this just pushes her to want to see him further.

Though it should be noted, it isn’t like Natalie is looking to reunite with any and all boys from her past. Kevyn, her high school best friend, one of the goth kids, who is now a cop, sees Misty and Natalie, and when he tries to reconnect, Natalie acknowledges his person but leaves his contact info behind – but Misty makes sure to take his card for future purposes.

Shauna and Jeff are having marital problems. They’re in counseling for it, but it isn’t really working. They still don’t have sex, and it seems Jeff is ready to move on, and Shauna is just holding on because it’s normalcy for her. Yet, it isn’t until a fender bender with this rather zen dude named Adam, an auto mechanic with a crush on her and her killing another rabbit, does Shauna click in. With doing that, she and Jeff reconnect, but with her seeing the name Bianca on Jeff’s phone, after Bianca texts her husband, it could be she’ll lose Jeff just how she got him – minus someone dying to seal the deal.

Also experiencing marital problems are Simone and Taissa, but not to the same degree as Shauna and Jeff. With them, the issue is that Taissa’s political ambitions are taking away from her time as a mom, and with their son Sammy not making friends and seeing some horrific being he tries to protect himself from, there are red flags all over. However, it isn’t clear what can be done or what is causing Sammy to see this woman who haunts him.

They Can’t Take That Away From Me (Past) – Misty, Van, Jackie, Laura Lee, Shauna, Taissa, Charlotte, Travis, Javi, Ben

So when the plane crash-landed, the pilots died, Travis and Javi’s dad got impaled, another girl got impaled, and Van? Well, Jackie pulled Shauna from trying to save Van, but Van lived. Also, Charlotte and Laura Lee survived, so the plane crash isn’t what killed them. However, at this point, the trauma has begun, and you can already see why Jackie likely got killed since Van isn’t going to let go being left to die. But you can’t blame her.

Though, while everyone else is freaking out or pissed off, Misty goes into action. She is the unofficial nurse due to her babysitter’s Red Cross training, and while some of her actions are alarming, like cutting off Ben’s, the assistant coach, leg, since it pretty much was destroyed in the landing, people are thankful for her. Granted, when Travis and Javi’s father, Coach Martinez, crashes to the ground when Travis tries to save him, there was nothing she could do. But at least for everyone else, she could do something.

This is why she extended everyone’s stay in the wilderness. Yeah, the reason those kids were in the woods for 19 months is because Misty, finally feeling useful, popular, what have you, didn’t want to let that go, so she destroyed the transponder, which would have led to everyone being found.

The fact she caused all of this and no one knows, that’s the sell to me. She put everyone through hell for 19 months and yet seems, on the surface, to be the least crazy of them all. Natalie is in and out of rehab, Shauna needs to kill animals to not be on auto-pilot, Taissa seemingly has flashbacks, and her child may have second-hand trauma, and meanwhile, Misty’s big issue is having a bad date. Strangely, this is hilarious in the most twisted way.

The Question Of How People Died Continues

While the show tries to cook up the mystery of the strange symbol in the present-day, that allows for the 1996 version of characters to spring ahead and potentially leave their 2021 counterparts in the dust. After all, with us still not meeting quite a few characters in 2021 and knowing at least one died due to the traps the girls made, there remains the need to ask who died and why?

Take note, Jackie left Van to die, and she is not going to get over that. From what we were shown, Misty was bullied, and who knows if Charlotte, Jackie, Van, or Laura Lee were part of that? Much less, who is to say one of them didn’t discover what Misty did, and she handled them? Add in we know Taissa’s attitude, Shauna likely developing her skill for killing animals in 96′, and maybe Natalie developing her gun skills back then? All eyes are put on the girls than the women as their mystery unfolds.

Mind you, with the use of gore to make things interesting, but still just enough for you to understand the seriousness of the situation and not in gratuity – yet. One of the issues with the present-day versions of many of the women is as we see their younger versions deal with the plane crash, the show has now tipped in their favor. Now, Natalie, Taissa, and Shauna don’t have anything to balance the scales. Shauna killing, skinning, and cooking a rabbit for her family was enjoyable, but that required gory scenes to make you take note of her.

As for Taissa, Sammy having issues at school, or Taissa even having issues in her marriage due to her campaign, I can’t say that draws you in. It perhaps is necessary, for family is important to Taissa, but we’re past seeing a Black lesbian family on TV being a notable thing now. I need more for them to matter.

Lastly, with Natalie, I feel like Juliette Lewis is coasting. Now, I don’t say this to be mean, but I feel like the writers are pretty much tapping into the Lewis most of us are familiar with, so seeing her act volatile or even when she gets vulnerable at the bar doesn’t push her as an actress. It’s not like Ricci who switches it up and isn’t the easiest actress to typecast. What we get out of Natalie feels like Lewis in her past work.

Leading me to wonder if it would have been better if Taissa’s actress and Lewis switched parts.

Yellowjackets: Season 1/ Episode 2 “F Sharp” – Recap/ Review (with Spoilers)
Trajectory: Plateau
The balance is thrown off this episode as we witness the first-day post-plane crash, which leaves the 2021 adults struggling to maintain your attention.
Highlights
The Question Of How People Died Continues
Misty
Disputable
Shauna, Natalie, and Taissa's Present Day Storyline
80
Follow Wherever I Look on Twitter and Instagram, Like us on Facebook, and Subscribe to the YouTube Channel.