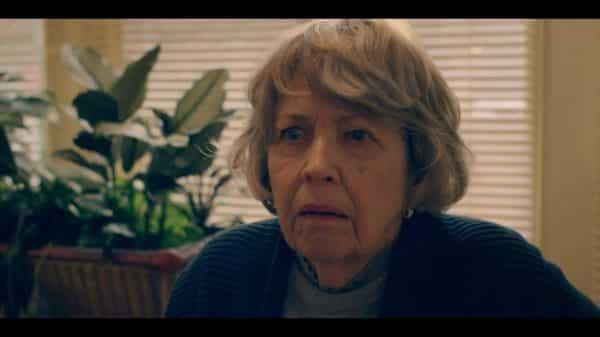 After a rather tame episode 3, things ramp up more, and on top of revolutions, there is a death on the show.

And The World Continues To Implode

As we come upon 2027, Spain has a revolution in which the far left are the ones revolting – making Viktor unsafe again. As this happens, gay marriage and abortion are outlawed in the US, the EU begins to collapse, and compulsory voting becomes law in the UK. Leading to Vivienne becoming prime minister.

With becoming unemployed comes Rosie deciding to jumpstart her life by getting a food truck. One she starts with a new boyfriend, Jonjo, who is likable. However, Edith tests him real quick for a man deciding to get serious with a woman who has two kids raises a red flag. But, with a knife to his throat, he claims innocence. So, Edith lays off.

As for Daniel and his pursuit of getting Viktor back in the country? Oh, at this point it seems he gave up his housing job since he seems to be more at home than communicating with anyone from work. Heck, he even uses Edith to coerce Fran, his neighbor, to use her abilities as an artist so he can attempt to smuggle Viktor into the country. However, at the French border, they’re forced to hightail it.

One of the things noted in episode 3 is how patterns repeat themselves. Take the men of the Lyons’ family, Stephen, and Daniel, cheating on their spouses. Now, while Daniel somehow got away with leaving his husband for a younger man, when Stephen does it? Oh, it is a major blow up. I’m talking so big that Muriel sides with Celeste when she asks him to leave his family home!

But, the bigger thing might be, in the pursuit of getting Viktor to the UK, Daniel dies. Yeah, after spending nearly all of his savings, he tries to smuggle himself and Viktor into the UK by boat over the English Channel. This goes terribly, and alongside more than a dozen others, he drowns. However, Viktor lives, gets to Daniel’s home, and alerts his family as to what happened. Leaving them in shock and rushing over.

While Muriel and Celeste will always have a rocky relationship, when they agree on something, or show some form of comradery, it is still touching. Take Muriel kicking out Stephen. Celeste, while there is a possibility her mom is alive, pretty much seems a Lyons family member through and through. Yeah, with very limited engagement with her siblings in law, but still highly reliant on them. So for Muriel to come to Celeste’s side, and then Stephen’s own siblings not siding with him! Oh, on top of being low-key funny, it must have made Celeste feel an immense bit of love.

Mind you, she still acts like everything Muriel does gets on her nerves, but people don’t change overnight.

Though Rosie isn’t a major force on the show, you have to tip your hat to her meeting a nice man, starting a business, and not just sulking about.

The Chickens Come To Roost

Is it wrong that I’m glad Daniel died and Stephen got kicked out? Don’t get me wrong, I enjoyed Daniel but him trying to move mountains and reroute rivers for Viktor had to give sooner or later. I mean, the man was using what limited power and connections he had to have his boy toy turned partner cross the continent illegally. Which, don’t get me wrong, Daniel fighting for love was a wonderful thing but, like Stephen said, it isn’t like this was a pure love. Daniel promptly dumped Ralph to be with this random guy he barely knew. Hell, if Daniel put in as much effort as to see and protect Viktor as he did his relationship with Ralph, or looking for a boyfriend, maybe he’d be in a better position than 6 feet under.

With that said, you have to wonder if Stephen may recover from his affair? He is living with Elaine now, but it is clear that she was more into the mistress role than a possible relationship. Not to discount her picking up Stephen from the hospital, after a wonky drug trial, but it seems living together was never in the cards for her. It seems she just wanted the excitement of being the other woman and sneaking around.

It really is hard to follow up a nuclear explosion in the first episode, and I fear the show is losing the edge it first had when it comes to the downfall of democracy. For while the realism of these events still holds some sense of terror, they don’t have the same punch anymore. Part of the reason is that the cast seem more and more distant from the epicenter. Spain having a revolution only affects Daniel and Viktor reuniting, nothing more. America banning gay marriage and abortion we see Edith protest for a minute, but that’s it.

All of these events are becoming far off things which don’t necessarily affect the day to day in major ways. Which is perhaps the most fearsome bit of all. This sense that because it is happening across the Atlantic or English Channel, it isn’t really anyone’s problem. Yet, it only takes one or two getting away with something for it to spread. Be it nationalism spreading, revolutions, surveillance, or people without political experience rising to power. The show does remind you of how dangerous things can be but also allows you to understand the complacency which is created when the news mentions one shocking thing after another.