Wherever I Look
Recaps, Reviews, and So Much More
Home TV Series Wayne: Season 1/ Episode 6 “Who Even Are We Now?” – Recap/ Review (with Spoilers)
TV Series

The question of where and what to do after Wayne eventually gets his car is asked, and Wayne may have found one option.

Everyone is on a collision course, but there are a few bumps in the road along the way. For Jay and Geller, it is running across Eric and Jay pushing the idea Wayne is no saint. However, with seeing Bobby acting psycho, maybe it might get through Jay’s thick head that Del left with a stranger because it would be better than staying around her dad. Someone who can barely remember his daughter’s birthday, never mind thinks pouring gas on someone and teasing the idea of throwing a match is funny. Never mind doing that where the trail of gas would hit a gas pump. 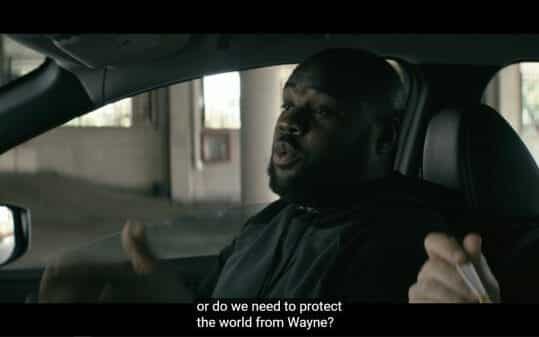 Jay: […] or do we need to protect the world from Wayne.

Is it weird no one asked why Del would leave with someone like Wayne? I get the idea of him kidnapping her is what’s in play right now, but what about Wayne’s past pushes the impression he would do that? From what’s we’ve seen, the way Wayne shows his crazy is by trying to strike hard first since the dude can’t fight. He can take an ass whooping, but as for back and forth, getting the upper hand after losing the surprise? It hasn’t happened yet.

So, with that in mind, also seeing how crazy Bobby is, maybe the narrative might get rewritten here.

Do you remember Orlando and Principal Cole? It’s okay if you didn’t. It does feel like it has been forever since they popped up. But, upon their return, we find them at that conference Cole was talking about, and he is ready to half-ass his speech – much to the ire of Orlando. However, because someone says the speech he was about to steal from the internet, he is forced to speak from the heart.

Mind you, unlike when most do that, we don’t get this over the top, emotional, speech. Cole is frank, honest about the kids he serves but also his shortcomings. I get that, in the long run, Wayne is going to need an adult in his life, and with Principal Cole not having anyone, he may end up adopting Wayne. However, it’s just weird to me how Wayne and Del are being developed compared to everyone else. Not to imply I don’t get this story is about them, and everyone else is supporting. It’s just, there is this vibe that we should see Cole and the rest as important, but we rarely, if ever, are presented anything out of them that is all that is compelling. Does stuff happen to them? Yes. However, nothing happens or is said which makes you giddy for when they are on screen or questioning what happened when they miss an episode.

While Del and Wayne have grown closer, Wayne isn’t a fool. He is this simple guy who is good as trying to end fights quickly, but what does he have to offer Del? So when she gets hauled by truancy officers, and befriends this couple, Trish and Jenny, who have well off families, he feels out of place. They got music boxes, tons of clothes, their own bathroom and what does Wayne have to offer? He burned most of his possessions in a fire and only has a bike and maybe a car to his name. School? If it wasn’t for Principal Cole, he would have long been considered a dropout.

This is in comparison to Del who reads, has better social skills, and gets along with Trish and Jenny — leading to, this time, Wayne abandoning her for real. However, hearing about a couple in a pizza shop and the husband sacrificing his comfort for her, it pushes Wayne to get over himself. So while he didn’t want to go to a dance, didn’t want to dress up, never mind boogie, he does so for that is what Del wants and he realizes he needs to adapt if he wants to make her happy. After all, isn’t she accepting of some of his weird ways, like with smells?

And for a hot minute, it seemed like they reached the point of starting to date. At least with a kiss in motion, it appeared that way. However, then Bobby shows up, with the twins, and starts walloping on Wayne. However, after a few minutes, nearly the entire school comes out to beat up Bobby and the twins – thus giving Wayne and Del time to get away. 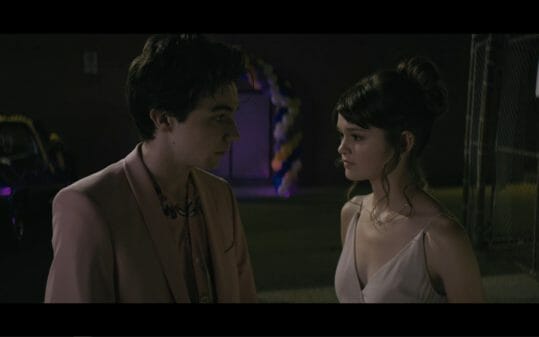 It isn’t clear yet what may happen once Wayne gets his car, but Richmond Hill has to be a place they stop by on the way back. I would say they should try to stay there and live but, lest we forget, these two are minors. Which really does push the need to question, at least for Wayne, what is going to happen here? Yes, his mom is alive, so we know, but it has been 11 years since he has seen her and who knows if she may welcome him with open arms. Granted, it would create an interesting conflict, Del and Wayne having this vast journey and ending it in love, but on opposite sides of the country. However, there still is that issue of arson up in Brockton that Wayne has to answer to.

But, speaking of love, look at Del trying to kiss Wayne. You know that is going to lead to an awkward conversation in episode 7.