As Wayne gets his first job, Del decides to live vicariously through a family she came across. Oh, and it is the twins birthday.

What About Our Birthday?: Carl, Teddy, Del, Bobby

Tweedle Dee and Tweedle Dumb’s birthday is coming up, and Bobby’s lack of mentioning it, or presenting any kind of preparations is starting to get to Carl a bit. Especially since Bobby has a pattern of not treating him and Teddy equally or being a terrible father. For example, for all of Teddy’s claims of how good a dad they have, he got them evicted twice and nearly every memory they have with him includes him getting drunk.

This leads, eventually, to the idea of Teddy and Carl jumping their dad for their pain and suffering. However, with a voicemail from Del wishing them a happy birthday, they chill out. As shown by not mentioning the twins until episode 4, I didn’t see them as contributors to this show. Yet, beyond telling us how crappy a dad Bobby is, we’re also reminded how they, like Wayne and Del to a point, are missing something in their lives. Now, while they have each other, which compensates for lacking a mom and a terrible dad, you can see it isn’t enough. They still wished they went to games, both got to go skating, and probably rely on Del a bit to give them some form of love. Hence why, as soon as they heard her voice mail, they calmed down. All the two doofuses wanted was just someone to care about their special day, and Del delivered their wish.

Really showing you, it isn’t necessarily the big moments that matter but sometimes just an acknowledgment.

With them getting robbed by a sex worker and running low on gas, Wayne and Del realize they need to find a job. However, what Del ends up finding is a funeral home and Wayne? Well, he gets a day laborer job, but the position is trash.

How? Well, a man named Eric rounds up a bunch of people from a hardware store, immigrants like Ramon, and has them work for him. Then, when the job is done, he drops them off at an ICE office, so he doesn’t have to pay them. Now, being that Wayne is who he is, and Ramon was rather nice to him, gave him some quality advice about how to treat Del, help her see he could be a good boyfriend, he gets pissed when he learns what Eric does.

So, what does he do? Well, he steals Eric’s car, stops him from doing his f***ed up deed, and uses a nail gun to pin him to his van. And of course, he lets the undocumented workers out. 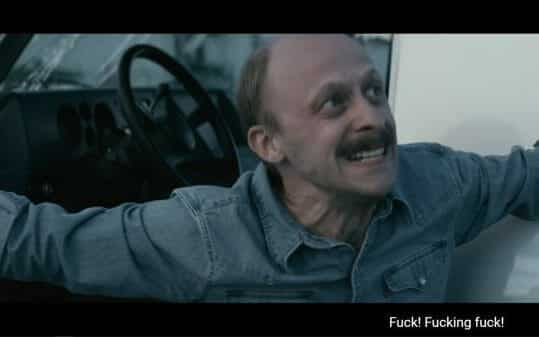 While a story many of us have heard before, you have to love Wayne continuing to show that undocumented immigrants aren’t terrible people. Are some ass****s like Ramon’s friend? Yes. However, you have to partly contribute that to this white kid possibly taking money away from them and getting breaks they sure as hell wouldn’t get. But, with Ramon, who shares his food, time, and looks out for Wayne, you also get the experience a lot of immigrants bring to the country – if you don’t seem like an ass.

What they share is what formerly was advertised as what made America great. The idea of being a mixing pot of cultures which enriched what it meant to be an American. Ramon presenting Mole to Wayne, thus sharing his culture’s food, presenting a sense of kindness to strangers, which may feel foreign based off where Wayne comes from, it is what will make Wayne a better person. Also, considering how limited his palate is, and knowledge to a point, it opens his mind in ways being stuck back home wouldn’t.

So while we may not see Ramon again after this episode, considering Wayne and Del are heading down south, you better believe this won’t be the last encounter Wayne will have with someone of Latin origins. Also, may not be his last experience with mole.

You Can’t Fix It, But You Can Be There: Del, Wayne

One of the critical pieces of advice Ramon gives is that Wayne can’t fix Del’s problems. One of the main things he can do is just be there for her. Which, as she sits at a funeral, trying to understand why she feels the need to be in a place of mourning, that’s what he does. He sits with her, puts his arm around her, and comforts her.

Considering Del’s mom didn’t have a funeral, and she was close to her, it makes even more sense why she asked Wayne why he didn’t give his dad one. Also, it helps explain why she wanted to go to a stranger’s funeral. In a way, I think she wanted to live vicariously. Get to mourn her mother in a way her dad, perhaps brothers as well, don’t do. For with how Bobby talks about her mom, and brothers always acting as parrots, she isn’t able to just be, think about her, and who knows if there is a tombstone somewhere to visit. Never mind an urn to talk to.