by Amari Published: May 27, 2019Last Updated on April 26, 2020
FacebookTwitterPinterestRedditEmail

You may end up in tears during the final moments of this episode as something happens to Lyn she never expected to.

While it seems Emma is going to be out commission for a while, 3 days and counting, an invoice coming in at 0 from Baco rouses her up. After all, what besides sex and money leads to Emma not seeming like a robot? So she goes to his home and addresses not just the invoice but her behavior – she even apologizes. Primarily due to her recognizing the whole sex thing is what happened to her when she was coming up in the corporate world and just because it was done to her doesn’t mean she had any right to do that to Baco.

It has been around a week or more since Mari has been living with the Hernandez family, but with the mural being covered, and Yoli, among the rest, wanting to hit Vida’s, she realizes she has to go. Which leads to a series of strange moments when she could have said something, yet doesn’t. This is kept in mind after Lyn finds out and catches Mari leaving. She confronts her about what the family has done and Mari, the shamed little girl she is, just walks with head low as she preps for what she knows is coming.

Which, that night, is Yoli leading a protest on a rather successful night of the bar. Followed by Lyn, trying to speak to them, explain they are Latinx owned, only have Latinx artist, but Yoli is so full with rage she doesn’t want to hear that so she throws powder detergent at Lyn. Mind you, with Mari in the background not doing a damn thing.

Yet, with hearing the commotion, seeing her sister get detergent thrown on her, Emma flies into action and whoops Yoli’s ass. Well, she does get her on the ground, but Emma isn’t hitting her with closed fists so she doesn’t do much, if any real, damage. However, the sentiment is noted.

But before Emma decided to show, despite us not seeing her work out ever, she got strength, her and Nico reconcile. On top of that, Nico reveals she has feelings for Emma and guess what Emma does? Not only does she have sex with Nico but actually tries to be reciprocal! For once, it isn’t just about her getting off, but she makes sure the other person does as well. Add in this is all done in that bathroom Emma wanted remodeled, and it is full circle moment. At least in terms of Nico noting how bathrooms are safe spaces and things like that and while you understand that in terms of trans rights and inclusion, there is also that modicum of privacy as well to explore your sexuality with another person. Which, not getting too deep into it, if you don’t have a place to do it there or money for a hotel, is much safer than doing something outside. 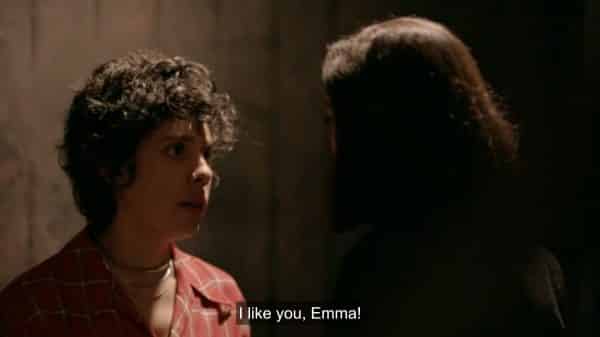 The sex aside, there is also a sweet moment between Lyn and Emma reminiscent of when Lyn made Emma smile during her birthday. Though, this may make you cry. Take note, Lyn has thought herself as some form of a failure for a long time, also has been raised to rely on her looks. So for Emma to praise the work and turnout at the bar, a genuine compliment without an insult included, it’s easy to understand why she cried. For perhaps the first time in her life, she was praised for what she did, not her potential, and that came from Emma. Her only, at this time, known family member and one of her harshest critics.

There are levels to the #MeToo movement which aren’t necessarily explored as much as the older man taking advantage of the young woman. For example, as Emma shows, there is that woman deciding to create a cycle in which she abuses someone who works for her. Alongside that, there is, for a vulnerable population, the possibility, to keep a client, one who clearly knows her stuff, allowing yourself to be used to keep the cash flow. And the importance of Emma putting that out there is to remind people this is a systemic issue which goes beyond the Weinsteins of the world. They might be the first to be exposed, but they are also just the most prolific. So don’t downplay other ways the system is screwy.

Lyn Getting Her Props

TEARS! TEARS I SAY! Yet, they were well deserved since, how often has Emma looked anyone in the eyes and praised them? I’m talking, no sense of obligation but just handed out a genuine compliment? Add in her jumping to Lyn’s defense despite their issues, I think that reminded Lyn that Emma truly loves her. That she has, and still is, invested in her, and knowing she made her sister proud isn’t something that could solely expressed in a smile. You have to breakdown a bit.

As said in an earlier recap, Emma is a selfish ass lover. So for her to worry about Nico’s pleasure, trust her again, it seems like growth. Maybe not by leaps and bounds, to some people, yet between holding herself accountable with Baco, to forgiving Nico, who did nothing wrong, there is growth.

Eddy Finds Victor & Nothing Comes Of That

All we see is the back of Victor’s head and hear him preach. Eddy finally got a storyline of her own, and it was left on a cliffhanger. Ain’t that a moose? 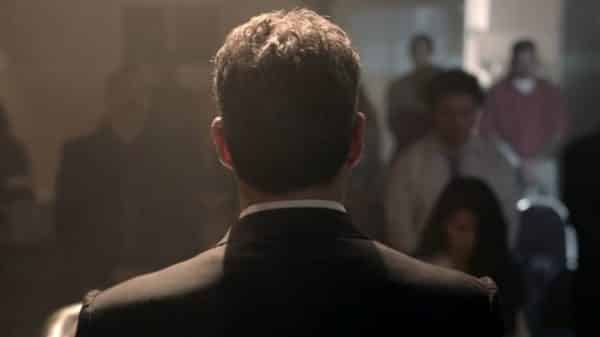 Lyn Is Such A Player Now

Mari Just Watching As Lyn Was Attacked By Yoli

I understand Mari’s conflict, to a point. Yoli and that group gave her a sense of identity, community, and belonging. Something that went beyond her father provided, Johnny perhaps as well. Yet, Emma has been so invested in Marisol for the last few months that her not speaking up for Vida and the Hernadez family had me feeling a certain type of way.

Then, during the protest, her still showing up, and not stopping Yoli from throwing detergent – TRASH! For while I get her and Lyn don’t like each other, it isn’t like Lyn has gone out of her way to make Mari’s life hell in their household. She may not have liked her there, but we never saw her make comments or treat her with any cruelty. Hell, considering she saw what Lyn’s childhood was like, it would have made you think she got why Lyn is as she is.

Yet, I guess the short amount of time with Emma and Lyn in her life doesn’t compare to Yoli and the rest. So she had to stand to the side and end up guilty in both parties eyes. Even if that meant, potentially, losing both in the process.

Eddy Finds Victor & Nothing Comes Of That - 65%

Mari Just Watching As Lyn Was Attacked By Yoli - 70%