You Complete Me, Ho is an autobiographical comedy special noting the highs and lows of comedienne Ken Jeong from being a doctor to Crazy Rich Asians.

Table of Contents show
1 You Complete Me, Ho Plot Summary
2 Highlights
2.1 It Being Ken’s Life Story
3 On The Fence
3.1 Jeong Is Funny In Sprints, Not Necessarily For an Hour
4 Overall: Mixed (Stick Around) | Available on Netflix
5 Follow Wherever I Look on Twitter, Like us on Facebook and Subscribe to the YouTube Channel.

You Complete Me, Ho Plot Summary

It has been a little over ten years since Jeong got his first big break in Knocked Up, and the journey from a doctor who failed the board exam to one of the most recognizable comediennes has been a long one. It has included films like The Hangover, which led to Jeong having to defend himself against his own community. Also, it includes a significant crisis in his family when his wife developed breast cancer. Both the highs and lows of how Jeong ended up at the Ice House are dove into to remind you that while comedy may not be the best medicine, it should be part of your daily regime.

It Being Ken’s Life Story

While all comedy specials are personal, since the majority are written just by the performer, Jeong took it to the next level. Similar to Iglesias’ recent special, there was a mix of comical interactions with celebrities, alongside moments they can laugh about now, but brought them to tears at one time. For Jeong, it was his wife of 16 years having breast cancer – not too long after his daughters were born. Also, there was the feeling of failure when his show Dr. Ken was canceled. Yet, showing faith or perseverance is a trait all should have, things came into his life to dig him out of a hole. 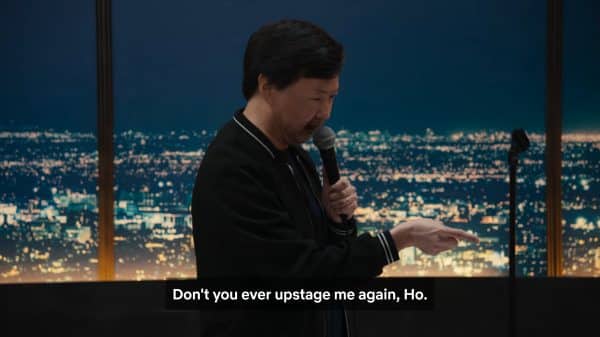 Ken Jeong: Don’t you ever upstage me again Ho.

But, don’t get me wrong, the special isn’t all doom and gloom, with some comic relief. From jokes about his wife’s last name being Ho, among a few audience members, to commentary about being Asian, Jeong will make you laugh far more than make you feel touched by his openness. Leading you to be surprised this is his first stand-up special.

Jeong Is Funny In Sprints, Not Necessarily For an Hour

I’m going to chalk this up as just not being a fan of Jeong’s sense of humor, but while funny when it comes to one-liners like, “But did you die?” an hour feels like a bit much. For there comes the point when his gloating about his money becomes a terrible running gag, as much as all the Hos in the audience. Leading to you feeling like Jeong is like the class clown who was allowed to say what he wanted for the whole period. Which, at first, you thought was funny and a hilarious experience. However, in time, you realize the minimal exposure he had before someone cut him off is what maintained his luster. Jeong is funny, and with him talking about his wife having cancer and the effect of losing Dr. Ken, you can perhaps see him in doing something serious one day. However, Jeong shows himself to be the kind of comedian who is good as a supporting player to boost a production, but when squarely focused on him? The luster he brings rusts rather quickly, and you realize what comes off as funny in short doses becomes increasingly annoying long term.

Hence the mixed label. While a quality special, it isn’t the kind you’ll revisit over and over. It’s good enough for Netflix’s desire to release multiple specials in a month, but by no means does You Complete Me, Ho seem like the triumphant event it should be. Especially considering how long Jeong has been in comedy.