We get Grace’s origin story and get the family’s reaction to the events of episode 8 “I Heard a Rumor.”

From what it appears, Grace might not have been made for all the kids so they can have a mom. The truth seems to be, Grace was made for Vanya since she kept hurting, maybe even killing, the nannies that Reginald would hire for her. So, he made someone who couldn’t die, get injured, or have the ability to be afraid of Vanya.

Allison lives! However, it seems Vanya cut her throat at the exact point to keep her from using her powers on her, or perhaps anyone else, ever again. But, her being alive is all that matters, right? Though, even with her living, Klaus is ready to go back to doing drugs after being sober for nearly 2 days. However, Ben, somehow, physically knocks the pills right out of Klaus’ mouth. Thus helping him realize that there are more to his powers than he has ever known.

As that happens, Hazel comes by since he wants to help stop the Apocalypse, but with Leonard dead, Five thinks it is over. Then, a few seconds later, Diego walks into the room, and there is a fight. One which ends with Five knocking Diego out for while he doesn’t care about Diego and Hazel fighting, Diego biting Hazel he found uncalled for. Plus, since Hazel wasn’t aggressive to him, he wasn’t for the shenanigans.

Also, considering Hazel was willing to drop off the murder weapon for Det. Patch’s case, it shows he isn’t really a bad guy. Doesn’t mean Diego forgives him, likes him, probably won’t come for him again, 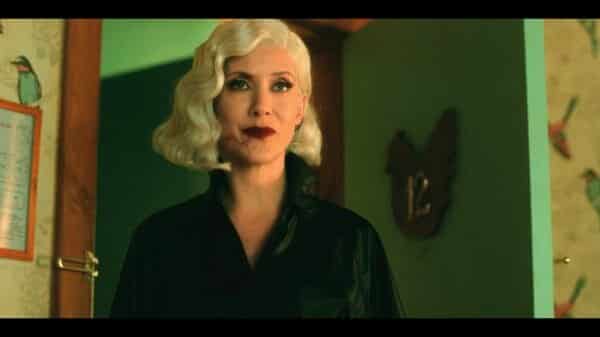 Cha-Cha meets Hazel when he comes back from visiting the Umbrella Academy, and she has Agnes set up and ready to die. But, they get into a tussle which gives Agnes sometime. However, you know how this show is – comically, they keep bumping the platform she is on which brings Agnes closer and closer to death. Seemingly just by drowning, but maybe by electrocution. I can’t see drowning being the way Cha-Cha would want Hazel to watch Agnes die. After all, if he still has fight in him, he could save her. But, in the long run, the fight ends in a stalemate since, surprisingly, The Handler, with a briefcase, is alive and seems ready to fix what Five caused. That is, assuming he is even going against the timeline.

Why do I say that? Well, after killing Leonard, slicing Allison’s throat just enough to make her mute, and trying to apologize to her family, Luther knocks her out and puts her in a soundproof room. In doing so, Vanya flips out, begins to hallucinate and all those troubles she grew up with? Those insecurities? They start picking with her, and it makes her feel isolated, alone and then wanting revenge. So, using the sound of her heartbeat, she breaks out the soundproof cell, with white eyes, and leads you to believe that, despite Five’s efforts, all he did was change the way the apocalypse would ultimately happen. This highlight stems from lowering expectations partly. I gotta say, taking note of Vanya’s journey, while not over the moon, I appreciate it. As noted early on, Page has played her role very differently from the rest. While everyone else has a sort of light and cheeky vibe to their characters, she played serious, alone, and honestly felt like she was in a solo show that starred Vanya sometimes. Yeah, the show isn’t shot that way, but I could imagine a fan edit fixing things up which could make it play out that way and work.

But, getting back to her journey, be it because of Page or how she has been written, I must admit I got a little teary eyed. Taking note of her full journey from someone sold to a stranger, her powers being suppressed and then her getting isolated, rather than given a new role in the family, and living with the thought she is unremarkable most of her life, that was sad enough. However, unlike most characters on this show, I felt like Page got to break through, with credit to her younger counterparts, and became more than a bunch of sad facts but formed a tragic person. One who was stripped of her power, agency, and developed the belief she wasn’t lovable.

I’d even argue, to a certain degree, she helped complicate Allison a bit. For while the whole “We haven’t seen each other in 12 years” thing is repeated every episode, Allison is the only one we’ve seen during that period who mentions the others. With those bedtime stories, her daughter asking about her aunts and uncles, asking about Vanya specifically, you get a sense of guilt. You get that hint of complication which makes these characters seem human rather than characters made up to be zany and unique enough to escape Marvel or DC character comparisons.

For, think about it, Allison all these years had to hold it inside her that she is the reason Vanya sees herself as she does. Closes herself off as she does, and while their siblings have a hand in it, she didn’t pursue trying to make Vanya feel special. Heck, being that Vanya is the only other girl in the house, there are things they could have shared – even considering Vanya isn’t that much of a girly-girl.

And taking all that in, what did happen and what could have if everyone made an effort, it makes Vanya going off not only understandable but a little bit painful to watch. For just as she became willing to open herself up, got her first taste of love at 25, it was stolen from her. Tainted from the start by the very person who set her on the path towards the misery she just thought she was breaking the cycle of.

The Handler Is Alive?!

Was this a shock? Kind of. But at the same time, we don’t know what Hazel, Cha-Cha, or The Handler are. We know Five is some kind of human, but everyone else? Well, considering Ben was able to bring about some monster from, unconfirmed, another dimension, who knows?

Could Ben Interact With His Siblings?

Ben’s death still hasn’t really been gone into. We know the monster he unleashed probably killed him, but who he is beyond a snarky ghost that is around no matter how high Klaus is? That’s a mystery. So with Klaus’ powers developing, or rather recovering, to the point he can interact with living beings, maybe he might get his due. But, since the next episode is the finale, there is also a strong chance he’ll remain a ghost who doesn’t often say or do much.

I get Luther is a big dude, but surely she could have tried other ways to free Vanya. Which includes going to open her cage after hours. But, I guess, it’s more about the gesture than effort right?