The Umbrella Academy: Season 1, Episode 8 “I Heard a Rumor” – Recap, Review (with Spoilers) 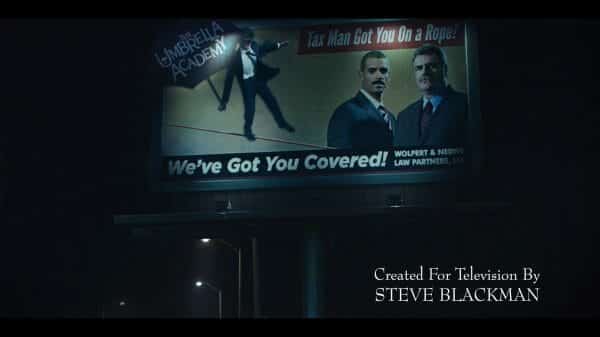 The truth behind Vanya’s powers, and her forgetting them, are revealed. Also, more info on Reginald’s death is provided.

On The Run: Cha-Cha, Hazel, Agnes

As could be expected, Cha-Cha breaks free and is gunning for Hazel and Agnes. Knowing this, Hazel drops Agnes off and preps for Cha-Cha catching up with them. Hoping that he could either kill her, talk her out of this, and maybe enjoy the last two days the world exists with his love.

Pogo confirms what Klaus spoke to Reginald about in the afterlife. Reginald did indeed kill himself and had Pogo and Grace in on it. Pogo for he was the only one he could trust, and Grace by programming her not to do first aid. Now, as for how he gave himself a natural death, or whether he paid the coroner? That’s sidestepped. All we see from this is Luther decide he needs another day alone, this time just drinking, but this ends rather quickly.

Why? Well, after Diego gets out of prison, he reveals to Luther that Allison is in trouble and that ignites Luther going from retiring from being a hero to putting a proverbial cape back on.

There Was An Accident: Reginald, Leonard, Vanya, Allison, Luther

When Vanya was a child, Reginald, like he did with the rest of the children, did experiments to see what their potential was. When it comes to Vanya, while her powers dealing with sound were extraordinary, there was a fear that because her emotions were tied to her ability, they might be too dangerous. Enter Allison, and her abilities, alongside medication. The combination of Allison making her forget, and the medication, kept Vanya’s powers at bay.

However, with Leonard throwing away said medication, and picking up where Reginald left off, Vanya’s powers are gaining strength and seem to remain uncontrollable. A prime example of this is when Allison reveals Leonard’s truth and Vanya can’t deal with that, or Allison revealing that she is the reason Vanya forget she was special. The swirl of emotions Vanya feels shake the room, and with Allison threatening to make Vanya forget again, with the strings of her bow, Vanya kills Allison.

This is done just before Leonard returns from killing the sole witness who lived from the attack, who he paid to attack him. Also, they leave within maybe a half hour or more before Luther and company show up. Thus leaving us seeing Luther crying over the love he lost.

Can These Characters Get Layers?

Is it just me, or are most of these characters still, two episodes from the finale, two dimensional? Even taking note of Allison, while she got everything she wanted with her voice, there isn’t a strong push to acknowledge how terrible it was for her to manipulate so many for the things she has. Instead, we just don’t see her use her powers at all, even when it would help, because they want her to look redemptive and maintain the appearance of a hero.

On the flip side, we see with Reginald and Cha-Cha the same issue. At this point, Reginald could be crafted to be a bit complex. As noted previously, he could have been a billionaire who wanted to do more. Heck, they could have played into the idea he didn’t know how to be a father but knew how to be a provider, hence the way he treated his kids. Same with Cha-Cha. Not to say everyone needs a backstory, though I would love to see Ben’s final days, but with Cha-Cha, if we aren’t going to make her a formidable villain, let’s make her a sympathetic one.

Which may lead you to say: What about Hazel? Well, you may have got me there. But, him being revealed as someone getting soft and wanting love only seems notable since his baby steps are far more than we get out of the rest of the cast. Making it so, if expectations were lower, maybe it could be a highlight. However, considering the cast and the budget this seems to have, that little blip on this criticism isn’t enough to derail the opinion.

What About The Other Kids?

Is it wrong to question where are the other kids, if they too have powers, or if it was only these 7? With a lack of investment in most of the characters we know, I find myself questioning will the other 30 some odd kids pop up in the finale? Maybe they got recruited and became part of the time assassins? If not workers for an organization we haven’t been introduced to?

The Death of Allison

Even with us meeting Claire, seeing Allison and Luther have their moment, and… well, she hasn’t any other notable moments, her death felt anti-climatic. Not just because Five still has a suitcase to time travel with, but because she was never made to be some form of a hook. First and foremost, we have yet to see modern-day Allison use her powers due to guilt – outside of on her daughter to make her go to sleep. Secondly, while she has talked about getting to Claire, her issues with custody, and things like that, she has been so easily swayed into doing anything but what she verbally says she needs to do.

Which is all to say that, despite her being the one with the power to make other people do things that might not be in their best interest, it seems a lot of people are doing that to her. She is the one who took the lead on looking into Leonard, reconnecting with Vanya, and has played Luther’s love interest. This is despite Leonard being none of her business, maybe making wiping out Vanya’s memory a family reveal, and when it comes to being Luther’s love interest? They could have just dropped that. That storyline is so dead that it not existing in the current timeline is just fine.