The Umbrella Academy: Season 1, Episode 7 “The Day That Was” – Recap, Review (with Spoilers) On top of Reginald making an appearance, so does what might be God. Also, we learn what Leonard has been hiding.

Is That You God? It’s Me, Klaus: Luther, Klaus, Reginald, God

With no rhyme or reason as to why he was sent to the moon, besides just to be out of the way, Luther has taken to drinking. He even wants to escalate it to drugs, so he tries to get Klaus to help with that, but he refuses. Also, he roughs Klaus up a bit to try to coerce him to conjure Reginald but with Klaus still drugged up, he can’t.

However, when Luther goes out to get drugs on his own, ending up at a rave, and Klaus goes to get him, at the urging of Ben, Klaus does see Reginald as well as a little girl who might be God. But, we don’t learn much about her besides that she can be a little rude. As for Reginald? Well, as noted in the next section, he can be curt and gruff, but we also see where Five gets his pragmatic side. For Reginald reveals he committed suicide to bring everyone together for there wasn’t any other option.

He also reveals Klaus has only touched the surface of his powers, he knew something was coming, and there was going to be more. However, by that time, Klaus woke up from his coma. One which happened because Luther stole someone’s girl and Klaus was trying to protect him. Yeah, scrawny Klaus was trying to protect a guy who had a good back and forth with a trained killer from some random dude and a few of his friends.

The Past Biting You In The Ass: Leonard, Allison, Diego, Five, Reginald, Grace

Leonard is Harold Jenkins. Also, he was born the same day as members of the Umbrella Academy, but his birth wasn’t immaculate. However, with sharing a birthday with everyone, and having the dad he had, there were hopes he was special. Unfortunately, he wasn’t, and Reginald made this quite clear. You see, before killing his father and going to jail for 12 years, Leonard tried to run away and join the Umbrella Academy. However, Reginald thoroughly embarrassed him and some members of the crew, Luther being one, dismissed him.

Hence, after killing his dad, going to jail, and yet somehow still having his childhood home, he destroyed most of his memorabilia and plotted revenge on the entire Umbrella Academy. Not just Reginald, but every last one who rejected him and didn’t try to stick up for him. Hence him being attracted to Vanya since she is the only one who may understand.

Most of this information Allison, Diego, and Five learn when they break into his house. But, with Five seemingly breaking down, or maybe a bullet from The Handler’s gun hitting him, or one of the explosions affecting him, he’s hurt. Making Pogo fixing Grace a fortunate thing since she takes care of the wound.

Remember Detective Patch? Diego’s possible ex? Well, due to Diego leaving his prints and more all over the place, maybe being set up, he is considered a suspect for her murder. This makes it so Allison is forced to go after Leonard alone and hopefully convince Vanya of the truth. But, that might be hard. For one, Leonard really has his claws in her, and with him helping her learn about her powers, he is only getting deeper and deeper into her heart. Add in he gets an eye beat out of him, and that may make it hard to convince Vanya to leave his side.

Leaving the Cha-Cha and Hazel situation. Long story short, Hazel decides he is going to quit and gets the jump on Cha-Cha so that she can’t kill him. Something she was only going to do because she was hurt to find Agnes and Hazel together. Again, with there being no confirmation she has feelings for Hazel, but it definitely being clear she doesn’t like change.

But, being that Hazel has gone soft, and can’t bring himself to kill Cha-Cha, he leaves her handcuffed and makes a break for it.

There is just something off about how emotional scenes are written and performed on this show. All things considered, Luther’s breakdown was a long time coming. He has been struggling with the idea no one sees him as a leader, he doesn’t have purpose, and he has no life. Outside of Allison, who moved on, he hasn’t known love or affection. All he had was a robot, a modified ape, and a disengaged man he repeatedly risked his life for.

But, when it came time to breakdown, I got nothing. Granted, they had Luther take the route of drinking and drugging his problems away, in a slightly comical fashion. However, is it wrong to not expect more?

When it comes to this show, I feel like I’m being far too critical at times. Yet, then comes the handling of Leonard being revealed as Harold Jenkins. It would be one thing if Leonard wasn’t made into a notable weirdo who likely is hiding something, then the reveal would mean more. However, all this backstory did was clean stuff up and help fill in the details for what you might have guessed already.

Pushing me to think, if this show had an air of mystery to it, maybe a slight noir feel, perhaps it would be better? 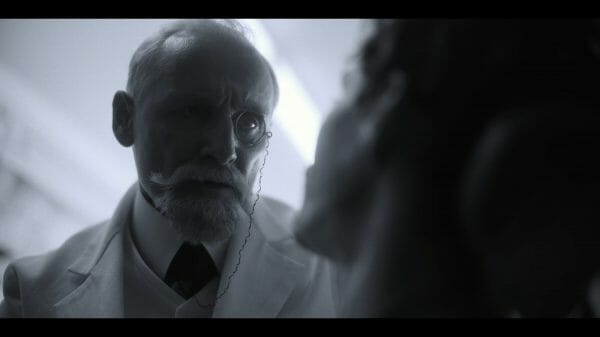 As part of the series wasting opportune moments, perhaps so it can never be taken too seriously, Reginald’s one chance to be a more mature version of Five is wasted. With him noting he had to kill himself so that the team would rejoin, we see Klaus cry. In that moment, we could have had clarity on maybe Grace was made to provide the love while Reginald helped them reached the potential? After all, with him being rich, they could have added that maybe he wanted to do more than waste his money at a charity he wouldn’t be involved in? Maybe he wanted to directly put his money towards something which would change the world?

Yet, if they humanized Reginald like that, would that have made things better or worse? Honestly? Probably worse. But, there remains the desire to have at least one character feel complex.

Heck, even with the Cha-Cha and Hazel situation, while clear Cha-Cha has feelings, it seems this show – I don’t want to imply the show needs to be obvious. More so, I think it has a problem of knowing when to let us in, and when to keep us guessing. With Leonard, keeping us guessing would have been ace. Also, things could have been more complicated when it comes to Cha-Cha and Hazel.

However, on the flip side, the Temps Commission could have been broken down more before destroyed. But, I think I’m trying to look at Umbrella Academy as something which should be taken seriously – and that’s the core problem. For maybe it is a comedy that just has serious moments, and some sprinkled action? That is, unless this is just not made to really be geared to a genre and that’s why it is all over the place.