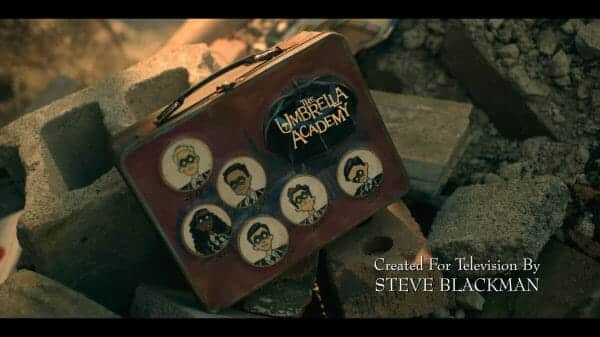 Alongside questioning what is going on with Vanya, there is a need to question who is “The Handler,” what is “The Commission” and are Five’s efforts futile?

Due to all the time jumping Five did, it isn’t clear how long he may have been an assassin, but we do know he killed Stalin, might have caused world war I, and might have been meant to be John F. Kennedy’s assassin. Why? Well, he agreed to the job of eliminating threats to the master timeline. A job he did faithfully, no matter if the person was good or bad.

However, he wasn’t the only soldier. Thanks to Hazel’s briefcase, Klaus likely ended up in 1968 which means he went to the Vietnam war. Mind you, for a little less than a year, but Klaus has some fond memories of it. Well, at least of a soldier named Dave who he was deeply in love with. Talking to Diego about this allows them to bond as well as Diego coming to Klaus’ defense when he causes a bar fight. For with Diego losing the love of his life violently, rather recently at that, he is a bit vulnerable.

Vanya is straight up in love with Leonard, but because of Allison’s experience with weird men, she can’t let her sister be happy. She tries to do a background check on Leonard and can only come up with a picture from a 1964 newspaper. When she goes to his house, it seems normal, but she doesn’t go into the attic because Leonard comes home. But, considering how happy Vanya is, to the point it seems her long-suppressed powers are manifesting, maybe this could be good that she is in love with Leonard?

Then again, Five is still searching for who or what caused the apocalypse and Vanya is moving up the list of possibilities.

Would You Like A Position In Middle Management?: The Handler, Cha-Cha, Hazel, Agnes, Luther, Five, Diego, Klaus

All these failures are really putting things into perspective for Hazel. He spends all year working, doesn’t even have a real place to call home, and as he often complains, things aren’t getting better. But he doesn’t say all this to Cha-Cha because, well Cha-Cha is a company girl. She may not love how things are going, but it is what she has committed her life to, and that’s why she knows the training manual inside and out.

However, for Hazel? Nowadays he just wants to spend time with Agnes, look at birds, maybe hold her hand a little bit. Well, at least until Five tries to create a meet with them and the duo of Klaus and Diego tries to kill them. From that point, the dream is deferred.

But, as seen by Five, quitting isn’t easy and according to the deal The Handler gave Five, maybe all this work lasts for about five years? How many more does Hazel got to live through right? Well, thanks to Five tricking him about the briefcase, Klaus and Diego trying to run him and Cha-Cha over, and Five meeting with the Handler and making a deal to save him and his siblings, Hazel may never make retirement. Instead, he’ll either die in the apocalypse or find Five ending up becoming his supervisor.

Vanya Is Special After All

Be it Ellen Page or the downtrodden life Vanya has had, learning she is special is a tad bittersweet. It’s fantastic because it means she could do something wonderful and change the world. However, with the looming apocalypse, there is the need to question if she caused it. After all, when Five found his family members, we didn’t see Vanya.

This May Not Have Been Made To Binge Watched I’m starting to think Umbrella Academy wasn’t made to be binge-watched. There is just something increasingly tiresome about watching these character archetypes. Not to the point of saying they are predictable, but they definitely don’t feel like they are stepping out of the familiar. Luther’s need to be the leader is not drawing any interest and as nice as it is that Diego is reconciling with his brothers, something about his character remains kind of flat.

Then with Allison? I don’t want to call her a token, but I do wonder if she’ll ever say or do anything interesting? Yes, her discovering Leonard might be misrepresenting himself gives her something to do, but it doesn’t make her feel necessary. Though, maybe that is the issue in general, none of these characters feel like a hook to get you watching until the end. Add on the pending apocalypse hasn’t been made that urgent or interesting and you get a rather draining show. One which doesn’t seem like it’ll get better, or worse, but maintain its pace and thus seem like it is going to more so rely on the dark superhero phase than try to really stand out.