Somehow, The Umbrella Academy turns things around for what made for quite the finale – until we were left with a cliffhanger.

Table of Contents show
1 The Love Of A Violin: Reginald, Abigail, Vanya
2 One Last Meeting: The Handler, Cha-Cha, Hazel, Luther, Five, Diego, Allison, Klaus, Vanya, Pogo
3 This All Never Happened: Five, Vanya, Agnes, Hazel, Allison, Diego, Klaus, Ben, Cha-Cha, Luther
4 Question(s) Left Unanswered
5 Highlights
5.1 There Wasn’t Just One Emotional Moment
6 On The Fence
6.1 Cliffhangers Are So Cheap
7 Follow Wherever I Look on Twitter, Like us on Facebook and Subscribe to the YouTube Channel.
7.1 Check Out Other TV Recaps

The Love Of A Violin: Reginald, Abigail, Vanya 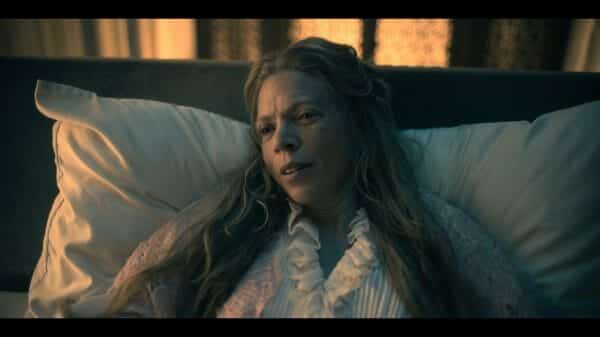 Reginald was an immigrant. One who left a dying wife to come over and start a new life with an umbrella shop. But, before leaving, he acquired a violin, thinking his wife would play it, but it ended up being something to remember her by. So, fast forward many years, as much as you may think Vanya’s playing the violin may have just been a hobby, as with many things on this show, it was Reginald, subtly, connecting with the kids. Why else would he allow a child he supposedly hated to play the last thing, maybe the only thing, which connects him to his wife?

The Handler didn’t die in 1955 and seemingly hasn’t aged since then either. Somehow, she found a way to the present, healed, and even has a suitcase. Also, she has a deal on the table. Protect Vanya and Cha-Cha will get a new partner and have her record expunged. Then for Hazel, he and his love can go where they wish, with no penalties.

This seems nice and all but with both knowing the apocalypse is coming, it is acknowledged this is BS. Also, being that Hazel is aware that you can’t just resign, he decides it would be better to kill Cha-Cha or attempt to by causing a car accident, and then kill The Handler, than see if she may keep her world. As all of the aforementioned happens, Vanya leaves the academy destroyed, with Grace and Pogo going down with it. Specifically, with Pogo, he gets killed by being violently mounted on some antlers.

Because of that, the family meets on how to handle Vanya and the idea almost universally agreed upon is that she can’t live. The only one against it is Allison but with no voice, but the ability to whisper, she is shut down. But, I would be remiss not to note a sweet moment which comes after Allison’s attempt to save Vanya gets defeated. Said moment is when Allison tries to speak to her daughter and with that not being an option, Luther does for her. Leading to him speaking to his niece for the first time. 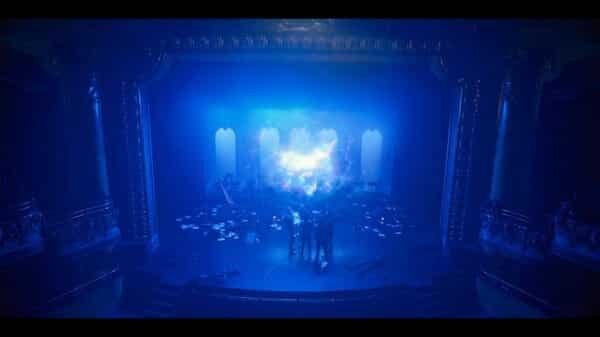 Vanya makes it to the theater, and things were peaceful at first. She was simply playing her song, and nothing was happening. However, upon her siblings arrival came the BS. But, at first, things were fine. Allison planned to be supportive, show up, and for a moment Vanya just smiled and kept playing. Then her brothers decided to try and nab her, and all hell broke loose. Wave after wave of sound was flung, and then Cha-Cha showed up. That would be a major thing if she didn’t nearly die because of Hazel, making her fight with Diego kind of lackluster. Especially since, when he decides to spare her, she just retreats.

But, she isn’t the main course, the big deal, Vanya is. And with her brothers and sister regrouping, once again they try to stop her from causing the apocalypse. Well, after The Commissions soldiers try to kill then and Ben, who Klaus manifests, uses his powers to kill them. I digress though, point is, they try to stop Vanya, who is playing long after everyone ran, and when they get too close, she uses her powers, which now have become some kind of ray of light and lifts her brothers. She then drains her brothers of their life force and what stops her is Allison shooting a gun by her ear – knocking her out.

Which may lead you to believe it is all over, but all that energy had to go somewhere, and it ends up going to the moon. In fact, it hits the moon and causes a meteor to haul towards Earth. But before it destroys all life, Agnes and Hazel getaway thanks to him stealing the Handler’s briefcase. Also, the members of the Umbrella Academy, including Vanya, are taken away – the last minute – thanks to Five’s powers.

Thus leaving us on a cliffhanger. There Wasn’t Just One Emotional Moment

Unlike most episodes, there wasn’t just that one moment which sort of touched you a little bit. It was some girl smiling at Vanya, despite Vanya looking like an Anne Rice vampire. There was Luther talking to his niece and you hearing her call him Spaceboy and Vanya smiling when Allison showed up to her gig – even after all the destruction she caused. Also, there was Klaus finally getting to show that he is worth something to the team besides comic relief.

The gather of these moments, as well as Five noting they could change the timeline by just being kind to Vanya, it gets you a little emotional. Maybe not enough to excuse how dull most of the season was, but we’ll get to that in the season review.

Cliffhangers Are So Cheap

Cliffhangers are sadly necessary tools to drum interest, and with Netflix being a data-driven company, I’m sure social media reactions are also important – since mad people probably share their Netflix account. But, considering how we see everyone get younger as they jump, since that seems to be a side effect of jumping back in time, when Five does it without a briefcase, having the season end that way was aggravating. But maybe it is because, after hemming and hawing through this show, I was finally getting into it then got cut off. Just when it seemed the kinks were worked out and this could truly be enjoyed.

Meet The CharactersPurchase The Graphic Novels This Is Based On: Volume 1, Volume 2, Volume 3 (You Can Get Volume 1, And Access To Many Other Books With Kindle Unlimited)
You Might Be Interested In