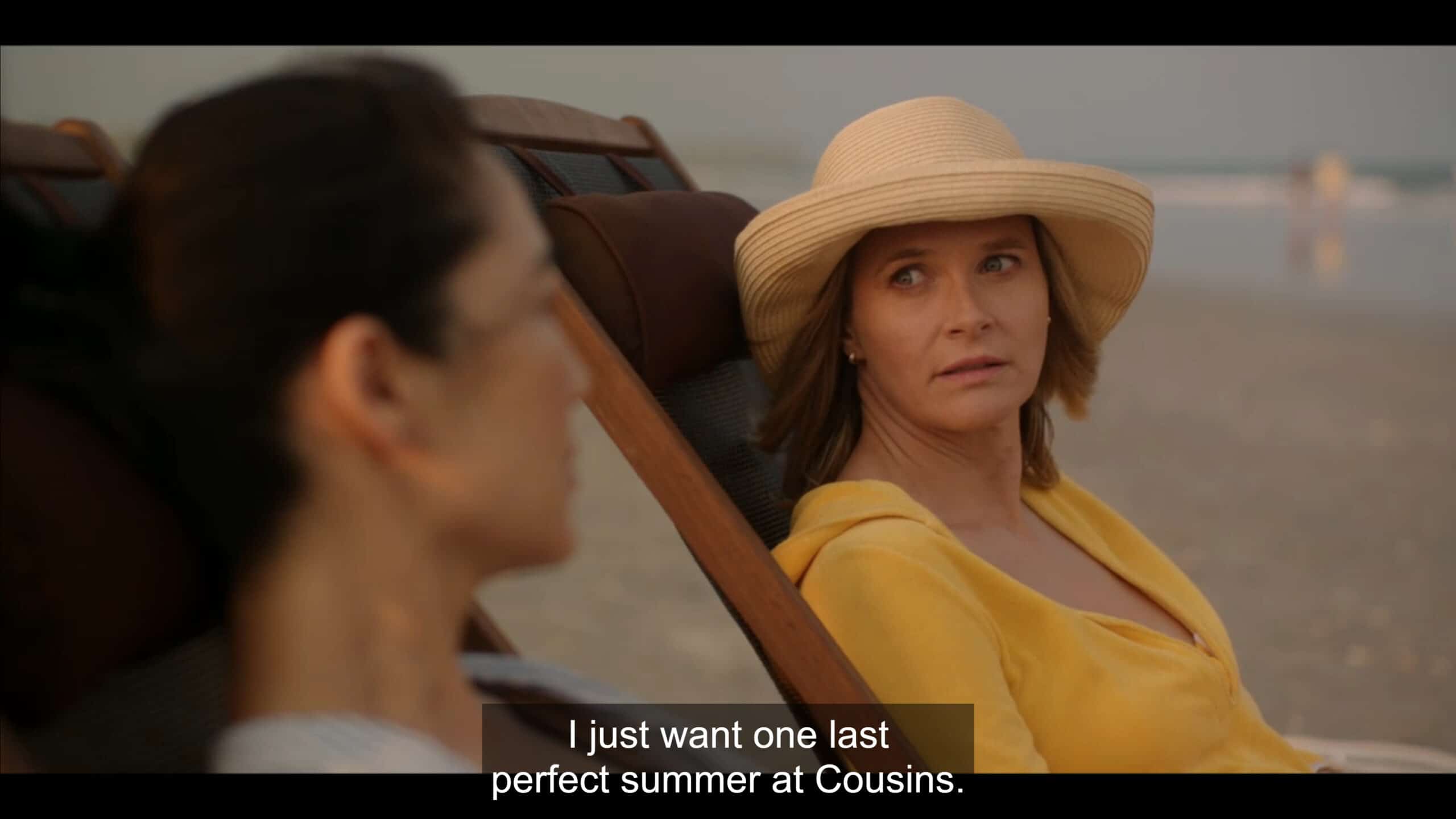 Alongside Taylor showing up and causing some drama, Laurel pushes Susannah to reveal something shocking to viewers.

With it being Belly’s 16th birthday, it pushes her to remember all the traditions that the family has had for it. However, one dear memory is when she perhaps developed her crush on Conrad when he educated her on what the infinity symbol looked like and meant. Remembering that makes it hurtful that, while everyone else gives and properly acknowledges Belly’s birthday, he doesn’t. Or rather, he pretends he didn’t give a gift, for whatever reason.

Which likely pushes you to wonder what his problem is, right? Well, Laurel was tasked with figuring that out, but with her making assumptions it’s about Aubrey, Conrad’s ex, as of April, she jumps the gun and doesn’t get the truth. Something that not only she and Susannah want to know, but Nicole too. Being in limbo with Conrad is getting frustrating, and while she isn’t at the point of no longer wanting to be something to him, the situationship is draining.

But nothing can be as draining as Taylor. She has main character energy and comes in swift and chaotic. How? Well, it starts off light with her insecurities showing, as she struggles with Belly having friends outside her who are very different from her. However, it really comes to a head when she hooks up with Steven.

Now, how does that happen? Long story short, Taylor has liked Steven forever, and while she is as flirty as Jeremiah, her heart is truly stuck on Steven. As for why he participated? Insecurities. As Laurel has hinted multiple times, her family isn’t rich by any means, and that attitude has made Steven feel lucky to be with Shayla but also fearful he can’t keep up, So he decided to self-sabotage.

He isn’t alone, though. Conrad, who is working with Cleveland so that Cleveland can authentically talk about sailing, is inconsistent. But rather than getting mad, as perhaps Conrad wants, to justify his guilt and feelings, Cleveland seeks to understand without any assumptions or an agenda. Perhaps leading to Conrad really getting to open up and have someone he can honestly talk to. And considering we learn Susannah has cancer and has no desire to continue treatment, this couldn’t come soon enough.

Besides adding to the bi-sexual representation in “The Summer I Turned Pretty,” Cleveland also seems to be what may crack Conrad open. The way Susannah and Laurel make it seem, if Jeremiah is a Golden Retriever or some other overtly friendly dog, Conrad is Eeyore. Which isn’t to say Conrad doesn’t want to open up, but as shown by Susannah and Laurel, they don’t leave space for silence for him to talk. Heck, the way Conrad acts, it might be that he feels like a burden for making them worry and have to think twice about how he feels.

But, that is the benefit of Cleveland. Like a therapist, he is a third party with no promise of long involvement and is rather separated from everyone else. So if Conrad opens up to him, he can know his thoughts and feelings are safe and won’t spread about the way many things do in Cousins.

To begin, Steven is as much at fault for what happened, if not more, considering he is older than Taylor, is dating someone, and should have known it would be inappropriate to be alone with someone at a party. With that said, was that all Taylor was supposed to show up for? To hook up with Steve, throw a wrench into his relationship, and put an exclamation mark that Belly is changing?

Steven and Shayla had enough issues because they were in different socio-economic classes. So adding this Taylor drama was unnecessary; the same goes for Belly. Every other scene featuring Laurel or the boys has them noticing how she is changing. Viewers did not need yet another co-sign that Belly isn’t the same girl from when summer began.

But with that said, it is appreciated that Taylor was shown to be a real best friend rather than someone who was noted that at the start of the season and never heard from again.

Belly Refusing To Let Her Feelings For Conrad Go

It’s only episode 3, and, oh god, it is only episode 3. Note, Belly has likely had a crush on Conrad for 5 or more years now, but the fact Cam is right there, wants her, and is everything she could need right now, but Belly is hooked on Conrad?

Didn’t she just say her crush was dying or dead? Can someone please take the defibrillator from her so these feelings can finally flatline?

Learning Susannah Has Cancer, And She Is Just Trying To Enjoy What Time She Has Left

You’d think the first three episodes were for free as part of a trial on Prime Video with the drama and teases coming from this episode. You got Steven cheating, Conrad staying over at Nicole’s, Belly prepping to curve Cam for not being Conrad, Jeremiah being flirtatious to the point of wondering how promiscuous is he really, and then learning Susannah has cancer?

As the Mo’Nique in “Precious” .gif shows, it is just too much. All the feelings of this being rather balanced in episode two have been punted, and it’s hard to say if, as all of this gets unpacked, we’ll be able to get back to where we were.

Wondering Where Things Will Go With Jeremiah

What is the plan for Jeremiah? Right now, he is the flirt who always is ready to compliment Belly and may eventually throw his hat in to take her to the debutante ball, much to the chagrin of Gigi. Is that the point of him being here? To add something else to Belly’s plate?

How about a storyline dealing with what he is going through as an individual? It doesn’t have to be something bi-phobic or averse. Isn’t he a year or so off from college? What are his plans, and what does he want to do? Jeremiah has the gift of gab, so does he want to get in marketing or sales? Is there more to him than potentially being the village bicycle or yet another person to make Belly’s summer memorable for all the wrong reasons?

The Summer I Turned Pretty Directory

The Summer I Turned Pretty: Season 1/ Episode 3 “Summer Nights” – Recap/ Review (with Spoilers)
Overall
“The Summer I Turned Pretty” decides to become like so many of its peers as people cheat and have shocking cancer reveals. The drama that pushes you to question whether the long-term plans here will make it worth the madness?
Highlights
Cleveland
Disputable
The Taylor Drama
Belly Refusing To Let Her Feelings For Conrad Go
Learning Susannah Has Cancer, And She Is Just Trying To Enjoy What Time She Has Left
Wondering Where Things Will Go With Jeremiah
76
Subscribe to our mailing list Follow Wherever I Look on Twitter and Instagram, Like us on Facebook, and Subscribe to the YouTube Channel.