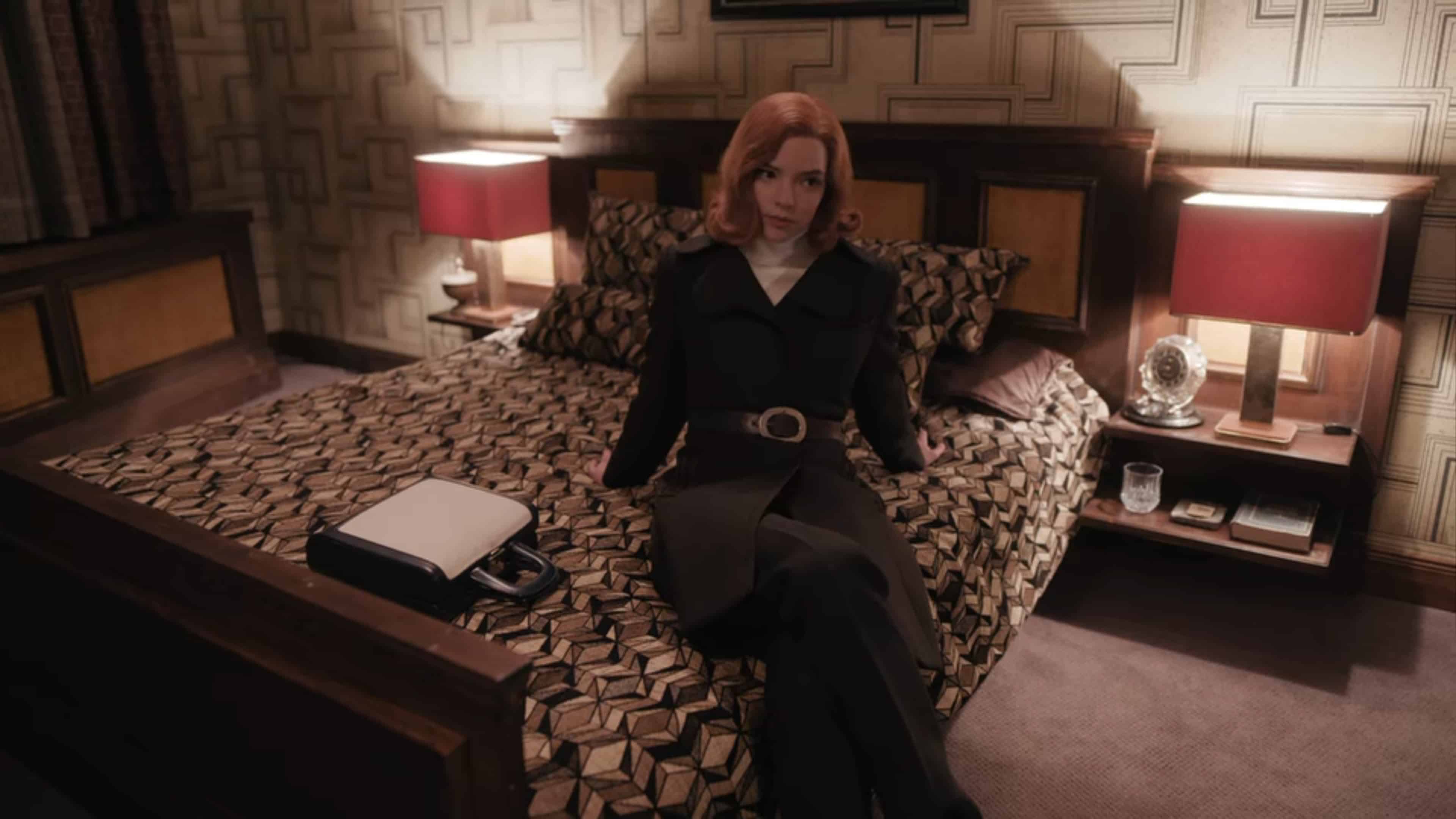 The finale of The Queen’s Gambit is a masterful finish. One which, similar to Unorthodox, will surely lead to its creators, directors, writers, and star to be a constant during awards season.

So what led to Jolene, after so many years, popping up on Beth’s doorstep? Well, the death of Mr. Shaibel. After all, he is the person who got her career started when she was 9 though there is more to Jolene’s visit than that.

Just in general, she knows Beth needs her, and though she probably needed her long before her arrival, it has become serious now. The pill addiction, the booze, it has grown out of control. But, at the heart of it, what were the pills but a crutch and means to stay connected to Jolene? Someone who taught her the beautiful things taking the pills at just the right time could produce?

Though with Jolene there in person, the pills are an afterthought. For rather than drink herself into ruin, Beth enjoys catching up and learning Jolene went to college, works as a paralegal, wants to be a lawyer, and is saving for law school. That last part is especially important since Beth, who is due to compete in Russia at the end of the year, has pretty much alienated the easier sources of income. Which makes Jolene offering to pay her way a shock.

Yet, in Jolene’s mind, this is what family does. Especially since she, like Mr. Shaibel, kept tabs on Beth, and while they never wrote letters, and Jolene is just showing up now, they never stopped loving or thinking of her. Simply put, they just admired her from a distance and was glad to be part of the foundation which created Beth Harmon.

With Jolene’s gift, Beth is off to Moscow, with an escort from the US Government, who refused to contribute a dime, and despite all those years of Russian, Beth barely says anything beyond the basics. Then again, with a man there keeping her from drinking or going out, all she has is chess, and she wins one match after another.

In fact, she becomes famous, not just back home, but also in Russia! This leads all the way up to facing the man she lost to twice and the press having a field day. It’s like the interest in Beth never waned, and she makes sure to credit Mr. Shaibel.

Why? For one, she never did pay him his $10 back, but he was also the father to Alma being Beth’s mother. And taking note of how sad his funeral was, with no one from the orphanage coming, she wanted him to be immortalized in print and forever associated with her success. Because it is due to him challenging her, supporting her, and putting up with her attitude, that she has gotten this far.

Yet, with DL Townes showing up, so comes the idea Beth is about to have a moment and mess up again. However, that is not what Townes is there for. Also, it isn’t for sex. He doesn’t outright say it but does imply, yeah, he is gay.

So, why is he there? Well, like Harry and Benny back in the states, it is to support Beth. For lest we forget, while Beth can manage on her own, she excels when she has a team behind her, and these men, even with their faults, have tried to consistently be in Beth’s corner. Even when she made it difficult or uncomfortable to do so.

And while they don’t necessarily deserve all the credit, for it is Beth discovering she can see the chess pieces move on her own, without pills, that truly do, she does defeat Borgov. Someone who, like the other masters in the tournament, are not only proud of Beth but embraces being beaten by her. Almost like, collectively, they are her father, and she is the daughter who has surpassed the teacher.

Though, after becoming a world champ, there is the question of: What’s next? Well, for Beth, it seems to be less about competition and ranks and just playing the game she loves. Hence her playing some locals in a park rather than going to after-parties, doing press, and many of the things she doesn’t necessarily loathe but certainly would omit if she could.

You’ve been the best at what you do for so long, you don’t even know what it’s like for the rest of us.
— Jolene

I’m not your guardian angel. I’m not here to save you. Hell, I can barely save me. I’m here because you need me to be here.
— Jolene

Understanding What The Pills & Alcohol Meant To Beth

Perhaps we’re reading too much into this, but I think that, as much as you can see Beth feeling the need to take pills and drink being akin to, say, Nat King Cole thinking he needed to smoke to keep the tone of his voice, that’s not the whole story. I would submit the pills, and alcohol also was about her trying to feel connected. With the pills, that was her and Jolene’s thing. It’s what Jolene provided her as a means to escape and is what enhanced her chess playing. So what those pills invoked were memories.

Which, taking note we see a lot of Beth’s memories are traumatic, remembering Jolene, her first friend, Mr. Shaibel, her first mentor, it made it so those pills were a gateway to the memories and abilities she wanted stronger. That is, as opposed to her memories of Alice, which haunted her.

Then with the booze, clearly that was all Alma. Drinking wasn’t something they did together often, or at excess, but as Beth notes to Jolene how she thinks she is just like her mom, by nature, you can see how she was becoming like Alma through nurture. Alma drank to numb herself, and that is what Beth did. To socialize, deal with life, Alma needed a drink to be friendly and worth being around, and so did Beth at times.

Yet, like with the pills, you can see this crutch had side effects. For while they allowed Beth to be fun and friendly, unlike the pills, they didn’t make her a better player. If anything, they counteracted the pills euphoria since they pushed the reminder Beth was orphaned twice by two brilliant women. Women who could have been so much more if they just had the support they needed.

This is why Beth having Jolene’s support, and then the boys, meant so much. Her mother, Alice, if her father would have just taken her for a bit, could have bounced back and become all she seemed capable of. Yet, with no aid as she went through a mental break, she killed herself and nearly killed Beth as well.

Then with Alma, taking it all in, you can see Alma gave to Beth what she wished someone would have given her. A person who may not understand the intricacies of what was going on, but still showed up, feigned excitement if they needed to, and matched their energy after it was all over. Alma didn’t get that, but she provided Beth with what wasn’t made available to her like any good parent.

And to show the importance of breaking generational curses, Beth having Mr. Shaibel, Jolene, Benny, Harry, DL Townes, and others, when things turn around like that, you see someone excel. And granted, Beth could have easily gone a different way with ending up pregnant, a full-on lush, or a drug addict. Which, all things considered, she probably should of – since the show, repeatedly, has her stop nearly on command with us only seeing withdraws when she is a kid.

But, you could say, when she was a kid and only had Jolene, and Mr. Shaibel was forced to distance himself, she was desperate. And when it came to Harry and the rest, maybe she still was yearning for closeness. However, through Jolene, I think she found the female relationship she needed to make these guys nice to have behind her, but not someone she needed the shoulder or thrust of.

For with Jolene, she didn’t have to perform. Jolene knew her story, had a similar story, and there wasn’t anything sexual there, so Beth could just be. Meaning, she could be silly, goofy, vulnerable, and it not be made into an opening. Rather, Jolene allowed it to be a shared intimate moment in the purest of ways. And when it comes to Beth, who has experienced death and having to grow up and not make mistakes due to her gender and being surrounded by older people, letting go was a luxury. Yet, what she always needed to be her best.

When this season, this show ends, Beth is in her twenties, if not 20 on the dot. So, what became of her? Beyond becoming a world champ, you can see there were desires to have both chess and a relationship? Maybe marriage and a kid, and have it all similar to how Borgov seemed to. Yet, there is no epilogue or idea of what happened after her 1968 win in Moscow

All we’re left with is this journey that ends for us at what should be just one of its peaks, not the peak.

Understanding What The Pills & Alcohol Meant To Beth - 89%

While the ending leaves you wanting more, The Queen's Gambit does remind you why limited series often are so great. For with them getting to the point, lacking the fluff added so that multiple seasons can be produced, you get the heart and soul of performances without the filler. Leaving you to hope, as much as the endings are bittersweet, that networks continue to produce more and more of them.