In an episode mostly dedicated to Morgan, and Shaun getting Carly to orgasm, we finally get to understand why she was formerly so caustic. 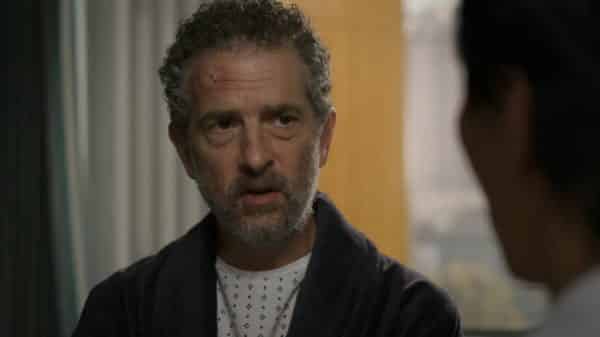 One patient, told he has 6 months to live, decides to live life to the fullest. He takes money from his retirement account, goes sky diving, and even plans to move to Costa Rica. All the while, his wife, Bella, begins to question where she fits into these plans beyond being invited? Is she no longer enough, does it matter what she wants? With his cancer being aggressive, one could submit the answer is no.

However, once he is doing better, thanks to one virus creating the opportunity for his immune system to attack the cancer, Oliver now finds himself with more than 6 months to live but a precarious relationship with his wife.

Upon learning that Carly didn’t orgasm, this causes an issue for Shaun since there isn’t too much he does that he doesn’t feel he is good at, if not a master of. However, while he can spend 100s of hours studying theory and be competent in practicum, sex isn’t something he can become good at just by reading and not actually doing it.

This is when the ladies of “The Good Doctor” come in. Morgan, by reminding Shaun they are in a workplace so talking about sex is inappropriate. Claire in trying to make Shaun feel better and present the idea Carly may not orgasm, and then Dr. Lim in giving it to Shaun straight and speaking a language he understands. Mostly in the form of not making it a medical or surgical thing, but somehow correlating orgasms with making microwave pizza helps things click. Leaving Carly, ultimately, satisfied and perhaps now happy Shaun has so many people up in their relationship. For reasons unknown, despite being retired, Dr. Glassman finds himself doing a consultation with Caroline, a famous artist, who also happens to be Morgan’s mother. Dr. Glassman is the third doctor she has spoken to, and with the clusters of some sort of abrasion or abnormalities in her brain, she is on borrowed time. Yet, the surgery she knows would save her she refuses for Caroline highly values her artistic side and, sans Morgan, it has become a family thing. Caroline is an artist, Ariel, her son, is a painter, and Caroline’s other daughter, Cassie, is a composer.

In the episode, we only get to meet Caroline and Ariel, as Cassie is overseas. But, just between Caroline, Ariel, and Morgan, we see more than enough. For example, as pointed out by Alex, the way Morgan burst onto the scene ready to compete, that came from her sibling rivalry with Ariel. Also, her sharp tongue? That came from Caroline who has always been dismissive of the more technical professions due to her family doing so well in the arts. Hence why Morgan, since she was a child, has concocted various stories in terms of her family. These have ranged from her mom being an engineer, being an only child, and so much more.

Yet, with her mom on her death bed, Morgan is back into the fold or at least trying to be. The problem with this is, she still refuses to adapt or speak in the language the family does, and this leads to her being welcomed, at least by Caroline, but her medical expertise not being taken into consideration. Thus leading her to push Dr. Glassman into a procedure he hasn’t done, all for her benefit.

Leading to, ultimately, her mother getting better, and maybe some form of reconciliation, but as for what this may mean for her relationships to her peers? Who knows? Especially considering, despite how deep she got into Claire’s business about her mom, Claire was damn near shut out when it comes to Morgan speaking about Caroline or even letting Caroline get to know Claire.

You don’t get to quit who you are.
— Morgan

Being that Morgan has changed up her story on who her parents were a handful of times, and this information told across a lengthy timespan, I can’t even tell you the varying stories we have been told. Well, beyond them having money – which is true. So to get to see her brother, mother, but not the still missing grandfather, who isn’t mentioned at all, helped shine a light on Morgan. The kind you hope isn’t quickly snatched away now that she has caught up to many cast members, in terms of backstory. For while she still has her arthritis storyline, you can easily imagine that taking a backburner to Shaun’s latest drama or maybe the absent Debbie returning and stirring things up (which I’m by no means asking for).

Setting aside the romantic possibility, it is nice to see the doctors have lives outside the hospital and conversations that aren’t about finding treatments or Shaun. For while Alex used to speak about going for drinks, and we’ve seen Claire go to the bar, amongst other places, that feels so long ago now. Plus, as much as we aren’t fond of Dr. Melendez latching onto a female doctor and acting as some sort of remoras, Claire has long needed an outlet. One that isn’t as pushy as Morgan or often finds ways to redirect the conversation to be about them, like Shaun. And who else could really fit that bill beyond Melendez considering Dr. Lim is doing who knows what and Alex is trying to keep his family together?

Is Dr. Lim Just Going To Show Up For One Or Two Scenes And That’s It?

Isn’t it amazing how we spent so much time on her becoming the head of surgery, and yet, unlike when Dr. Andrews was chief of surgery, we barely see her? And while, yes, she could be with the newer residents, that isn’t told to us. Also, considering the changes she spoke on, and how the ins and outs of running a hospital were shelved, this would be the perfect time to renew that. Maybe give Allegra something to do once more, and possibly bring in a hospital lawyer? For surely, a lot of these sudden ideas, like Dr. Glassman suddenly coming out of retirement, should require some sort of approval, right? Especially if he is going to be the first-ever to do a procedure, even if he co-founded it.

Granted, based on “Everything’s Gonna Be Okay,” it could just be Shaun having autism that leads him not to recognize his interjection could come across rude. Yet, is it wrong to say that Shaun’s storyline is slowly but surely becoming less of a highlight?

Don’t get me wrong, it is still enjoyable to see a character with autism and exploring one example of what it means to be autistic. However, as Shaun disproves society or his own set obstacles or fears, so comes the question of how much longer can this show go? Shaun, and the rest, are due to graduate soon. Will the show end once their residency is over? Lest we forget, the hospital can’t hire them all to be full-time doctors and there are classes behind them. So, what is the end game here once since Shaun’s family has been met, he has found love and has had sex?

I mean, outside of learning to drive, there aren’t any things we’ve seen him try yet that he hasn’t succeeded in. Be it through effort or intervention.

Morgan has a family! Yay!! While the “Let’s get Carly to climax” storyline started to drag for me, Morgan’s storyline was great from start to finish! I was wondering if the writers would ever let her have a family. It is almost as if they were hoping we would forget she saw her grandfather many episodes ago. So I was pleased they decided to give her a mother and brother. Whether we will ever see them again is another matter entirely. I’d say probably not. But at least we got this.

It was also good to see Dr. Lim have a few lines outside the operating room. I wonder if she will ever get a family (or a storyline). Again, probably not, even though you had some good ideas. That’s too bad.

Even though the show started out as being about an autistic doctor and the challenges he faces, it looks like the show has evolved into something different. Last year I read an interview with one of the showrunners who said (I can’t remember his exact words) something like the residents can be residents for as long as the show runs. Maybe they just don’t graduate until ABC decides to cancel the show, like the law students on “How to Get Away With Murder”. They were law students for 5 or 6 years instead of 3 years. And since we’ve never seen the classes behind them, there isn’t much pressure to move Shaun and friends along. So I think this show could last awhile if ABC wants it to.

It would be less of an issue if they didn’t date them. By noting they are third year students, it makes it so we know each season is roughly a year in time. That is, unless they decide to abandon that.

I noticed that at the beginning of this season, Dr. Lim made a big deal about the residents being THIRD-year residents, which, like you wrote, definitely dates them. Either she will need to stop announcing what year they are at the beginning of each season or TPTB will have to cancel the show. I vote the former :) !