As we learn Claire does have a life outside of the hospital, two brothers trigger Shaun’s memories of not just Steve but his father.

Table of Contents show
1 Piecing My Life Back Together: Dr. Glassman, Lea, Shaun
1.1 Commentary
2 Brothers Compensate For Fathers: Armando, Santiago, Morgan, Shaun
2.1 Commentary
3 A Contingency Plan: Kayla, Dash, Claire, Dr. Melendez
3.1 Commentary
4 Other Noteworthy Facts & Moments
5 Question(s) Left Unanswered
6 Highlights
7 On The Fence
8 Follow Wherever I Look on Twitter, Like us on Facebook and Subscribe to the YouTube Channel.
8.1 Check Out Other TV Recaps

Piecing My Life Back Together: Dr. Glassman, Lea, Shaun

While it seems Dr. Glassman’s motor functions are improving, to the point he can do yo-yo tricks, his memory isn’t doing as well. As for Lea? Well, with things in PA not going so well, and her return to the west not necessarily being that smooth as well, a dead goldfish almost becomes the straw which breaks the camel’s back. Luckily, Shaun, using some tactics he learns from his patient, finds a way to alleviate Lea from guilt and bring a smile to her face. Leaving them looking at one another like maybe, just maybe, something more may come down the line. I feel torn. A part of me would like Lea and Shaun to be together, since it seemed like that was the path they were on when she was first introduced. Yet, I also want Shaun to have a friend without said complications. Someone he can go to, outside of Claire and Morgan, who can give him advice from a place of love and admiration vs. trying to help Shaun so they can focus on a patient. If not, in Claire’s case, being friendly yet because they aren’t’ friends outside of work, her missing so much context that while she gets it, she only knows what Shaun tells her.

But, really, outside of Lea, what opportunities does Shaun have to meet someone? With him being a resident, and working as he does, he only goes to work and then goes home. The only exception to this routine is if someone he knows forces him out of it or something is added. Be it Lea pushing Shaun to go pet shopping with her or checking on Dr. Glassman.

Then again, it isn’t like Shaun has really pushed Lea, or anyone for that matter, about intimacy. So it seems, between his co-workers, Dr. Glassman, and Lea, maybe that is all the attention, validation, perhaps love, Shaun needs right now. At least until someone, be it Dr. Andrews or someone else, trigger the idea that he is missing something in his life.

Two brothers, Armando and Santiago, bicker with one another over trading a kidney for ownership of a business. During the back and forth, Shaun finds himself spending a lot of time with Armando who has a different take on his and Santiago’s father. Someone who treated what they did as never enough and Shaun knows the feeling. He remembers, in particular, his dad talking about he isn’t worth the hardship and wishing he was never born. Luckily for Shaun though, Steve, though it was a struggle, especially when they ran away, provided Shaun the knowledge he is worth it. Thus leading to the whole debacle, which Morgan tries to make bad for Armando by calling in the family, resolving fairly quickly – without Santiago giving up the family business.

Any mention of Steve brings tears. Making me wish, so badly, Evan wasn’t a one and done character. Yet, like with Claire’s mom being brought up from time to time, it does push you to wonder if these people may show up? For even if the dad is a douche, what about Shaun’s mom? Did Dr. Glassman keep her in the know about what was going on? Could it be his dad threw out the letters? Heck, maybe Shaun’s mom left his dad and could have been searching for him all this time? To our knowledge, Shaun’s name didn’t change over the years but “Shaun Murphy” isn’t the most unique name either. So maybe his mom has had trouble finding him?

I mean, considering Dr. Glassman seeing his daughter, Claire’s mom showing up last season, and us meeting Dr. Melendez’s sister, would it be wrong to ask to see Shaun’s parents? It would make for one hell of a mid-season, if not season, finale.

We finally get to see Claire have a life outside of the hospital! Unfortunately, said life deals with her college roommate, Kayla, dealing with stage 4 ovarian cancer. Luckily, while that downer exists, Kayla helps to fill us in when it comes to who Claire was back in the day. Well, back in the day and still is. For Kayla pretty much pushes out that Claire is someone who has an aversion to risk in her personal life and has commitment issues.

Leading us to learn Kayla, even in death, is willing, able, and definitely pushy, about Claire living her life. Before it was by setting her up with guys, making her pledge and fail for sororities. Now? On her deathbed? She is pushing Claire to go on dates with Dash, her husband, for she sees chemistry between the two. Something that, as you can imagine, makes Claire very uncomfortable but how do you say no to someone who is pushy and dying?

So, a date happens, and it goes well, but Claire doesn’t want Dash. Both just want Kayla to live. Which, thanks to a surgery Dr. Melendez performs, Kayla gets a few more months. However, despite Claire complimenting and making nice with Dr. Melendez, he still hasn’t forgotten what happened and thinks Claire needs to work still with Dr. Lim. 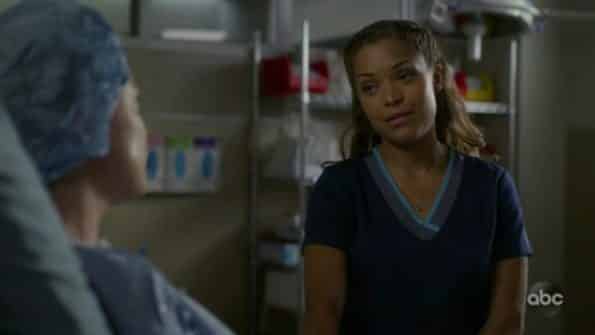 I don’t know if a person can’t legally operate on a friend but ethically, it seems like Dr. Melendez should have put his foot down. Though, perhaps the bigger thing to question is, if Dr. Melendez is one of the best, how did a woman with stage 4 cancer get pushed up on his schedule? I know, I know, suspension of disbelief but it isn’t like this hospital is the main one for some rural towns – it’s in a city. So how can someone he has one consultation with end up on a surgical table within hours? I know Claire has been, in an unofficial capacity, been working as her doctor for a while but something seems off here.

That aside, with addressing Claire’s commitment issues and how she has to be pushed to do anything, it brings back memories of Jared. With her and him, though it seems like forever ago, it seemed like Claire didn’t necessarily have a commitment issue. At least in terms of providing someone consistency. If anything, it seemed to be an intimacy issue. That is, while she could consistently have sex with Jared, being seen out with him and taking things beyond being friends with benefits was an issue.

Now, why was that? Well, that a bit harder to say. Naturally, you want to go to the parents, since it took a season and a half for us to see Claire having friends. Yet, it seems deeper than that. Maybe it is a fear of rejection? I would say Claire just not being interested in relationships but her chat with Dr. Melendez last season made it seem she does want a family. Perhaps it has just consistently been bad timing or someone who didn’t get it?

I mean, taking note of Kayla, as much as she means well, who is to say Claire’s closeness with her is based on not having much in the way of alternatives? Not to be a pessimist but, again, first friend we’ve met in a season and a half. So could it just be, since Kayla was called controlling, and Claire didn’t grow up in the most nurturing environment, she took the attention as affection? Perhaps Kayla meaning well? Hence why, even if Kayla didn’t know what the hell she was talking about, and paired her with people who weren’t good matches, she just went with it? If only just so that things wouldn’t be awkward in the room and Claire would feel a little less alone?