A new resident seemingly will act as some sort of villain for the show and alongside her introduction is that of what trans youth go through. Especially in terms of medical issues.

With both Isabel and Marcus over 40, naturally having a kid is difficult. Originally because the idea is that Isabel dedicating her years to her career is the problem. However, a low sperm count and other issues seems to be the real problem. One which hits Dr. Andrews hard since he decided to lay the blame thick on his wife. But now, there are a lot of thoughts going through his head. Some are planted by others, like the idea of adoption, what it means to lose a child, and things of that nature.

But, in the end, it seems, as usual, a patient illuminates our main cast and will likely influence a future decision. With Dr. Coyle gone comes Melendez inheriting Morgan. To say the least, and keep this recap proper, she is a mean girl but not of the dumb variety. She is quite qualified and honestly is in the running for however many positions the hospital does have in the future. However, as she is paired with Claire with a patient, it shows that she is in it to win it and the patients are just a step on the ladder to her ultimate goal. Which for now is just being hired but probably, just as Dr. Andrews seemed willing to say or do whatever was necessary to get Dr. Glassman’s job, he better watch out.

Leading to the necessary question of: Why is Morgan like this? Well, one can only hope that like Dr. Andrews, with time she either mellows out or her humanity gets shown. But, at least for Claire, there is some sense she isn’t alone in this battle. One in which, with Shaun having Dr. Glassman back him, and Jared solely having a job because of a lawsuit, makes Claire the only target of Morgan. So while Dr. Melendez can’t play clear favorites, with a warning and a compliment, Claire knows she isn’t alone. Though, also, it seemed she might have been processing the kindness of Dr. Melendez and reminding herself not to take it too personal.

As shown, when it comes to new situations, and Shaun dealing with cultures that are foreign to him, him being autistic means no sort of political correctness. Hence why when he meets Quinn, a trans girl, he decides to refer to her as a he quite often. Something which is quite a problem for Quinn, when her parents tried to suppress her identity, attempted suicide.

But, unlike with the situation when interacting with a Naja, Shaun takes the time to really try to understand Quinn. He asks questions about when she began to feel like a girl and though he is saying one inappropriate thing after another, when you combine what he says with how Quinn’s parents and grandmother feels, you get a full view of the difficulties trans kids have. Be it your parents not just tolerating you in the home, but accepting and allowing you to be in public. Then extended family and your community knowing and accepting you as you present yourself.

Thus leading to Shaun’s new friend Kenny. Like Lea, he is a bit of a weird one. He breaks into Shaun’s apartment, more than once, and asks to siphon his TV connection. Also, he helps Shaun break into the pool just to understand the feelings Quinn talks about. So it seems while Dr. Glassman may not be willing to just be friends, Shaun may have found someone to take up the time both Dr. Glassman and Lea once took.

Here is just hoping that Kenny, ultimately, won’t be a bad influence. 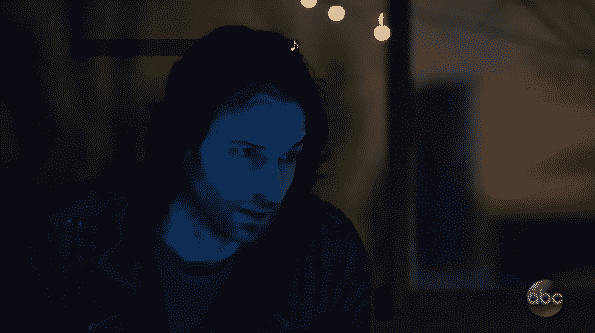 I kind of like the idea of Shaun exploring a mischievous side with Kenny. If not getting the normalcy of having a regular old guy friend. For, in my mind, Kenny is basically going to be what Lea was minus any sort of romantic entanglements. So, more than likely he is going to push Shaun’s limits, force him to get out more, and provide what may seem like a safe zone for Shaun to explore what it means to be him.

Because there are times I really do feel like Shaun has been on auto-pilot. Steve gave him this surgical kit and Dr. Glassman supported him through medical school, so here he is. But as he talked to Quinn and kind of seemed like his life was a lot of “Just Is” rather than him knowing and being able to explain himself, so comes the thought he may question if he really wants to be in medicine. Especially since, while he still cares about Dr. Glassman’s opinion, he isn’t ruled by it anymore.

Even with reading Janet Mock’s book on transitioning, there remains so many questions about Trans Identity, especially the medical aspect. Some of which I feel I could learn more out picking up I Am Jazz again. For while I have only seen the 1st season, and have been meaning to watch the ones which followed, one of the valuable things about that series is that it presents a non-dramatized version of what Quinn is going through. It goes into dealing with puberty, making medical decisions, and socializing as a cis girl vs. a trans girl and what that means.

And I know it is weird to hype another show while talking about another, but there is such a value in the spotlight we see in a lot of these episodes. Whether they are presenting people with autism who aren’t as high functioning or trans youth. But the problem is, for a lot of these topics, we won’t see any real follow-ups. We’re probably not going to see Shaun or Jared look more into how to treat trans patients for the next time they have one as a patient. However, on I Am Jazz, if you don’t wanna read Janet Mock’s book, there are multiple seasons to understand more and not just let this character be a blip but be shown as living, breathing, an unscripted person. Which I say taking note that the actress playing Quinn is trans and also seems to be, like Jazz, documenting her life, struggles, and just plain mundane activities. Check out Sophie Giannamore’s YouTube page here.

With Dr. Andrews and Melendez having long evolved, we haven’t had an absolute villain on the show. Which is something I’ve appreciated since, in medicine, the last thing any of these people need is a serious case of ego and the nonsense which comes with it. However, as residents, all vying for limited positions, having someone like Morgan around makes sense to be frank.

I don’t like her in the least bit, but I must admit that this show could use a consistent challenge from week to week (the next episode isn’t until the 26th, but you get what I mean). Though, with that said, I do hope she gets some depth added within her next two or three appearances. In total, according to Deadline, she is currently scheduled for just 5 and with there only being that many episodes left, counting this one, here is hoping the writers and Gubelmann make the most of this.

So About Claire’s Crush

The extended pause after Claire being complimented by Dr. Melendez was very telling. Not in such a way I expect the show to gear itself to use him as a mean to show a proper way to approach your co-workers about being intimate, but who knows? I don’t see either as being bold enough to make a move so I don’t think that will happen. However, being that Shaun picked up on that crush, I can fully imagine Morgan doing so and planning to use that to her advantage.

Considering how infrequent Dr. Andrews can be on this show, and us just seeing his wife for the 2nd time, or 3rd, it makes me wonder if this whole wanting kids thing won’t be made a big deal. After all, no one’s, outside of the hospital, personal life is consistently focused on besides Shaun. And even with his, we have cut out the flashbacks and pretty much his personal life is whoever lives next door and his complicated relationship with Dr. Glassman. So who knows if Dr. Andrews situation may ever get followed up on properly.

That alongside Claire trying to make sure Dr. Coyle pays for what he has done. There isn’t any mention of it at all. But, maybe Morgan might be the silver bullet to take him down? She used to work under him. Though, with bringing that up, I hope they don’t use that to soften her.