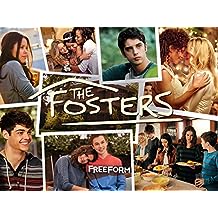 Get to know the girls of Girls United.

Trigger Warning(s): Various conversations about such things as cutting, rape and other issues.

Being that one of the most interesting aspects of the second half of the first season is the girls of Girls United, it is hard to not take interest in this webisode series. For one, with so much talk about the various foster homes Callie has been in, it is hard to not be interested in what actually goes on. Much less, fosters homes within themselves are mysterious places of which most don’t want to be in, and are among the many topics which socially don’t come up often. But, with The Fosters already having a full plate of things to talk about and go into, thankfully ABC Family gave the girls, which I can say since Cole isn’t in the webisodes, a time to shine.

When we first met everyone I used this heading, and since we are getting to know them better, consider this to be part 2. First off, we get to meet Michelle, who monitors the girls when Rita is gone, and though she is written with as much to say, or personality, as Rita, she seems alright. But, the real focus, of course, is the girls.

Kiara, one of the oldest in the home, and the one whose brother is in jail, presents herself as almost the big sister figure in the episode. I say this because, naturally things focus on Callie, and after us originally meeting Kiara, when she was Callie’s roommate, she sort of fade to the back. But, in the webisodes, she gets to, as well as the rest of the girls, get to reassert themselves in the absence of Cole. As for Kiara specifically, she and Callie talk after a would-be pregnancy test is found and questions get asked amongst the girls. With this topic brought up, Callie briefly brings up Liam, upon her virginity being questioned, and this leads to Kiara sharing her own experience of sexual assault which lead to an abortion and why she joined a gang.

As for Becka, we learn that she still is a cutter through Gabi and Callie doing laundry. What makes it worse though, is that when a knife goes missing, she blames Gabi. Leading to perhaps the big focus of the webisode, which is Girls United being more than a title. For, with Gabi having ran away, and everyone really only looking out for themselves, rather than each other, Michelle tries to remind the girls that united they are stronger than they were as individuals.

To me, being that Hayley Kiyoko is the most recognizable face of the new characters, it shouldn’t be too surprising the webisode, in terms of story, mostly focuses on her. You see, Gabi runs away and what is left behind is a stick saying that something is positive. The conclusion is jumped to that the stick is a pregnancy test, but instead we learn it is a home HIV test, and Gabi is seemingly positive.

For, as she notes in “Family Day,” like many girls in the program, she doesn’t come from the best home environment. Her dad is an OG of the Scorpion Kings, a notorious gang out in their area, and she herself was messing around with a wannabe thug. But, what Gabi wanted the most was her dad’s attention, so due to sharing a needle with her drug addicted, and HIV positive dad, now she may be infected.

Thus leading us to watching Kiyoko give quite a good performance to the point I hope what happens in the webisodes carry over to the main series. For, while I do find Cole’s story interesting, I do think the girls at Girls United have the type of story that, hopefully, gets a real spin off. For, really, what is this webisode but a test? I mean, to me, maybe ABC Family might consider a real show for this if it does well. After all, their Mondays are doing well with their exploration of social topics, so imagine what Girls Untied could be as a show? Plus, we know Callie isn’t going to be there for the rest of the series, and I would hate for them to lose all these girls due to so much else going on.

All 5, 5 minute, or less, episodes are available on the ABC Family YouTube page. The first episode is linked here.