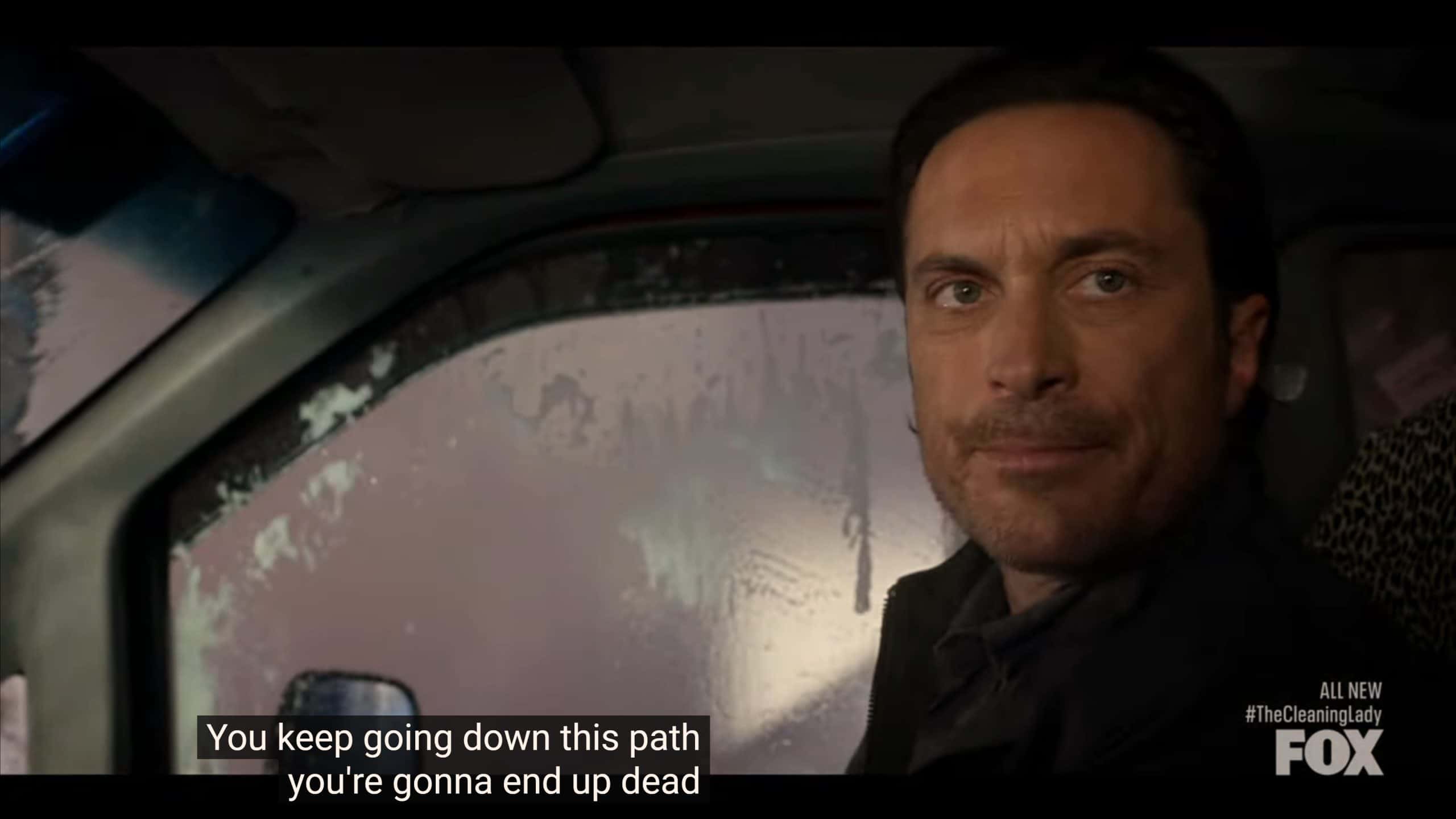 "Garrett making it clear that Thony is going down a dangerous path," The Cleaning Lady, "Trust," directed by Tawnia McKiernan, 2022, (FOX)

Arman finally focuses on rebuilding his reputation, as he hopes Nadia will come through and kill Robert before Robert gets the chance to kill him.

Thony is trying to put on a brave face since Luca made it to 6, and while he has fluid in his lungs, he is still alive. So, she becomes quite distraught when she heads to the clinic’s storage room for drugs, sees Arman, and he reveals his plan. Arman wanting to kill Robert, who still hasn’t given Luca’s drugs, is a major red flag. Especially since Robert can consistently get Luca his drugs. So, her immediate thought is that Arman shouldn’t kill Robert, leading to a mutual need to question, “Whose side are you on?”

This is a running question throughout the episode as Thony goes to Garret to stop Arman, talks to Nadia about it, and shows herself to only be a team player if it means getting what she wants. A fact that disturbs Nadia a bit, considering all the sacrifices Arman, and she, in extension, made to keep Luca alive, yet Thony won’t accept Robert having to go.

Then with Garret, it isn’t easy for him to let Arman be the trigger man and walk free. Russo even has to command him to look at the bigger picture, for with Robert involved with drug and human trafficking, what she wants is an arrest, not Garret playing judge, jury, and executioner like with Cortes. To dismantle his network means good cop work.

So, while Thony giving up Arman’s burner phone information does lead to a tempting moment for Garret, he ultimately doesn’t kill Arman. Instead, he pushes the idea as he takes Arman to some crypt for forgotten gangsters to get the truth and learn what happened to Maya straight from the horse’s mouthy, and that’s it. And with knowing Thony was involved and her conveniently not telling him that when begging him to stop Arman, Garret takes note.

Where Do Your Loyalties Lay? – Fiona, JD, Thony

It isn’t just Thony’s loyalties and priorities that are questioned, but Fiona’s as well. JD, newly single, quickly rebounds with Fiona to the point of them making out. But with a call from Thony, off Fiona runs.

Now, at first, this is understood for Luca is sickly, and Fiona being a doting aunt is accepted. What isn’t is Robert’s bodyguards, and when JD comes to visit, him feeling threatened. This leads him to push the idea that Jazz and Fiona getting dragged into Thony’s mess is unacceptable. So he pushed Fiona to decide who she will prioritize, for JD has already made his decision.

Robert lives thanks to good timing or bad if you are Nadia and Arman. Thony shows up just as Nadia has poisoned him, keeps him alive long enough for paramedics to show up, and seeing this leaves Nadia stunned.

But now the true challenge begins because Robert was already paranoid by default, and now he thinks he was poisoned? Oh, he is about to become far more erratic.

JD and Fiona Going For Another Round

The main thing we want from these two getting together is for Fiona to have her own life and storyline. Despite so much going on in her life, she has become Thony’s lackey again, and it’s a disservice. So even if it means trading being Thony’s lackey to JD’s girlfriend, at the very least, you see the potential for progress.

We can resolve her undocumented storyline, maybe Chris’ too, see her run her business more, and get to be Fiona De La Rosa rather than Thony’s babysitter, confidant, and whatever else Thony needs her to be at any time.

I’m still of the belief Robert may not make it to season 3, but I’m not against being wrong. However, with a murder attempt, if he is going down, I don’t think he’ll be alone. Now, will that mean more than his bodyguard dying? Who knows? Right now, the only characters who seem ripe for being killed off are JD and Chris, but considering how fast and loose people got killed off this season, we could be in for a surprise.

Arman Trying To Rebuild His Reputation

I’m trying to understand why it took Arman this long to try to rebuild his reputation. Especially as a solo act and not as a lackey under Robert’s umbrella. But, what matters is he is making an effort to re-establish himself, and while he formerly talked about getting out, and one last score, clearly, he is meant to live and die in this life. Which, while it is a long shot to hope for more background on his path to crime, maybe one day we may get it. Or at least see his parents when something goes wrong.

Thony Showing Her Loyalty Is To Luca, And No One Else

You have to understand that Thony is a mother to a sickly child, so damn anyone who would complicate her taking care of her boy. But the fact she is pissing off many who kept him alive to this point is entertaining. Especially if Luca is a potential character on the chopping block. For imagine, a Thony cut loose from Luca. A mother grieving, who blew up her past life and surely can’t just be a cleaning lady like Fiona, and that’s it.

Considering Robert’s investment, Garret expecting her to be a CI, and maybe Thony having her own ambitions, losing Luca may not only be a turning point but potentially necessary for this show to start a noteworthy new chapter.

Expecting Nadia To Be More Torn About Killing Robert

Here is my thing: Nadia is ride or die and has been exposed to Hayak, Arman, and Robert’s lifestyle, but she hasn’t killed anyone thus far, right? So the ease of it for her, the lack of bartering, no need to reflect on who she is killing, seems odd to me.

But that partly stems from not getting a full debrief on her and Robert’s relationship. She says she was scared of him at one time, hence the end of their relationship. Yet, considering what her husband does, and is involved in, what makes Robert scarier? What was that final straw that led to her going from Robert to Arman? Heck, all things considered, this Robert thing really pushes the need to know Nadia’s backstory, not in occasional anecdotes but in a flashback.

Give this woman her dues.

The Cleaning Lady: Season 2/ Episode 10 – Recap/ Review (with Spoilers)
Overall
“The Cleaning Lady” has us going back and forth between loving its direction to thinking it has immense wasted potential, and in the season finale, it seems we will get to see which side the show will land on after a quality penultimate episode.
Community Rating0 Votes
0
Highlights
Thony Showing Her Loyalty Is To Luca, And No One Else
Arman Trying To Rebuild His Reputation
Robert’s Paranoia Only Growing More and More
JD and Fiona Going For Another Round
Disputable
Expecting Nadia To Be More Torn About Killing Robert
83
Subscribe to our mailing list