The Chi: Season 5/ Episode 5 “We Don’t Have To Take Our Clothes Off” – Recap/ Review (with Spoilers) 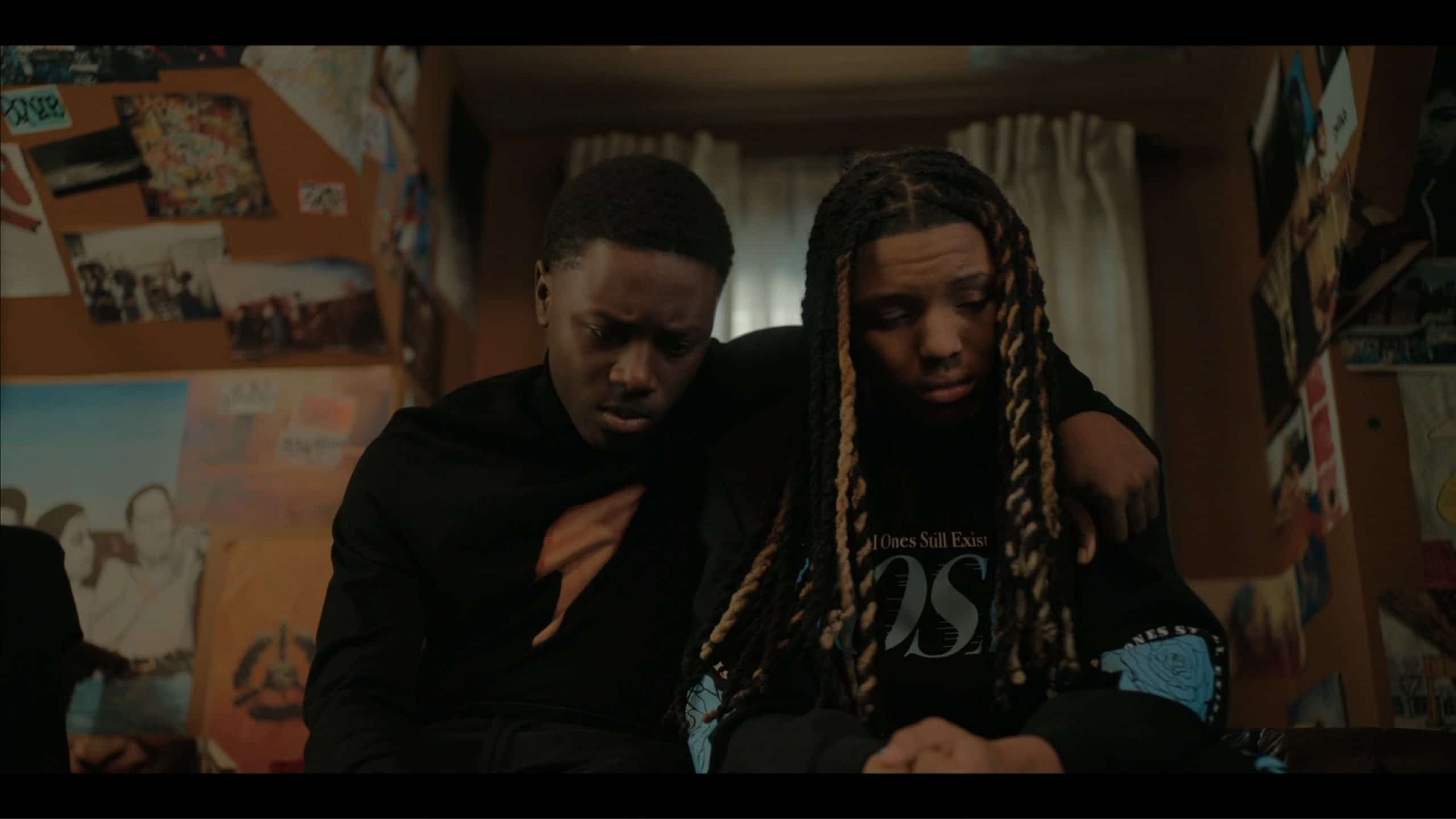 In “We Don’t Have To Take Our Clothes Off,” we’re reminded that nearly every character is about community at the end of the day. It’s just some with more exploitative intentions.

I Can Keep A Secret, But Won’t Be One – Fatima, Victor

Victor continues to entertain Fatima, even with him having a very public, cis, and hetero relationship. This leads to Fatima questioning Victor’s intentions and what he is? He responds that trans women are women, and he likes women, which is respected. However, while Fatima is hip to Victor’s publicity relationship and seems to like him enough to kiss him, she doesn’t want to be his secret.

This Is a Lot To Deal With At Once – Jake, Jemma, Marcus, Bakari, Shaad, Victor, Papa, Tracy, Roselyn, Otis, Quentin

With Jemma being pregnant and even presenting the idea of an abortion, while Jake doesn’t have a breakdown, he does talk to everyone he can that may co-sign his feelings on keeping it. But, from what it appears, no one is as sure of keeping the baby as him. Jemma might, since her dad is pro-abortion, but whether she really wants the child or a rebellious impulse is pushing her to say she’ll keep the baby is hard to say.

But, Jemma being pregnant isn’t the only thing Jake has to have on his mind. For after Bakari tries to rob Smokeys, Shaad gets involved, and after learning Bakari is homeless, he takes him in before talking to Victor or Jake. This leads to some headaches from them both, but it seems to be good for Bakari. He has some stability, Papa visits and tries to guide him on what his next move should be, and there is some level of peace.

The same can’t be said for Tracy. With packages being stolen, she fears this will lead to people thinking community policing is failing, and it is time to bring back the cops. Roselyn is sort of on board with her about this issue, at least until Quentin and Otis handle the situation, which only leads to Q getting 20% off whatever the thieves make and Otis having them regularly donate to ROCK. As you can imagine, this doesn’t solve Tracy’s issue but seems like a decent enough resolution for Roselyn.

While Simone still comes with a learning curve, Kevin is catching up. He gets that she is weird, but unlike his past experiences with things that are foreign, Kevin is invited to learn rather than chastised for not knowing. So with learning Simone is into cosplay, Kevin dabs his toe into it, gets himself an outfit, makes up a hero, and the two have fun at a ROCK party and even win a costume contest.

As for Kiesha and Emmett? They’re basically playing house without titles. Kiesha and Emmett hang out with no kids around, Kiesha invites herself to Emmett’s card game, and all the guys love her being there – even when she calls out their flawed takes, and Kiesha just comes off like the perfect partner for Emmett. Which is why the two end up kissing and having sex.

It isn’t common to get redemption stories for characters like Bakari. He killed major characters, threatened others, and yet, he is given the kind of grace kids like him, characters like him, often don’t get. Rather, him being put in jail or killed is what happens, and because of what he has done, you write it off as karma and move on.

However, “The Chi” wants to change the narrative. It wants to remind you some people aren’t villains or evil, it is just they lack societal niceties. Thus, they do what they can to obtain them. And since rehabilitation is seen as expensive and to many a waste, they lock people like Bakari away. They force them into prison labor, and with having a record, set them up to head back to prison for what other options do they have to get a routine, healthcare, and a roof over their head? Because a good portion of jobs that hire people with records surely isn’t going to allow him to live a comfortable life.

While there is a need to remember Tiff could potentially blow all this up, there is hope that with her and Rob going steady and strong, so she’ll just give her blessing, and this won’t ruin things between her Emmett, and Kiesha. After all, the work Emmett and Tiff have been doing is incomplete, co-parenting wise, and it would be horrible to take a step back.

Then with Tiff and Kiesha, considering this season has tried to put female friendships to the forefront, it would suck if Tiff negated that Kiesha had a whole thing with Emmett. Never mind that Emmett was potentially her first love, possibly like Tiff, and that Kiesha is simply more compatible with Emmett than Tiff ever was. At least if you consider Tiff and Emmett’s relationship seemingly didn’t have any sort of friendship built in.

Are They Going To Play Maisha and Papa Like This?

As someone who grew up chubby, it hurts me to my heart that the two characters who aren’t your typical look for series regulars barely have a storyline. Papa has been diminished to being a joke of a character who is stuck in his inability to deliver a proper apology. Then, on top of that, as much as we love what could be done with his friendship to Bakari, it keeps Papa where he has often been for the entirety of “The Chi” as someone’s support system. That is as opposed to really letting him shine and, like everyone else, Jake for example, being able to stumble and grow and show improve in a genuine way.

Then with Maisha, let’s be frank here. Like Papa, Maisha seems like one of those characters who is constantly stifled and given short moments in the sun. But what makes Maisha’s situation especially frustrating is that you can easily and quickly find actors who are Papa’s size in animation and live-action who are Black. Actors/characters who aren’t strictly funny. The Maisha types though, we don’t see the same diversity. We don’t get the highly intelligent around the way girl who is also a big girl too.

Nine times out of ten, we don’t see actors, especially young actors, who look like these two. They got the build of Emmett, Jake, or Kevin. They are young women who look like Tiff, Simone, or Kiesha, and it isn’t until they are Nina and Tracy’s age that they are no longer outliers. Hence why a part of me is so mad, especially for Maisha, because her journey from having a crush on Kevin in season 1 to now? It feels like she should be so much further and should like Emmett got to have an individual storyline connected to everyone, Maisha should have the same. Rather than being paired with people and getting absorbed into their mess and crafting ways to further the other person’s story for nearly every scene.

Victor and Fatima are complicated. In one aspect of their existence, you have to appreciate despite what led to Imani’s departure, the show has remained committed to showcasing trans women on an established show and give them full lives outside their scene partner. But, it’s as Fatima said, while she can keep a secret, she doesn’t want to be one, and that’s pretty much where this storyline is going.

Which leads to the question of, when Otis and others catch on, how bad could this potentially get? Will this lead to Victor reaffirming his love for all women, no matter what their gender was assigned at birth? Can that moment negate what Q and Otis may potentially say or do? It’s hard to say since “The Chi” can get into dark territory when it wants to. Lest we forget, the show began with a murder of a child and many experiencing trauma.

The drama going on with ROCK and Tracy is not the strongest storyline on “The Chi.” Why? Mainly because the majority of its members are characters who could have been written off but weren’t. Tracy has had multiple opportunities to exit, but they kept finding new ways to revitalize the character. Otis could have been killed off, but instead, he was allowed to live. Roselyn is tied deeply to Otis, so if his storyline isn’t doing well, neither is hers. Then when it comes to Quentin? Honestly, he has not only been gone for a long time, but the luster of his return has left.

Yes, him roughing someone half his age up was notable, but it didn’t renew him. He remains the shadow money figure whose use hasn’t allowed him to be the one who only shows up when s*** gets real or evolve to someone you feel like you know personally. Overall, he is just being mismanaged.

The Chi: Season 5/ Episode 5 “We Don’t Have To Take Our Clothes Off” – Recap/ Review (with Spoilers)
Overall
While you have to appreciate the sense of community being shown in “We Don’t Have To Take Our Clothes Off,” there is also a reminder that not all characters are treated equally, and some are being failed.
Highlights
Emmett and Kiesha
Bakari’s Relationships
Disputable
Tracy’s Plight
Fatima and Victor
Are They Going To Play Maisha and Papa Like This?
81
Follow Wherever I Look on Twitter and Instagram, Like us on Facebook, and Subscribe to the YouTube Channel.