Wherever I Look
Recaps, Reviews, and So Much More
Home TV Series The Chi: Season 3 Episode 8 “Frunchroom” – Recap/ Review with Spoilers
TV Series

In an episode focused on Kiesha and her household, we learn more about certain characters than ever before.

Upon Kiesha’s return home, she immediately locks herself in her room, barricades the door, has scissors in hand, and you expect the worst. Luckily, all that we see is her spend three days to herself, staring at a wall, occasionally going into the bathroom to take note of the bruises and external damage done. All the while, trying to reconfigure her mind to handle the traumatic experience she had.

Which, experiencing from the outside, worries Dre. However, between the issue of Nina trying to kick her out before mixed with the constant reminder that Kiesha is her daughter, and the kids are not Dre’s, it’s hard for Dre to be anything but immobilized. Add in her inviting one of Kiesha’s friends over and that blowing up, and it leaves Dre with all these good intentions but a partner who is too stuck in her own trauma to be proactive.

A Reminder of What Kiesha Left Behind – Emmett, Kiesha, Nina, Dre, Kevin

While Kiesha’s girlfriend coming over was a grand mistake, luckily, when Emmett comes over, he provides the relief Kiesha needs. Maybe in the form of realizing she can make good decisions, like not dating Emmett, as she hears he cheated on Tiffany? Perhaps it is because he knows more sides to her than most, so he isn’t locked into seeing her as innocent, sexy, or any of that. He has seen Kiesha at her worst, and best, and not because he stumbled upon her but was invited in. Thus reminding you of the intimacy they have. And with a reminder that she can laugh and smile, while it doesn’t change what happened or her losing her scholarship, her appetite comes back, and she is a bit more willing to be social. However, as Nina continues to play it safe, let Kiesha take her time and try not to bother her, Kevin finds the situation insufferable. Specifically, Nina wanting to keep him close, and not forcing upon Kiesha therapy and all that he had to go through after dealing with Coogie’s death.

Thus, Kevin blows up. He blames Kiesha for being kidnapped and reveals Nina and Dre started to pack up her room. And in the back and forth, which includes Kiesha asking what took them so long to find her, it seems a lot of the progress that was made by Emmett is washed away. Leaving those who came over, including Emmett and Kevin’s friends, feeling awkward and like it would be a good time to leave.

But, when it comes to Jada, she doesn’t shy away from the situation. For despite us mostly seeing her as a nurse, she is also educated in social work, and while Nina isn’t ready to open up what happened to her and possibly relate to her daughter, Jada is. She connects with Kiesha by revealing a family member assaulted her and the consistent triggering of her trauma since every family function and holiday, they were there.

This leads to Kiesha putting her guard back down and asking about getting back to normal and, in the nicest way possible, Jada lets her know her old life is gone. There is a need to establish a new normal and take control of the narrative of what happened and how she plans to deal with it.

That conversation helps, but only covers one part of Kiesha’s trauma. The other part deals with her killing Omari and seeing his face when she closes her eyes. This is where Ronnie comes in, after he was invited over, for now, they have trauma bonded. He saved her physically, and she saved him mentally. For the way he sees it, she presented a light for him at the end of a long road. 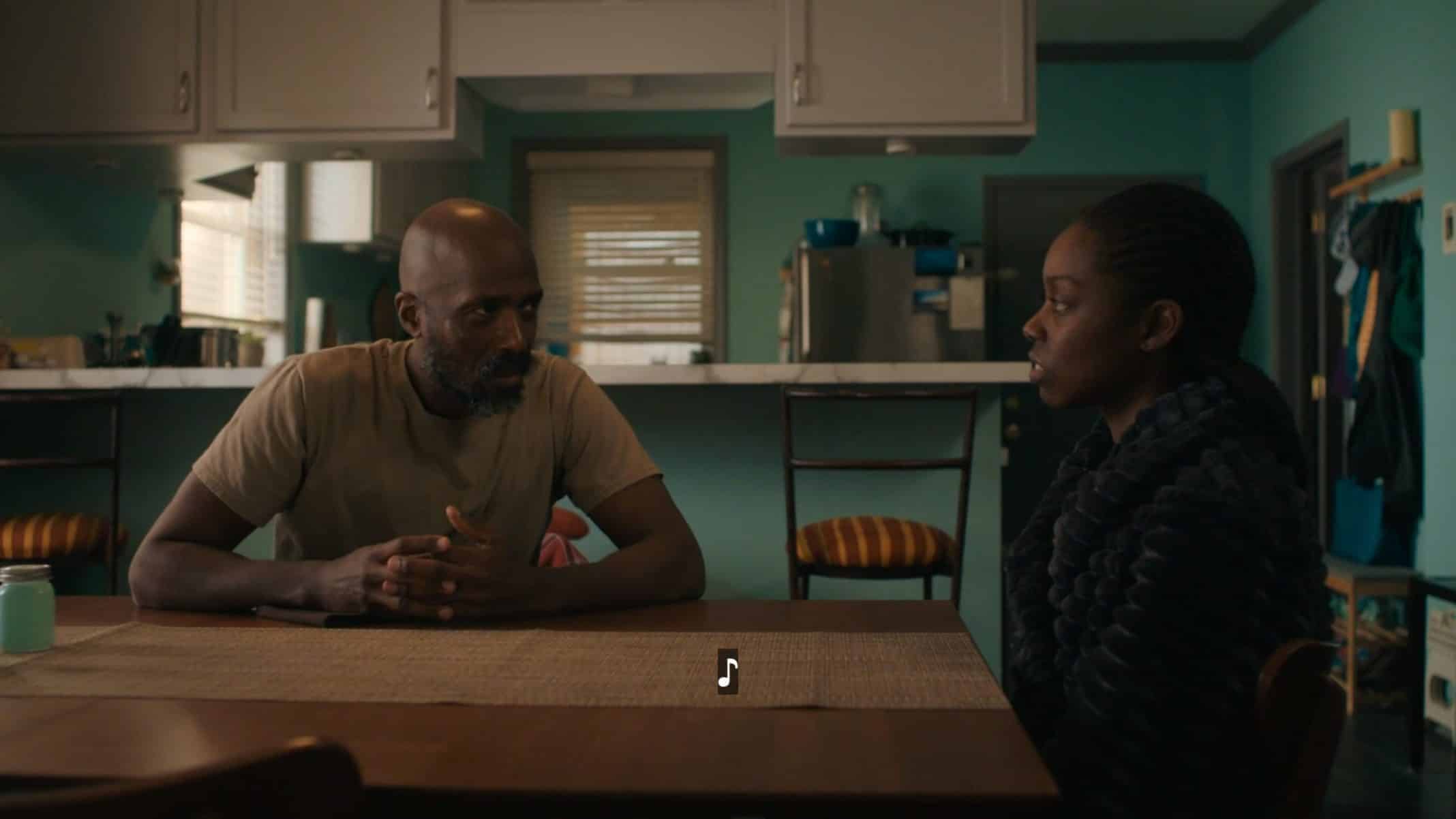 However, what he also provides is an idea of how you deal with the guilt from killing someone? For while they have different circumstances, they are both haunted just the same. And, in the end, all Ronnie can advise is to not drown out the thoughts, feelings, and visions with brown liquor. Advice that is well taken and does lead to some destruction, specifically Kiesha burning all her sexy and cute clothes. But with her voluntarily going to therapy after that, perhaps burning away who she was is allowing herself to become who she wants to be now?

How Kiesha & Her PTSD Was Handled

Ever since watching the wine down, featuring Amanda Seales, the idea of acting for the back of the room, or auditorium, has been a thought in my mind. Especially when it comes to trauma and add in I May Destroy You and how that show handles trauma, it makes you think about the difference of how Black women may get to express it versus white women. Like for Kiesha, only Nina advocates for Kiesha being allowed to wallow and come forward when she is ready. Dre is ready to push her to therapy asap. Kevin, being that he was forced to go, he is ready for her to be sent, lashes out when he is inconvenienced and even snaps on Nina a few times.

All the while, yes, Kiesha does have a moment of tearing down her awards and burning her clothes, but there is also a lot of silence. You can see her taking advantage of trying to make the world still so she can catch up all the time she lost because she lost control. Never mind her mother advocating for her to possibly have that privilege.

And though it’s unfortunate this was what it took to bring a female character to the forefront, a part of me does appreciate how Kiesha can potentially tell this story. Also, I like how it shifts the dynamics of The Chi, which has largely been focused on male trauma, or the trauma women go through trying to raise men. For now, it is Kiesha who is the focus when it comes to her relationship with Emmett. It is her wellbeing that matters, her laughing and people trying to relate to her, and show their value, than the other way around.

I’d even throw Ronnie in there for he has mostly existed in the same community, but with his own storyline. So for him to speak with Kiesha and talk about being at the end of a dark road, it almost feels like a passing of the torch moment. One that hopefully doesn’t mean Kiesha is about to go through absolute hell in her recovery, but considering what she has been through, it is understandable if that happens.

Jada & Nina Opening Up About Their Past

As noted above, largely, this show has operated on what the women can do for the men, and the only time the women were focused on is when they felt like they failed the men in their life. And even with Jada, who has had sporadic moments outside of Emmett’s shadow, it wasn’t until this season she really became an individual. Yes, with a lackluster romance, but with us seeing her at work and this sudden friendship with Dre, she is less defined as Emmett’s mom more and more. 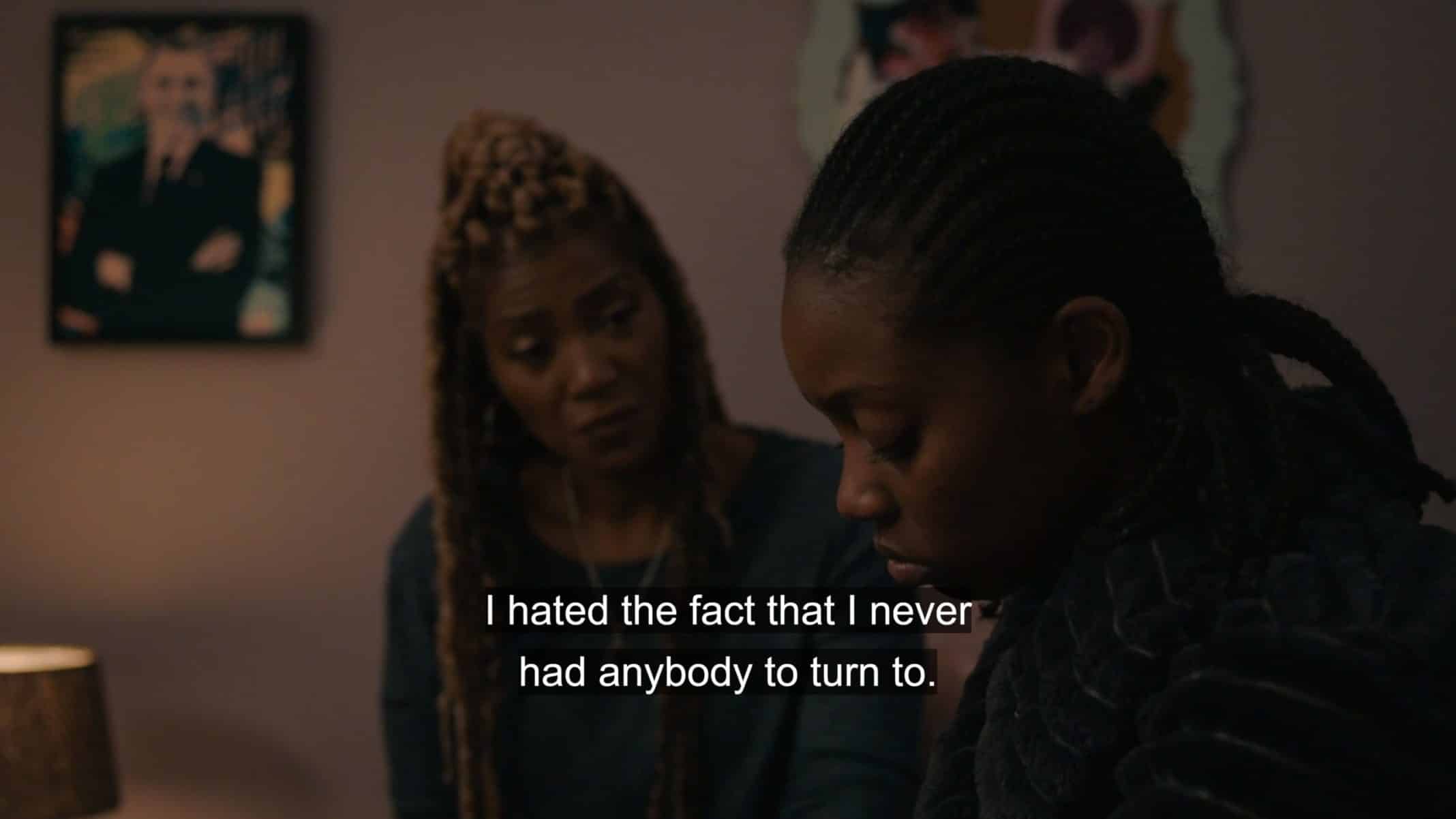 Jada: I hated the fact that I never had anybody to turn to.

Heck, add in her talking about her trauma, and it reminds you how she was a whole person before Emmett. Something that can also be said about Nina for she, far less than Jada, hasn’t really gotten treated as much of an individual. Even her partnership, now marriage, to Dre never felt like a notable or real thing. Her being queer was treated as nothing worth noting, even with her relationship to Kiesha and Kevin’s father. So for her to finally crack open and us getting to understand why she seems so anxious, to the point of sounding out of breath, it draws you in. I’d even say, for the first time ever, or in a long time, it makes you want to know Nina more intimately.

I’m not condoning how Kevin acted, but at the same time, it was expected. As said many times when it comes to Black women, they often aren’t allowed the benefits, for lack of a better term, of being a victim. They aren’t given the time to heal, empathy, or even space in some cases. That allowance is short, if not non-existent, and as soon as their recovery makes someone uncomfortable or disrupts their life, they are pushed to shut up and move on.

So with Kevin, you have to appreciate how he was willing to get shot to find who kidnapped Kiesha, flipped out on his girlfriend for telling his business, yet also is one of the first to openly blame his sister for what happened. It shows you a less than ideal version of what happens after a traumatic event and how the people you are close to can respond.

Let’s be real, Emmett could use some rebranding. Him being a hustler, whose ventures often are dependent on the other person, as well as a hoe, it’s well established, but there is a need for change. So, in our mind, Kiesha’s relationship is key. For it is in that relationship, you get the idea Emmett’s value of women goes beyond what he can use them for. It’s with Kiesha that Emmett doesn’t seem like a snake salesman but someone who made mistakes and is having a hard time recovering from them.

And as The Chi shifts from being male-focused to giving women some of the spotlight, here is hoping he becomes a supporting role in Kiesha’s budding story.

Ronnie Has Reached The End Of A Dark Road

I don’t know what’s next for Ronnie, but I would love to see his reputation recover, and him begin to be what his grandmother expected. We understand alcoholism is a slippery slope and pair that with PTSD, and Ronnie has all the right to be a mess. However, like Emmett, he has been stuck in a pattern, and it feels like a good time to break it. So between getting a steady job, his own place, maybe meeting someone nice, one can only hope the light Kiesha is akin to in his life, it means the dark path he was on is over.

Ronnie Has Reached The End Of A Dark Road - 85%

Episode 8, "Frunchroom" is the beginning of not just Kiesha's healing process but perhaps a much-needed shift for The Chi, which was long overdue.