When does a vice become a problem? Is domestic violence something to be less serious when a woman hurts a man? How messed up is Nekeisha’s life really? That’s what gets covered in episode 8 “Intervention.”

We Have To Talk About Nekeisha: Nekeisha, Bobby, Cynthia, Maxine

Nekeisha gives Bobby a Black eye. Originally we are told it was because of her drinking, meaning she is a potential alcoholic. However, we learn the reason Nekeisha punched him in his eye was because he poured out her bottles – while she was sober! With that, all the sympathy for Bobby is gone and the domestic violence turns from a joke/ concern to something a few feel he deserves.

Especially after Nekeisha lays out her life. Be it the multiple drug addicts in her family, the amount of people who died, and then her having to take care of her nephew. All things considered, it isn’t a surprise to anyone she drinks once a day to take the edge off.

However, as usual, Maxine uses her degree to analyze the person and situation. Leading her to talk about meditation helping her with her problems and she gets Nekeisha to try it. It doesn’t work well, but it’s better than drowning, or rather suppressing, her feelings with alcohol right?

I feel like a broken record at this point. Considering how, in the first or second season, Maxine addressed Cynthia dealing with depressing or suppressing her emotions, this would have been the perfect episode to revisit that. They could have even made it a joke about how speaking her mind leaves her stress free, but still worries others. If only because they never know what may come out of her mouth. ‘

But, outside of Joe, we don’t get a whole lot of follow-ups to old stories. Hell, the whole Morris thing isn’t even a blip on the radar. So I guess alongside Maxine and Jerrod getting engaged, the young trans person he met, and a slew of other storylines, we can just throw that one into the forgotten pile.

Actually, It’s Maxine Who Has The Problem: Nekeisha, Jerrod, Maxine

While everyone else is understanding about what Nekeisha is going through, Maxine digs her heels in. As noted, she talks about meditation and all that but, come to find out, she is taking Xanax. However, being that it is prescribed by a doctor, she takes exception to it being compared to alcohol abuse.

So, to prove a point, she lets Nekeisha hold her Xanax for a night. Which leads to Jerrod going crazy and taking a few puffs of weed. For when your girlfriend is freaking out about genocides at 3 in the morning, what else are you going to do? Leaving us with Jerrod Carmichael basically saying: 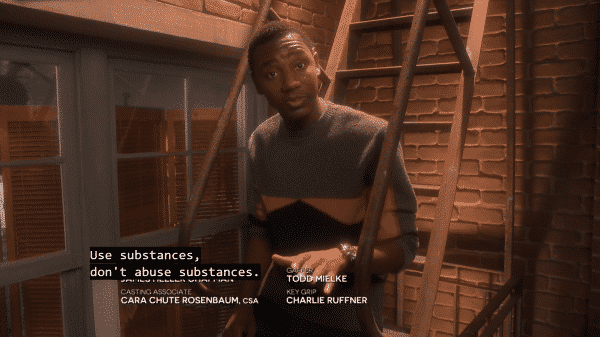 Do you ever feel that the topic’s seriousness sort of gets lost in the joke? Like they are, at this point, just taking broad strokes and not really honing in one something and finding the comedy in a serious issue? I do. I honestly feel like they are just trying to hit targets and as long as it is on the board, it is a win. No need for a bullseye for who are they competing against? They are setting precedents just bringing these subjects up on network TV. Nevermind it is a Black family talking about them.

Yet, in that lies the issue. The Carmichael Show is slowly devolving. It is running about, high off of praise, and you almost get this vibe that the praise went to the writers head. Now, they don’t have that hunger to top themselves anymore. It is just about what buttons can we push to hopefully get a rise out of someone enough for an article to go viral? So maybe make it so we get free advertisement…

Which sucks cause, it is one thing if a show, movie, book, or whatever is provocative and really has something to say. But to do so just to gain some sort of recognition for saying something? It is like some cousin to mansplaining in a way. It isn’t like any of these topics haven’t been said before, joked about, and perhaps gone in-depth better. So, since I guess the luster is wearing off now, I’m trying to figure out what is the hype?