The show ends with the topic dealing with how money affects the power dynamics of a relationship and Maxine revealing she has a $1.5 million inheritance. What a lackluster way to end a show.

You know whenever Bobby meets a girl that is into him, sexually or otherwise, he tries to make it a big deal. In episode 12, he tried to make it a big deal he slept with an Asian woman – one we don’t get to physically see. In the case of the series finale, we meet Janet (Margaret Avery). A woman who is up there in age and of course this brings about complicated feelings for Cynthia. She begins to wonder if her babying Bobby all this time has developed a fetish and she is just so distraught. Mostly over the fact she won’t get kids out of Janet more than anything else.

While it is always nice to see Margaret Avery, I’m mad she got the Nekeisha treatment this episode. She literally pops up to say hi and is gone. From there, Bobby has to bolster the legitimacy of their relationship. Which of course I’m going to be critical of because part of the argument here is how weirdly it is accepted for an older man to be with a younger girl but not vice versa. Something which could have been used to setup some R. Kelly jokes and show how similar or different it is with an older woman. 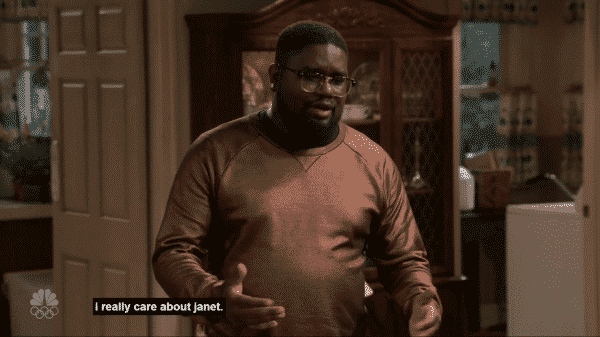 Plus, as Avery showed on Being Mary Jane, we could have gotten to see an older woman, much less older black woman, still spry and more than a sexless grandma. Something I would have loved to see since ageism we already know is a problem in Hollywood. However, like the pay gap, it gets worse the darker you get. For I don’t know of or see someone being the Ryan Murphy to Jessica Lange among Black folk. It would be nice if someone would help keep these legends on screen, but it seems they can book guest spots and that’s about it. [note]I realize some may be just fine with that but I doubt all are.[/note]

With learning Janet is making a lot of money, everyone forgives Bobby for dating someone older than his mother. However, that is followed by some shaming by Jerrod and the term gold digger being applied. That alongside the mention of power dynamics because, in his opinion, whoever makes the most money has the power. Something Maxine finds funny for while she is a social worker, she also has $1.5 million coming to her when a family member dies.

Something that, once the Carmichael clan learns this information, changes everything. Jerrod starts becoming very ignorant with the way he spends money, Cynthia acts nice toward Maxine and she is just left perplexed. To the point that when Jerrod asks for a postnuptial agreement, she feels kind of odd about it but agrees. If just to end the madness.

I know this is not how they planned to end the series. However, a part of me feels that the storyline of episode 12 would have made a better finale than this. If only because it brought about some sense of ending. For even if you just look at this episode from a season finale point of view, it just lacks luster. Now, of course, you’d have to rewrite some stuff in terms of the marriage around, but that would have led to a new topic: Prenups.

But overall I think I bought too much into the hype when it came to this show. Which, as perhaps can be seen over the course of this season, has had me nit picking and perhaps seeming like a hater. Something that was never my intentions but there is the constant worry that when something done by Black people, or people of color, doesn’t hit it out of the park, it sets everyone back. So with NBC making it seem this didn’t meet expectations, and making that public, who knows how this may affect similarly pitched programming.

Either way, this show did help set up Tiffany Haddish and Lil Rel for bigger things. So, here is to their bright futures.