The stigma of stripping is the topic of “Maxine’s Sister” and while there isn’t any interesting insight, we do at least get to meet more members of Maxine’s family.

Jerrod’s family gets to finally meet Casey’s sister and Bobby reveals she is a stripper. Something Maxine refuses to believe but Casey admits she is Caramel Diva [note]Which seems like such a strange name for someone who should be White Chocolate[/note]. This messes with Maxine and leads to many calling her out, especially Jerrod, since she is so pro-women owning their bodies and all that, but not if her sister is a stripper!

Thus leading to some layers being revealed in Maxine and Casey’s relationship. Like how Casey sees Maxine as a 2nd mom since their actual parents were too into themselves to care. That and Casey believing that she isn’t as close to Maxine as Maxine likes to believe. Mostly because of how judgey Maxine is which leads Cynthia and Joe to agree wholeheartedly.

So, to try to be more understanding, Maxine says she’ll strip. She’ll strip on amateur night. This leads Jerrod, who was pro-Casey doing what she needs, especially since it makes her over $90K a year, to now be against stripping. If only because it would cost guys just $15 to see his girlfriend naked. After who knows how much he spent for the privilege.

It’s not that I expect from a half hour show, with commercials, to really take a topic and dig deep. However, it would be nice if it didn’t hit points that seem long hit already. And maybe it is just with me being aware of Tumblr and SJW media that none of this is new to me. Maybe someone out there may not have thought of the commentary Jerrod Carmichael has come up with, but I feel like those people would be far and few between. Surely the hypocrisy isn’t new to anyone, right?

But, at the very least, we can say there was some story consistency here since there is mention of how terrible Maxine and Casey’s parents were. We don’t build off of that much, but this isn’t a story driven show so what are you going to do? 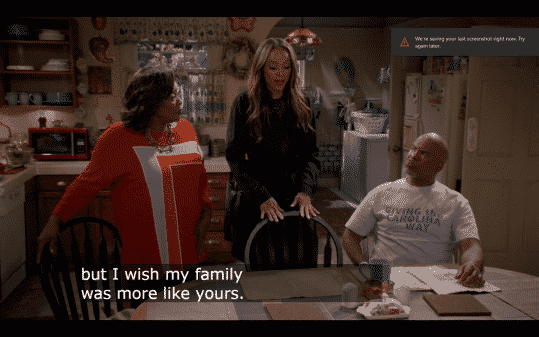 Though Maxine still isn’t married into the family, she has been with Jerrod for years now so she has come to the point of being comfortable with them. And while they find Maxine a bit judgmental, bougie, and Cynthia probably doesn’t like her due to what Joe’s mother put her through, they treat her like she is their daughter. So when she comes to them specifically for advice about her sister, they give it to her straight.

In their opinion, the lack of financial struggle is what allowed those two to be distant. They didn’t have to share a room or space, so what would force them to deal with one another? Get over their issues? In Joe’s mind, “Nothing unites a family more than financial struggle.” So with no reason to rely on one another, that is why there can be a 7-month gap between Maxine and Casey talking to one another. For the lack of interdependency means they have no outside forces pushing them together.

But, in the long run, the two women reconcile. Casey seemingly won’t stop stripping, but with enough money to go to Hawaii with Jerrod, surely Maxine will appreciate the opportunities stripping gives. Just like Bobby probably appreciates how amateur night allowed him to get some form of revenge on Jerrod [note]We are told Jerrod stole Bobby’s first girlfriend so Bobby getting to see Jerrod’s fiancée seems like some twisted kind of revenge. Though I’m surprised Maxine didn’t notice him. But, then again, with the way the lights are, who knows if she saw anyone but those right up on the stage. Never mind the fact we don’t know if Maxine went beyond revealing her underwear.[/note].

Moments like what Maxine has with Joe and Cynthia are one of the few highlights of the show for me. For I’m long past the luster of what gives this show notoriety. Since none of the topics are really talked about in a way which makes Carmichael seem like he is on the level of Pryor, Carlin, or even Chappelle. However, one thing I have always found done well with The Carmichael Show is when it isn’t trying to be funny or isn’t trying to necessarily dig into some big social topic.

What makes The Carmichael Show, for me, is when it digs deep into the characters pain. Like just the fact that Maxine, even with how Cynthia and Joe talk to and around her, she loves that at least they are direct. And, even if she does get on her nerves, Cynthia still cares about Maxine. Even to the point when she talks about doing the amateur night thing, she says she’ll still have a place at her table thereafter – just after a shower.

With that, you get the sort of ideal way that I wished this show was handled. Like more of a Black comedy, as in something darker I guess, if not a dramedy, than how it is currently done. For while other productions have shown these people are funny, comedy that doesn’t come from some sort of pain or awkwardness, just seems like words on a page in their performances. Which is probably why I have barely found this season, at least, funny.