The Book of Boba Fett: Season 1/ Episode 2 “The Tribes of Tatooine” – Recap/ Review (with Spoilers) In the latest episode, Jabba’s cousins arrive to lay claim to his territories and we get to see how Boba Fett won over the Tusken people.

So You Call Yourself The Daimyo? – Boba, Garsa, Mok Shaiz

With an attempted assassination on his life handled, and the assassin pointing the finger at the Mayor, Boba visits them, and they are utterly coy about the situation. In fact, they pay a bounty to Boba since the assassin was working out of their legal jurisdiction.

This isn’t seen as comical since Boba Fett wants the respect owed a Daimyo. But, it seems Mok Shaiz, the Mayor, isn’t going to push their luck too much when it comes to Boba Fett. However, they do redirect his attention to Garsa’s Sanctuary since likely he’ll get more information on this attempt on his life than in their office.

Thus leaving you to wonder, was it Mok Shaiz or his rep that

The Twins From Hal Hutta –  Boba, The Twins. Fennec

Unfortunately, no sooner than Boba Fett arriving at Garsa’s Sanctuary comes the Twins from Nal Hutta, Jabba’s cousins, arriving and am making claims on their cousin’s territories. Boba Fett, and his crew, face off against their and their entourage, but while the female twin seems fine with violence, the male twin sees it as bad for business, so they put a pin in the situation. One that Fennec makes clear can’t be handled with murderous violence without permission.

As he is in his healing pod, Boba Fett finds himself back in the past, earning the respect of the Tusken people. How? Well, by destroying a train-sized speedster that has been a menace to the tribe he has been captured by for a while. This he treats as fairly simple and begins with him beating up some thugs to get normally sized speeders, teaching the Tuskens how to ride, and then having them shut down the ship.

By doing this, Boba Fett get them access to off-world weaponry, which they have long coveted, and builds them up in ways that could allow them to defend themselves and make money. For while formidable, Tuskens are nomads whose main advantage is knowing the Dune Sea. But, outside of that? They lack varied resources and add in the various tribes are disconnected? Their potential is untapped.

However, with making one group, who uses the land of the Tuskens to transport spices from the Kessel slave mines, pay a toll? There is a chance Boba Fett may have dramatically altered the trajectory of not just the tribe who captured him but the Tusken people of Tatooine as a whole.

Boba Fett’s Past With The Tuskens

I don’t know about you, but I would be perfectly fine with this show mainly focusing on how Boba Fett eventually met up with The Mandalorian. Everything that happened between him and the Tuskens was far more interesting than him dealing with the politics of being a Daimyo and the posturing of claiming to be the new lord of Jabba’s former vassals. For whether it was the battle scenes with that train-sized speedster, him doing close-quarters combat, or seeing the initiation into their tribe, that beat nearly everything we see in his present day. 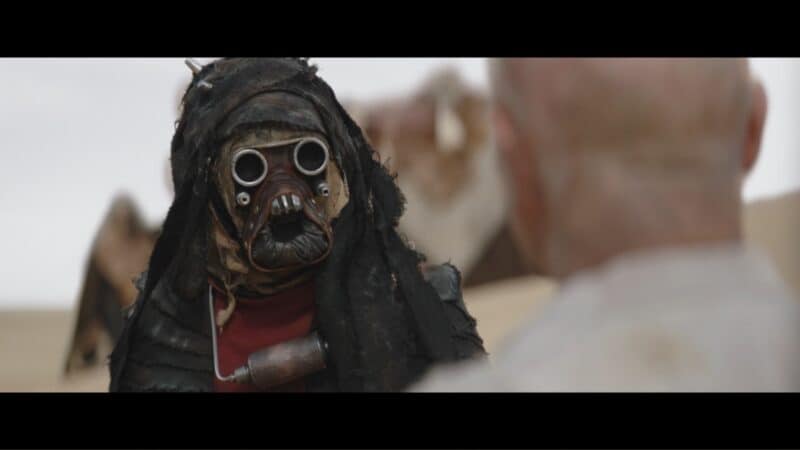 Wishing The Tusken Had Names

With that said, I wish the Tuskens had names to identify them by. I know their identity is based on attire and seemingly their staff, but names would help differentiate them better.

I feel that there isn’t enough being done in the present to not make it feel eclipsed by the past. The introduction of Jabba’s cousins didn’t add much, nor meeting the Mayor. We didn’t get notable personalities, and though the possibility of war could be cool, Boba Fett and Fennec aren’t the most interesting fighters.

Fennec’s specialty is sniping, so her hand-to-hand combat is serviceable but not where it needs to be if that will become her main thing. Then with Boba Fett? As shown, after nearly every fight, he is down and out, and that’s how I feel watching them.

And even outside the fight scenes, the politics just slow down the show’s pace so much, especially if you compare it to The Mandalorian. Which, don’t get me wrong, I get is drastically different since nearly every episode of that show had us either in a new place or traveling to one. But considering there was talk of touring Jabba’s former vassals, I am hoping we’ll see Tatooine in the rearview mirror soon. At least in terms of present day.

The Book of Boba Fett: Season 1/ Episode 2 “The Tribes of Tatooine” – Recap/ Review (with Spoilers)
Overall
Boba Fett’s journey to getting back his armor and being initiated into the Tusken saves the episode from the mundane and dull politics we are subject to.
Community Rating0 Votes
0
Highlights
Highlights Boba Fett's Past With The Tuskens
Disputable
Boba Fett's Present and Trying To Maintain Jabba's Former Territories
Wishing The Tusken Had Names
75
Follow Wherever I Look on Twitter and Instagram, Like us on Facebook, and Subscribe to the YouTube Channel.