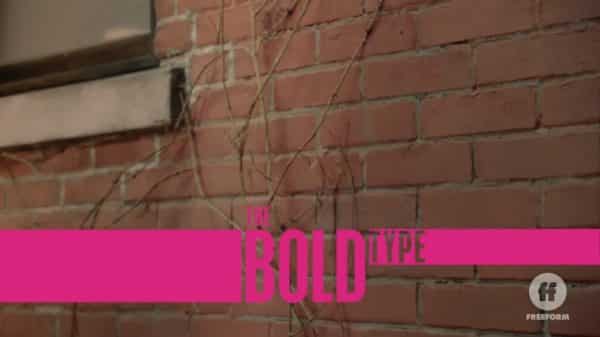 While it is Sutton’s wedding day, the decisions of Kat and Jane rival the nuptials.

For Progress, Sacrifices Must Be Made: Kat, Adena, Ava, RJ

With tax returns in hand, Kat and Adena decide to threaten RJ, while they assume he is on a date. However, who he is really eating with is his daughter Ava, the kind of attorney so fierce she goes on Bill Maher and holds her own. Which, as you can imagine, complicates Kat and Adena’s plan on blackmailing one of the most powerful men in the company.

So, what it comes down to, is who has the most to lose? Adena is on a visa and, as shown when introduced, when on a visa, you really can’t get into any trouble. Also, per her visa, she has to remain employed. Leading Kat to decide she’ll take the brunt of it since, besides being an American citizen, let’s not forget Kat’s privilege. Both of her parents are medical professionals in psychiatry and, between a run for local office and her work experience, she has a comfy enough safety net in case anything did happen.

And, naturally, it did. RJ resigned, and the board fired Kat. No word yet if Kat will be sued by RJ, however.

Oliver offering Sutton the stylist job complicates things. Especially for Richard since he had his conversation with Sutton about moving out west and using her 70,000+ followers to start over. However, with getting the man and being offered her dream job, Sutton reflects on that idea she had before, fear really, of having nothing to show for all her years at Scarlet besides a husband.

So, between that and kind words from her mom, she decides to take the job and speaks to Richard about it, the morning of the wedding, and naturally, he gets in his feelings. Luckily though, Jacqueline was invited to the wedding and taking note of what led to her and Ian’s marital troubles, she helps Richard sort through his thoughts and helps him understand where Sutton is coming from and where she is going. And with a new mindset in place, Richard and Sutton get married.

But, to really put some icing on the cake, Sutton learns, the next day at work, she and Oliver will have an assistant, Timothy. Who, hopefully, we see more than Kat’s former assistant, who hasn’t been spoken about since she left Alex to go on “The Bachelor.”

Being that Jane was the square of the group, she often looked to others as inspiration to find excitement, love, and more. Relationships, specifically, with examples like Sutton and Jacqueline, even Kat’s relationship with Adena, made it so, one would submit, Jane was looking to have something as passionate, consistent, and with long term potential. Yet, while Jane believes in love as much as the next person, with Ryan, things were always complicated.

For whether it was his former playboy ways or him cheating on Jane, there was this battle between what was known and comfortable vs. being in the dating pool again. Which, considering Jane did have a doctor for a boyfriend, remember Ben? Well, let’s just say Jane wasn’t doing too bad in that area.

However, she chose Ryan, and it seems between their history and what she gave up to be with him, she tried to hold steady. But, with lying to her, and it coming with ease, that was the final straw. So after Sutton officially married Richard, that was the last trigger Jane needed to put an end to her relationship. Making it so, rather than Ryan, Sutton and Kat will be her emergency contacts, as they should have been in the first place.

#TheBoldType #TheBoldTypeFinale Which would you prefer, a time jump or picking up to right after Jane's surgery?

Jane Not Modeling Her Life Based On Others

As Jane noted early on in the series, she grew up around men, and because of that, Scarlet was that older sister, if not maternal figure in her life. So, taking note of Jane’s decisions this half of the season, one could say that we saw Jane break away the need to have an example and decided to be her own example. After all, isn’t that why Jacqueline gave her a verticle, and she was listed as one of Forbes’ “30 Under 30?” It’s her own voice, not those that influence her, which makes Jane who she is. 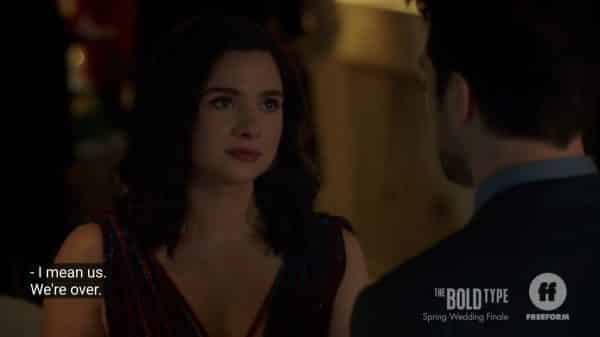 So, taking account of that, it seemed Jane realized that Ryan’s era is over. Leading me to hope she may give Ben another chance for her reason to break up with him still seems questionable.

Kat is really the only balanced character on the show. Jane has often gotten what she wanted, and even at her worst moment, she is usually portrayed as strong and capable. Sutton had to fight nearly the entire show to get anything and, even then, there were tough compromises throughout. With Kat, she started from a high ranking and privileged position due to her parents’ connections, and life has been a series of wins and losses ever since.

However, things were usually balanced and how Jane ended this season, and most seasons, is how Kat was. But with Sutton getting her dream job, and Jane ending things with Ryan and getting a double mastectomy, it seems the way things used to be has changed. Now Sutton is the one who is smelling the roses while Kat may have to claw her way up. Which makes the fact this is but a spring finale, not the season finale, a blessing since we know we’ll get to see what’s next for Kat.

Sutton Avoiding What She Always Feared Throughout the season Sutton feared become Mrs. Brady-Hunter and her life revolving around Richard and having nothing to show for anything she has done. Luckily, thanks to Kat pushing her in the right direction, she now has 70,000 followers and a new job. And, on top of that, an assistant. Thus leading Sutton to a new chapter in life that, like with her friends, represents a change that will surely shake up the storylines we’re used to seeing.

With that said, I kind of wish we got to see people get interviewed for Sutton’s old job. Especially by Oliver, and maybe with Sutton sitting in.

RJ has long been the person who said “No.” to nearly every notable idea from Jacqueline. So with him gone, does that mean she’ll have one less battle in the boardroom, or will RJ’s daughter, Ava, step into his role? Lest we forget, with Richard gone, we weren’t necessarily told who took his place and since RJ didn’t allow sabbaticals, surely someone was installed? And considering Ava is a media personality, in some form, alongside qualified, who better to step into the role of the corporate representative that reminds us creativity needs limitations to truly flourish?

Wishing We Got More Time With Babs

Sutton’s relationship with her mother is the only one consistently talked about, in terms of the lead 3 and their parents. Kat’s parents we haven’t seen in ages, we just got to see Jane’s brother and father this season, and her father’s appearance was brief, but Babs? Babs has been seen multiple times and is mentioned nearly every other episode. So the fact Sutton and her don’t talk more, and we don’t see her more often, it undercut their conversation in the limo a bit.

But not as much as Jane breaking up with Ryan and having her double mastectomy. The tone presented because of those two things, as Jane “feared,” it shifted away from Sutton and, honestly, made Sutton come off like a Trojan Horse for Jane’s drama. Though, as we’ve said many times before, while the show is about the three main ladies, Jane is essentially treated as the lead. Hence why, more often than not, the actress gets more opportunities to interview solo with major outlets than the other two.

Wishing We Got More Time With Babs - 71%

Sutton Avoiding What She Always Feared - 85%

Jane Not Modeling Her Life Based On Others - 87%