Wherever I Look
Recaps, Reviews, and So Much More
Home TV Series The Bold Type: Season 3, Episode 10 “Breaking Through The Noise” [Season Finale] – Recap, Review (with Spoilers)
TV Series

In the season finale, a handful of unexpected things happen. Some of which are welcomed but one major thing may leave your jaw on the floor.

Sutton, using friends and co-workers as models, earns praise and a potential job. However, after all the hard work being met with trying to sketch a dress alone, she reveals to Oliver she doesn’t want to be a designer. She explored the dream and has found what is her current reality is the one she wants. And alongside that, she wants Richard to explore his dreams. For him to work out in San Francisco and see if working with his friend is truly his dream job. Which would mean, yes, a whole lot more masturbating, but that is what batteries and phone sex is for.

Sometimes What The Mind Needs Is More Important Than What The Heart Wants: Kat, Tia, Adena

With Kat losing by a mere 319 points, she is devastated. After all, Kat doesn’t often lose when she puts her heart into anything. So losing the election is a very rare moment. One that comes on the eve of having to decide what should she do about this love triangle that has formed? Tia helped her get so far, and with her just gaining comfort in her sexuality, abandoning her for Adena would be cruel in a way. Hence why she plans to remain friends with her.

Then, when it comes to Adena, after losing the election, and having to throw out so much of what she thought was her next chapter, now Kat needs to take a step back. However, taking a step back for her doesn’t mean going backwards. So when it comes to Adena, it seems she wants a clean break. No being friends or trying to do things halfway. Just being cordial but holding off on being anything more. Problem is with that, Adena was just hired to be an in-house photographer for Scarlet, so she ain’t going nowhere.

Making Sacrifices For What You Want: Jacqueline, Jane, Ryan, Patrick

Ryan makes a full ass of himself, and Jane, in order to gain her back. Yet, despite his antics and that kiss, she doesn’t necessarily forgive or forget. More so, she holds him accountable. He said it was a mistake, he loves her, it won’t happen again, so she is trusting him on his word despite a part of her feeling she should leave. Which he is thankful for.

As for Jacqueline? Well, after the Pamela Dolan story her and Jane being feminist gets questioned and both take it to heart. However, Jacqueline a step beyond Jane since, with meeting a 14-year-old model dressed up to look like a woman, she realizes how much of a hand she plays in not empowering women but sexualizing children. So, she rips up the fall issue, 17 hours before it should hit press, and aims for a more inclusive product. One that Patrick, originally, wasn’t going to support, but he gets on board. Unfortunately, though, when he finally decides to be part of the team and not someone to question, challenge, and undermine Jacqueline, it seems to be the day before she is gone. That and possibly the hardcopy side of the magazine.

The Thing About Patrick

For the entire season, there was the need to question if Patrick was truly a feminist at all? Yes, he decided to reveal himself for the sake of pay equality, but every chance he had to undercut Jacqueline, exploit Jane, or manipulate Kat, he took it. And while, yeah, he allowed Jane to go off on him without any repercussions, but I think I understand why now. Patrick is a narcissist. Him flashing himself had very little to do with the woman involved and more so to deal with his ego. He wanted to be seen as this big time hero and feminist figure for exposing himself under the ruse of equality. However, all that did was set in place giving him the leeway to be an ass.

Think about it, after such a grand gesture, it makes a lot of his actions questionable, doesn’t it? Even him talking to Jane about her prom thing and letting her say how much she doesn’t like him. At that point, it seemed like he was between trying to win her over and show how little her opinion of him mattered. He had the board on his side and as much as Jane may have hated him, what can she do? Her ally, Jacqueline, had lost most of her power.

But, I think there is also a twisted Handmaid’s Tale bit about Patrick. For those who don’t watch, in a recent episode one of the commanders, Commander Lawrence, spoke to the lead character, June, about how he lets his Marthas (a type of maid) sneak about and do minor rebellions to allow them to let off steam. All so it doesn’t build up, they get especially sneaky, and can do serious damage. In my mind, that is what Patrick is doing. He doesn’t care if Jane flips out every now and then for it means she will not put in serious effort, as she tried to when he first arrived, to oust him. Instead, she will vent in the fashion closet, to a drinking game, roll her eyes, yet guess who still is her supervisor? 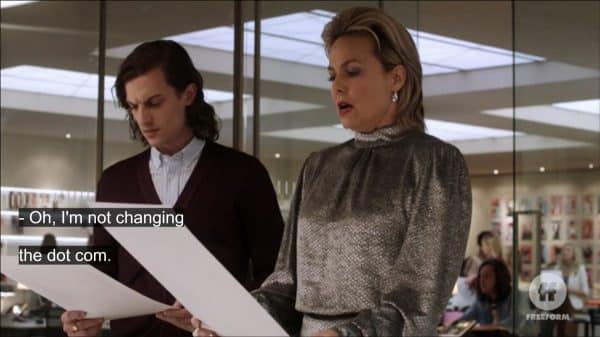 Often in shows like this, it seems everyone has to be in a relationship. As if, God forbid, someone is single for then they can’t have a compelling storyline, drama, or they can’t be shown as someone who has attractive traits. But, perhaps what I love most about Kat being single is just as she was on the border of playing Tia, she cut things off. However, taking note of how vulnerable Tia is, she didn’t cut her off completely since she realized the damage that could have done. Instead, she downgraded them to a friendship, was honest about the reasons why, and did the same with Adena. Just making it seem they might be over – period. At least for a few weeks or months.

This is a show about women, arguably for women, but can be appreciated by men. Though, generally speaking, men have a minor role in which their focus is mostly serving the causes of the ladies of The Bold Type. But, with this push for Richard to pursue his dreams, we got a bit of a shift. One that could very well mean either he may take on an Adena role next season, and be around but not often present, or we may see how a long distance relationship can work. Either way, you have to admire Sutton showing reciprocity and making sure she and Richard don’t end up with regrets in their relationship. Be it her regretting giving into what he wants, or him regretting putting his dreams aside for her. Two things which could eat away at all those cute moments as they could end up seeing nothing but sacrifice.

The Importance Of Imagery & Enabling A Culture

While the Pamela Dolan story was a bit of a letdown, as most of the #MeToo and #TimesUp storylines this season, you have to appreciate how Jacqueline made a statement. One which may have gotten her fired, but in calling out herself and her magazine for sexualizing children, she held herself accountable. Perhaps further than Sutton did for who is Sutton but, at the time, an aspiring designer following trends and working with what she has? Jacqueline, on the other hand, was the head of a magazine and has the power to end trends, begin them, or cut them short. So she could have really changed quite a bit and even started a difficult conversation about sexualizing children and how the magazine would put an end to that.

Hear me out – I’m not a Ryan fan, but maybe after watching a bit too much Red Table Talk, the idea of something like a kiss not being a deal breaker sounds like a good idea to explore. Especially since what you’re dealing with is a human being. Which isn’t to say Ryan deserves a past and there aren’t so many who don’t have speedbumps like he did. However, you and I both know the possibility of him getting put on time out and then coming back by the end of the next season would be possible. So, them working through what he did and coming out stronger sounds so much better, and complicated, than what most other shows would do.

So, We Couldn’t Have Seen Angie Get Woo’d By Alex? All I’m saying is, considering Alex’s #MeToo moment, I would love to have found out how Angie took that and worked through it. That is, on top of Alex learning from what was said about him in his approach of Angie. Plus, considering how hard Kat fought for Angie, I wish she got a bit of shine rather than being thrown into this couple and that being her reintroduction. For up until this episode, I feel like they barely said her name. Which, considering Kat probably relied on her heavily to pick up her slack, you’d think we’d see her around Kat like Sutton is around Oliver. Not like homegirl who used to be Sutton’s boss who we only saw in a flashback!