Wherever I Look
Recaps, Reviews, and So Much More
Home TV Series The Bold Type: Season 2/ Episode 6 “The Domino Effect” – Recap/ Review (with Spoilers)
TV Series

Things switch up in this episode of The Bold Type as Jane rebounds from all her struggles while Kat and Sutton are dealing with serious relationship woes.

The One That Got Away: Sutton, Jessica, Brooke

Table of Contents show
1 The One That Got Away: Sutton, Jessica, Brooke
1.1 Commentary
2 Tempted By The Lips of Another: Kat, Adena
2.1 Commentary
3 Everything Is Coming Up Jane: Jane, Jacqueline, Elena
3.1 Commentary
4 Highlights
5 Low Points
6 On The Fence
7 Follow Wherever I Look on Twitter, Like us on Facebook and Subscribe to the YouTube Channel.
7.1 Previous Episode’s Recap
7.2 Check Out Other TV Recaps

Something had to give. Sutton was spending night after night, coming in 3 AM partying with Brooke and while she made contacts, she would also drink a lot and try to cope with the fact Richard had moved on. Well, actually, rekindled is the better word. Because fate is so cruel, Oliver assigns Sutton to dress Jessica and with her not knowing who Sutton is, she spills the beans. She notes how they met in college, were in love and had chemistry, but her working out of the country ended things.

However, then Jacqueline got them back together and with them both ready for marriage, she sees that in their future. Which, as you can imagine, hearing all this as Sutton struggles to find a decent, never mind good guy like Ben, is hard to bear. So, Brooke and drinking becomes more and more tempting but then Sutton realizes Brooke isn’t really good for her. Whether it is bringing up the idea of doing blow or trying to make the nickname “Slutton” become a thing, it seemingly is over now. 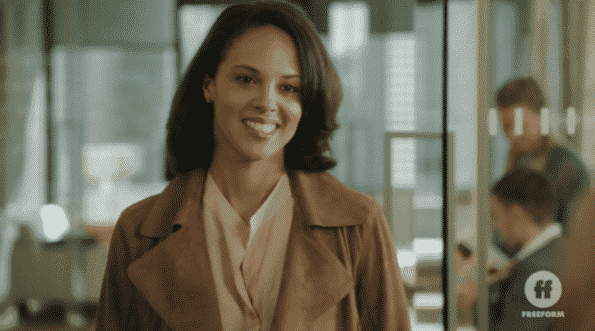 I don’t want to be that person, since Sutton is one of my favorite characters, but are we going to address the fact she spent $500 on miscellaneous expenses, was coming in puffy and late for days, and Oliver has a keen eye? Are you telling me whatever she likely spent on the company card hasn’t become a thing yet? Granted, Sutton wasn’t doing coke, and thankfully never went that far down the rabbit hole, but shouldn’t there be some red flag about that expense?

And again, not to sound like a broken record, but what about all those guys where were in the photoshoot? They all got jobs, they were all researched so if they had skeletons I’m sure someone would have found them, and surely more than just Ben was single right? Also, while it isn’t 100% clear how much time has passed since then, any conflict that could be brought up should be naught by now. Especially since Misty, Mixie, whatever her name is hasn’t been seen or heard from in at least 2 – 3 episodes at this point. Plus, after Jacqueline’s chat, and noting legal need not get involved, you’d think this wouldn’t be an issue.

With that said, I like Jessica and I really hope there isn’t some random issue or her being left at the alter so Richard can run into Sutton’s face. He served his purpose in setting a precedent for future men in Sutton’s life and it would be awesome if the show moved on. You know, use him for some legal thing. Sooner or later Kat is going to rub the wrong person right?

Tempted By The Lips of Another: Kat, Adena

Good segue, right? Because Kat does rub the wrong person. She rubs, grinds, and kisses someone who isn’t Adena. Her reasoning? Drinking and her curiosity? Making it sound like she is uses a dude’s excuse of having to sow his oats before settling down. And naturally, because Adena is past whatever phase Kat is going through, while she understands, it seems like she isn’t sure if she can deal with it. 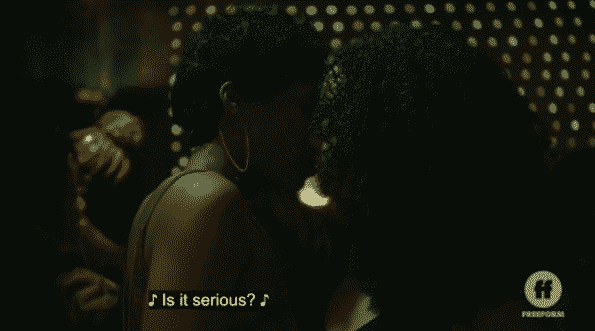 And the situation is very complicated for, as noted by Leila, and others, the lesbian scene isn’t that big. So Kat making out with some woman she just met? Oh, that is going to spread like butter on toast. For Adena has already become well known, Kat is new and may rejoin the market, and that means fresh meat.

But, question is, while curious, does Kat really want to be out there like that?

Couldn’t they just let Adena and Kat be gay and happy? Okay, Kat maybe coming down from the high of her first lesbian romance. That don’t mean she got to cheat. Plus, she pushed the girl off once, yet she went in again? I don’t know about you, but that would have been an awesome way to introduce how, in the LGBT community, “No means no” is also an issue.

But instead, we get served with how incestuous and predatory it can get. How, even with knowing, hearing Leila announce who Kat is dating, homegirl was all up on her and kissing this child. Making me feel more and more, they could have done more with this storyline than have it setup Adena and Kat break up – more than likely.

Everything Is Coming Up Jane: Jane, Jacqueline, Elena

With Jane getting nominated for an award, a Mandy, starts to get conversations going. Such as one with the “Daily Review” with a slight condescending editor. But, one thing he does, which is push for a follow up to Jane’s article on Jacqueline’s sexual assault, brings her full circle.

Particularly because, as Jane found herself catching a stride without Scarlet, she found herself less stuck in the fact Jacqueline rejected her. She found herself getting away from that hold Jacqueline has had but then she is brought right back in. Though with the follow up comes Jane meeting Elena. A woman assaulted by the same man who assaulted Jacqueline and who was a little upset with Jacqueline because her silence opened her, Elena, up to be assaulted. 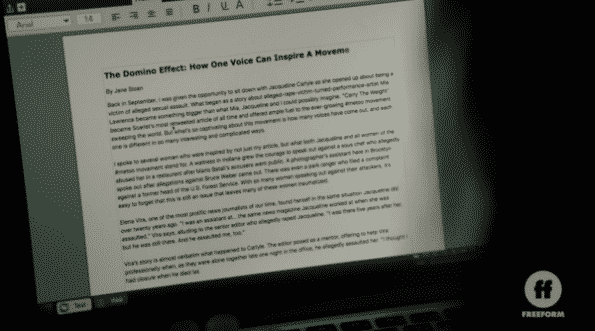 That interview made Jane unsure if she should include it in her follow up but with winning that award and trying to tell the truth, she puts it in. Not Elena blaming Jacqueline but enough where people get that not speaking up does have a domino effect.

And be it Jacqueline’s budget increasing thanks to a major award or Jane calling her out in an article, basically, she sees something in Jane. Something beyond that spark which drew her to Jane before but a whole new woman. One she offers a job to and Jane accepts.

I struggle with Jane. Did I really think they were gonna have it where she couldn’t find a job all season? Not really. Yet, as much as we see Jane work hard, there is something about her making these giant Herculean comebacks which sometimes takes me out of the show. Like, as much as Kat has privilege, as established in the last episode, nothing seems to come easy for her. With Jane, Sutton got her the perfect guy while she struggles; Pinstripe got her a possible avenue to make money and nearly got her a hook up with a job. She not only got a Mandy award nomination but won!

Now, I’m hoping I’m not a hater but it just sometimes feels like not counting Jane out has reached a point where it isn’t because she has moxy and takes initiative. It’s because the writers love her far too much to not craft a miraculous way for everything to be roses. Which could just speak to the importance of having good friends and a robust network. Yet, at the same time, considering the troubles Sutton and Kat go through, Jane just awkwardly stands out.