Wherever I Look
Recaps, Reviews, and So Much More
Home TV Series The Bold Type: Season 2/ Episode 5 “Stride of Pride” – Recap/ Review (with Spoilers)
TV Series

As Kat fights the lack of diversity at Scarlett, Jane deals with another magazine’s push for diversity keeping her unemployed. All while Sutton deals with being part of an affair.

I Didn’t Mean To Be The Other Woman: Sutton, Allison, Richard, Dillon

Table of Contents show
1 I Didn’t Mean To Be The Other Woman: Sutton, Allison, Richard, Dillon
1.1 Commentary
2 Check Your Privilege: Jane, Ryan, Kat
2.1 Commentary
3 Professionally a Boss, Personally a Mess: Angie, Kat, Jane, Leila
3.1 Commentary
4 Question(s) Left Unanswered
5 Collected Quote(s) & .Gifs
6 Highlights
7 Low Points
8 On The Fence
9 Follow Wherever I Look on Twitter, Like us on Facebook and Subscribe to the YouTube Channel.
9.1 Previous Episode’s Recap
9.2 Check Out Other TV Recaps

Life after Richard has been a bit hard. Finding someone who isn’t like Dillon, who is cheating on his wife, or even like Ryan, who may have charm but is annoying, is hard. Much less finding someone like Alex who makes for a good friend, but also you have a real sexual attraction to. But what are you going to do?

Well, for Sutton, taking note that Richard was one of the good ones, she looks into maybe trying for another go but with him having a new lady on his arm, she walks away. 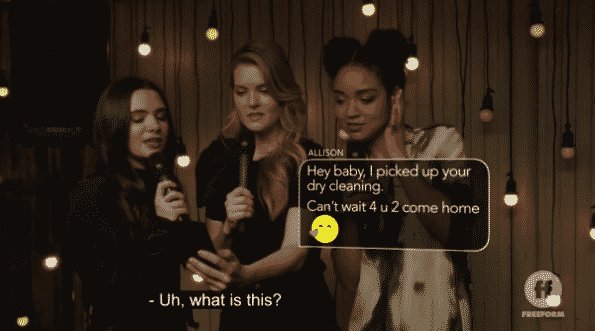 Sutton: Uh, what is this?

I don’t know if Sutton still has the numbers for the guys who were in that “Good Guys” shoot she did, where/when she met Ben, but that seems like a valuable Rolodex of guys. Just look at Ben and Jane, they are doing quite well. Why not see about one of the other guys who showed up and check them out?

There is no question Jane is talented. As is noted in an interview which Ryan hooks her up with, continuing to show the importance of networking, she is able to do “light fare and heavy issues.” Such talent makes her diverse and quite valuable. Making it where Jane thinks she is a shoo-in for Yes Girl! magazine. That is, until she learns from Ryan that they are trying to bring on a more diverse staff and diverse means different ethnicities.

Which, of course, upsets Jane because here she is with just having aced the interview, she has a college degree, actual experience, and checks off so many boxes and yet being white is an obstacle. A frustration she mentions to Kat who is a bit conflicted in a way. Being that she is bi-racial but has recently really taken to identifying as Black, there is a side of her who sees more people who look like her getting into the same spaces as a good thing. After all, it means less of a need to be self-conscious when you don’t feel like a token, diversity hire, or like you are being let in the room just to show some feign attempt.

Yet, on the other hand, there is a major difference between Jane and Kat. One in which, yes Jane is white, but also she comes from a middle class, if not working class background. If something happens to her, like Sutton, there isn’t asking her dad or brothers for help. She is screwed. This is unlike Kat whose parents are well off and on top of that, they are so connected that Kat got her internship and job at Scarlet because of who they knew.

Because of Kat’s privilege, it makes it a tad bit hard for Jane to take her seriously but then she gets it. For strip Kat of her parents and then she’d be without what little bit puts her ahead. Since, without that network, the money to allow her to fail, as well as money to go to school and appear qualified, her and Jane wouldn’t be having conversations. In fact, as noted in the next topic, Scarlet would have probably not taken a second look at her resume. With the recent rescinding of Obama-era policies in regards to affirmative action, The Bold Type finds itself with quite excellent timing. For the concept of white privilege has always been a bit complicated in the US. Mostly because, as seen with Jane, there is deflection or redirection. Because one person, or ethnic group, does well, there is this idea that policies for diversity or affirmative action are unnecessary if not racist. However, as Kat breaks down, while things are better they are far from inclusive. Making it where people like Kat are still very much exceptions more than some form of norm as they walk into a room.

I mean, just listen to Kat’s story. She graduated from college and thanks to her dad got a job at a big-time fashion magazine. Just in media alone, that is a foreign idea and most productions are written based off what the writers know or can imagine. So think about reality. Do you really think there are a huge amount of Kat’s out there whose parents hand them a silk safety net and a well-paying job when they finish college? Especially at an organization which is predominately white?

And, as Kat notes, Scarlett is verbally progressive but is still white dominate. Hence why Oliver makes that joke about being sent a memo next time it is Black people snack time. It’s a nod to how there are so few of them they need to look out and check in on each other. Something that, for a lot of Black folk, is done when you are so clearly few and far between. Just to make sure you have someone to vent to and that other Black person won’t feel the weight of representing their people alone because you decided to quit.

With Adena gone to a retreat, Kat has the apartment to herself. Though, with Leila asking about a tripod, and Kat still adjusting to the idea of dating someone, much less a woman, things get a little weird. Mostly in the form of a sex dream but also just having the temptation to cheat is a mental and emotional challenge.

But, in terms of her professional life, like many a Black woman on TV, while her personal life is on the brink of shambles, professionally she is an ace. Take hiring people for her department. As usual, Kat finds herself challenging the higher-ups, in this case, to hire someone without a college degree, and she wins. With support from Jacqueline and Richard, now a 20 something-year-old Brooklynite named Angie is on her staff.

Leading to Kat’s next big challenge: How much do you pay someone without a college degree, no direct experience, yet still fairly? 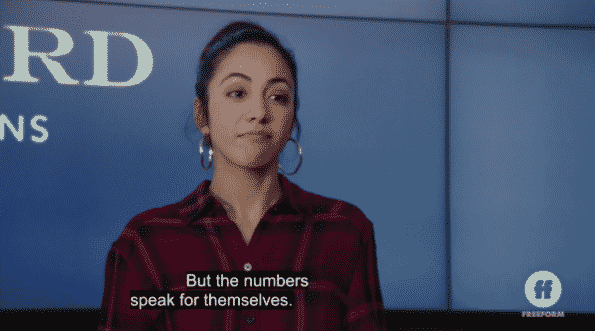 Angie (Shryley Rodriguez): But the numbers speak for themselves.

Why is The Bold Type really trying to throw a monkey wrench into Kat and Adena’s storyline? Especially cheating of all things. Clearly, when it comes to Kat, there are so many other things they can pull from so why pick that? Kat has shown signs of insecurity, the whole her not going down on Adena thing was an issue, and they could find so many other things which deal with Kat’s background which could cause conflict. Hell, they could bring back her privilege and show a bougie side to Kat to make it so she doesn’t seem like the perfect ally. Why be lazy and make cheating a possibility?

That aside, I really hope Angie isn’t a one and done character. For her story is very much a bold type story. She took a leap and met with Kat, despite feeling she’d never work at a place like Scarlett. Also, she kind of risked her job doing to second interview, with a company’s board no less, while some random girl covered for her. On top of that, now that she is hired, she has to learn corporate structure and experience just what Kat was talking about. On top of being one of the few women of color, she is a Hispanic woman of color. Much less, she is from Brooklyn but can’t be seen as a gentrifier like Sutton or Jane can be. There are layers there to be explored and I hope that doesn’t get pushed aside.

I’ve never worked harder in my life and I feel like I’m barely getting by. – Jane

So you’re all for diversity as long as it doesn’t’ affect you. – Kat

As shown by Richard and Ryan, two exes of the girls, using their network and influence to help their exes, it shows that ending a relationship doesn’t mean burning a bridge to never be crossed again. That person, guy or girl, could very well help you down the line with a job opportunity or even help your friend out. Also, in the case of Kat, while you have an obligation to be loyal to your friend, always be aware that at the end of the day, that is their relationship. Especially if you have to work with that ex in some sort of capacity. So while things may be awkward a bit, separate your friend’s feelings from the business you have to do.

There is always this question when it comes to shows featuring teens and young adults: Must they really date? It always seems so obligatory and with storylines like Dillon, it seems like it just gets used for some quick and easy drama to always have on standby. And while I recognize relationships, good and bad, are a cornerstone of everyone’s story, there is this wonder if any character could ever be okay with being single. To not treat that as missing out on something or someone but simply valuable me time.