Jealousy is a major issue as relationships and career progress are compared and contrast amongst the ladies.

Table of Contents show
1 Ryan (Pinstripe) vs. Ben (The Doctor): Ryan, Ben, Jane
1.1 Commentary
2 What’s Your Body Count?: Kat, Adena
2.1 Commentary
3 Put It On The Card: Sutton, Kat, Brooke, Jane
3.1 Commentary
4 Other Noteworthy Facts & Moments
5 Question(s) Left Unanswered
6 Highlights
7 Follow Wherever I Look on Twitter, Like us on Facebook and Subscribe to the YouTube Channel.
7.1 Previous Episode’s Recap
7.2 Check Out Other TV Recaps

Everything was going just fine with Ben until he decided to pray during dinner. With that, major red flag since Jane’s mother dying has pretty much put a hard pause on her faith. To the point, she isn’t an atheist or agnostic but just antagonistic towards faith. Not just Christianity either but calling Judaism a lifestyle. But, it is just because, all these years later, she is still in mourning.

However, with Ryan popping up at the coffee shop Jane frequents, so begins some flirting with the past. To the point, Sutton even predicts a love triangle but with coming to realize how much of a jerk Ryan is, Jane closes back that chapter of her life and communicates to Ben why she had issues with his faith and her own. Jane: The religion thing, it just still kind of bothers me.

Thank the lord Pinstripe entered and left briskly! Yet, I do have the feeling some fans might be mad since the handling of Ryan really seemed like a, “It’s not going to happen – move on and let it go.” But, with Ryan out the way, and Ben full force, so comes us starting to realize Jane is a bit problematic. I mean, I get her feelings towards faith but how she talked about Judaism and in previews how she talks about diversity, it seems that Midwest upbringing is going to clash with east coast culture something harsh.

Yet, I appreciate that these conversations are happening though. You can’t always have loud mouths and butt heads be the ones saying ignorant things. The leads have to as well for then it coerces conversation and showing, despite how awkward they can be, there is a chance for reconciliation. Maybe not all the time but that doesn’t mean the conversation should be outright avoided or ended with an agree to disagree stoppage.

Being that Kat hasn’t been in a serious relationship before, much less with a woman, this is all new ground and experiences for her. So, upon meeting a bunch of Adena’s friends and coming to the conclusion she slept with quite a few, that Adena maybe into serial monogamy, and maybe prepping a roster to replace Kat, she freaks out a bit. Especially since Adena is the type who thinks the past is in the past so that means she doesn’t need to speak about it with her present partner.

But it becomes clear that won’t fly with Kat because, even if she isn’t a journalist, she does prod and believe in investigation. So, to make things clear, Adena reminds Kat that she is missing her mother’s 60th birthday to be with her, is in a country that doesn’t make her feel all that welcome, and it is all because she loves her. Which, for now, calms Kat’s anxiety. 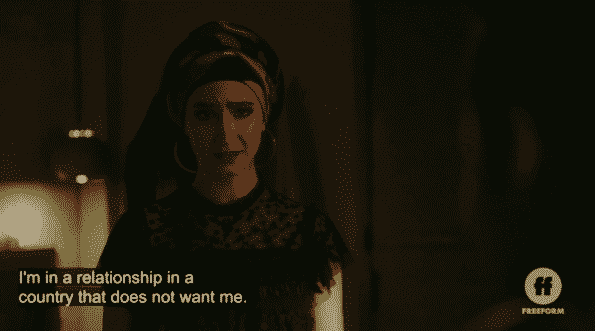 Adena: I’m in a relationship in a country that does not want me.

When it comes to a lot of shows which feature strong women who seemingly can’t handle their personal life, their relationship drama makes you want to roll your eyes. However, the way Kat’s jealousy was handled felt refreshing in a way. It was acknowledged, things were talked about, and while maybe not fully resolved, at the very least feelings were put out there so behavior could be modified.

All of which I recognize is very ideal but you have to love it sidesteps a lot of the BS we are used to. Especially considering this is a lesbian relationship and that means investment is really high for the community. So imagine them breaking up or going on a “break” during Pride. If FreeForm thinks they are being bombarded by Shadow Hunter fans, imagine fans of this show and the LGBT community adding their qualms in.

Put It On The Card: Sutton, Kat, Brooke, Jane

Sutton, Kat, and Jane all started around the same time yet Sutton hasn’t made huge leaps and bounds like them. Kat is the head of a department and even after a sudden vacation, is more trusted than ever. Yes, Jane maybe unemployed, but she was really making moves until she left Scarlet and fell on her face. As for Sutton? Well, she became an assistant and took a pay cut to do so.

Thus making her a little jealous because she keeps comparing her life to Jane’s and Kat’s especially. Even dating wise, to a small degree. So when Brooke comes into the scene and within one night expands Sutton’s network way more than it has expanded in 6 months, she latches on. Problem is, getting close to Brooke is expensive. On top of that, there is a question if they are using Sutton or she is simply buying their friendship and they are just hunching it as she foots the bill.

Either way you look at it though, $500 in miscellaneous spending is a serious red flag and an $800+ night? You know trouble is going to come from that. Especially in comparison of Sutton’s past expenses and taking note Oliver mentions his budget every now and then. Sutton is due for a stumble, right? She handled the Mitzi thing, the Adena thing turned out good, so she had to experience some growing pains with being in fashion. For there is only but so much Jane and Kat can shield her from in their friendship bubble. Like them, she has to take risk and hope, in the long run, they work out for her.

Problem is though, Oliver ain’t the trial and error type. He is not Jacqueline where he will walk you through where you messed up and will easily forgive. The reason he likes Sutton is she is consistent and hasn’t made mistakes. So, her spending $500 on miscellaneous? Well, let’s not forget who works in the legal department and may end up involved on a nice piece of change Sutton can’t explain.