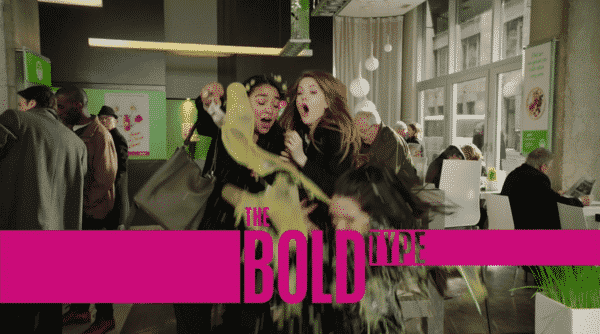 What’s in a reputation or a label and how much should one alter it considering their environment? Those are the questions posed.

Let’s be real, Jane was never an Incite kind of girl. She isn’t for sensationalizing things or inciting people. Does she want them to take note of what she says, like, comment, start a conversation? Yeah. But her version of hard-hitting journalist isn’t doing take down pieces. Hence why she tries to apologize to Emma who, in turn, makes her apology go viral.

Something that only leads Jane to want to apologize to Victoria, try to reach out to Emma again, but luckily her friends stop her. However, unfortunately, in response to the viral apology song, yes someone remixes it, Victoria sends Jane on live TV. Not only that, she has Jane severely tone down her style to something you know Jane would never be caught in outside of the situation she was placed in.

But, being a girl who knows when she is in trouble, she takes Victoria’s media training and tries to stay on script. “Tries” being the key word for it nags her to make it seem she was comfortable with what Victoria did and as much as Victoria is trying to protect Incite as a brand, damn is Jane doesn’t want to protect herself as a journalist too. So she tells the truth and it sets her free – as in Victoria fires her the next day.

One of the things that really was glaring at me this episode was Jane’s need to apologize. Something that you may notice women do more than men. So here is hoping that eventually gets addressed. Especially since each woman on here are on different paths when it comes to how they handle themselves. Of which, Jane is the main one to apologize while Sutton, Jacqueline, Kat, and definitely Victoria, are just about getting things done.

With that said, Jane getting fired could be interesting, depending on how they handle it. For this show is supposed to represent an alternative to other young adult programming right? So Jane now being unemployed, much less a writer unemployed, might mean her having to do things which deal nothing with her major, or what she has worked for. An interesting thing to explore since a whole lot of us got degrees we have no use for besides saying we got a Bachelor’s degree.

Though, as also hinted in previews, there is also the idea of going back to a job you loved and were comfortable in. Pride can be a wicked thing but learning it isn’t always about money and that, sometimes, it’s best to keep a good day job. Especially one which you rather enjoy for in your spare time, that’s when you can do what maybe your day job doesn’t give you the opportunity to do. I.e., Wherever I Look.

Check Yourself But Don’t Wreck Yourself: Sutton, Mitzi, Oliver, Jacqueline

Mitzi gossiping is really messing with Sutton’s mojo. She is still getting good assignments, but now she is questioning herself, especially when she has to interact with men. Which is a bit of a problem for it isn’t like Sutton can strictly work with women. Yet, her being awkward around guys, to the point of messing up, is a serious red flag for Oliver for this isn’t a trial and error kind of job he gave her.

So, being who Jacqueline is, she takes Sutton aside for a pep talk. One which recognizes the difficulty of the environment where men and women have this need to check themselves. Yet, she reminds Sutton that she can not help she has a magnetic personality. Especially since it is one of her best traits and is an asset in the business. And with that, Sutton not only handles the job but may have found Jane her next boyfriend. Also, she sets Mitzi straight to boot.

As you can imagine, with the #MeToo movement largely focusing on the wrongdoing of men, there hasn’t been a lot of conversation on how it affects women. Yet, Sutton’s storyline has been filling in that gap a bit. For, similar to Claire on The Good Doctor, we see how sexual harassment and the fears of the accusation affect women. In terms of Claire, it was how reporting it could mean an uncomfortable work environment in which you deal with not only gossip from your peers but lack of opportunity. On the flip side for Sutton, the conversation about your personality, perhaps sexual expression, leads some to think it gets you opportunities.

Which is a problem because, no matter the reputation, both sides don’t truly benefit in the long run. For an accusation pointed towards anyone crafts a reputation you just can’t shake. So, what can you do? If you are a friendly man or woman, do you just dial it down and shy away from touching and anything which could be considered flirtatious? Depending on your industry, maybe.

However, when it comes to Claire and Sutton, that isn’t an option. They work in industries which require close, sometimes intimate, relationships. After all, they both see people at their most vulnerable. Whether it is someone who is in a hospital needing surgery or someone who needs to be measured for clothes. Never mind getting their photograph taken.

So here is hoping, though it kind of seems over, as much as Jacqueline gives legendary pep talks, this doesn’t mean Sutton still isn’t a little bit cautious. After all, Mitzi she may have addressed but we don’t know how far those rumors spread. Oh, and before we move on, you have to wonder what Alex is getting when it comes to this and how he speaks on it.

When it came to Kat’s sexuality, it took her a little bit to accept a label. Which you can understand for when it comes to the LGBTQIA community, that label acts as a prefix which seems to redirect any and all conversation. Yet, as Jacqueline asks for a legit bio, something beyond what Kat’s Twitter and Instagram provides, for speaking engagements and the like, she struggles. So, naturally, she goes to Alex, strangely rather than Jane, for assistance.

This leads to him confronting her about not putting in the fact she is the first Black department head at Scarlet. Which brings up a lot of mixed feelings. For one, Kat doesn’t want to be defined by her race and two, as a bi-racial person, she doesn’t like the idea as identifying as Black for it means denying her white mom. An understandable argument to make yet Alex, being that he sees a Black woman, and the idea of how Black girls could look up to her, makes it sound like the badass he knows is hiding.

Something I should note is a statement which summarizes her entire feelings, of which takes part over two conversations. The point is though, Kat’s struggle with labels came from her parents, Marcus and Susan, struggling with them and not wanting Kat to deal with the weight of them. For Marcus, he grew up in segregation and not in wealth. So the issues of being Black, it seems he kind of kept that from being her problem. As for Susan? Well, like you may have recently seen in the news, she had the issue of trying to prove her curly haired, brown skin child was hers. So, that is her reason for not pushing labels.

All of which is taken into account, alongside how Adena represents herself as a lesbian Muslim woman, which makes Kat think, this is the time to embrace her Blackness and what it means.

With a lot of bi-racial characters on television, when it comes to race they usually just default Black. In fact, similar to Sam on Dear White People, we see them go as Black as they can to the point some argue they might be compensating. An unfair idea but its how the majority get portrayed, or rather how the are portrayed in the more popular outputs of the media machine.

Getting back to Kat, it was nice to meet her parents and get a vibe of where she came from. I could only hope they come back around again and didn’t just show up to illuminate us on one of the peculiarities of Kat’s personality and that’s it. For meeting the girls’ parents, I must say, is something I’m quite excited about. Especially Sutton’s because her mother was painted as something else in season 1.

Oh, but let’s back up and bring up Alex. Now, I get that Scarlet has diversity, but still presents the needs for gathering up amongst your own, but he was out of line wasn’t he? Especially with his whole, “you’re not a kid anymore” talk. Like, at your age Alex, in NYC, and in this media climate, why are you really going to jab someone about how they identify? It turned out well in the long run but that move reminded me that Alex has a bit of a douche side to him.

“I want it regardless of my race, not because of it.”

“[…] when we sensationalize people for the purpose of getting more eyes on a story, that story gets lost.”