The Bold Type: Season 1/ Episode 8 “The End of the Beginning” – Recap/ Review (with Spoilers)

With layoffs hitting Siemen, and possibly Scarlet, so comes the question of what life could be like if any of the ladies lost their jobs.

The One With The Most Options: Kat, Adena, Jane, Sutton

Kat has had it fairly easy outside of her personal life. Due to her dad, she got the Scarlet job three days after graduating. Since then, she was the first of her friends to be promoted out of being someone’s assistant and while they worry about layoffs, she is outright told she is safe. Something that bothers Jane, maybe Sutton a little bit. If only because Kat tries to maintain the privilege of knowing what is around the curve and follow Jacqueline’s directives of not throwing fire on hot gasoline. But, as usual, after Jane makes it all about her, she apologizes.

Leaving Kat a whole lot of room to think about her and Adena. Someone who isn’t really clicking with Coco nor can find her mojo in France. Making her daily calls with Kat perhaps the silver lining of her days. However, this constant contact makes it hard for Kat to move on. However, with Kat talking about making bold moves, instead of doing what seems to come easy, it inspired Adena to perhaps try to move back to America and reunite the dynamic duo. 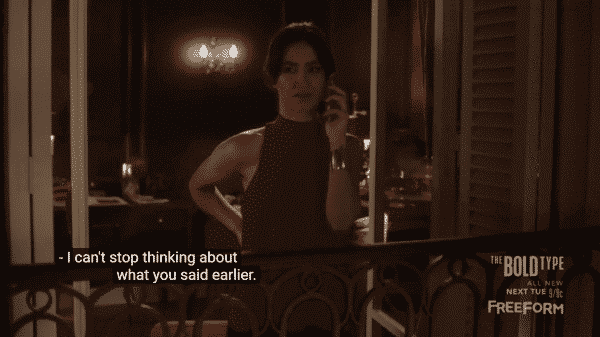 I grow increasingly tired of Jane and I cannot imagine dealing with her if The Bold Type is expanded to an 18+ episode series. For while I get no friendship is perfect, it always seems when there is a conflict in that group, she is at the center of it. Which I find amazing for Kat is the most privileged one of the three yet also is the hardest worker. Then, when you add Sutton to the mix, she has the most to lose but you don’t hear her whine, complain, and lash out as much as Jane. URGH!

But, onto the happier topic: Adena may be coming back to America! Which, based on next week’s preview, seemingly is going to be a bumpy ride. I’m not sure if it is an immigration thing or what, but it does seem the honeymoon period may be over and now Kat will be in the thick of it if she wants her and Adena to really be together. Which, I’m looking forward to seeing. Especially since it really seems Adena may have presented the first real challenge for Kat.

Not to imply the idea that everything has been handed to her. However, when it comes for Kat, it does seem things have often fallen into place. For while, yes, there was the cyber bullying and the breast campaign going awry, arguably she left both having the upper hand in the long run. So with Adena, similar to maybe how life has been for Ann in Claws since finding Arlene, she has someone who, outside of work, gives her a reason to use all that energy and effort and put it into her personal life.

With Jane’s sharing and likes down since she went political, and hearing about the layoffs, there is some desperation. Even to the point of writing an article about butt facials. That is, until she, like Alex, get called by Incite into maybe taking a position there. Now, for Alex, we have seen why he would take that job. Jacqueline, from what we have seen, doesn’t bring him in as one of her favorites and has more than once favored Jane over him. So, combine that with him being laid off before and unemployed for two years, him making a move makes sense.

As for Jane? It seems to be a move based on insecurity. After all, Jane’s whole narrative is not being sure of herself. Yet, in the long run, proving she deserves to be in the room. Hence why the representative for Incite seems to choose Jane over Alex. Leaving us to wonder if she may choose to take the job.

I really don’t want to spend two commentary sections speaking on how I’m just not clicking with Jane. So I’ll just say this, no one believes she is going to take that job at Incite. I would love it if she did, for it would mean her venturing to a smaller platform due to opportunities and not prestige, which has its own Sutton like lesson to it. Since, at least to me, the goal seems to always be about getting into a big name college, a big name job and then working your way up. Making the idea of Jane going to Incite, while still unlikely, at the very least intriguing. For she is outright told they are a bit of a niche brand, but one which is growing – including with a cable tie-in. Meaning Jane could put not just her voice but also her image out there. Making it so she really could get to own her message.

Oliver is stuck in a foreign country and with that, it means chain of command has to handle things. Making Cassie the head of the department, specifically an upcoming photo shoot, and Sutton her number 2. Problem is, Cassie is not ready to play back up for Oliver. To the point, she just walks off the set of the photo shoot as she hears about overages and is overwhelmed with decisions.

Leading to Sutton taking over and hitting it out of the park. Yet, when Jacqueline gives praise, she lets Cassie steal her shine. Something Jacqueline learns about through talking with the photographer and, kindly, admonishing Sutton for allowing her to think Cassie handled things on her own. If only because, in the long run, that would hurt Sutton’s department if they relied on someone like Cassie who couldn’t take the heat. Thus giving us this week’s teachable moment: When you do the work, make sure you don’t let someone steal your shine. I continue to love how Sutton is written and performed. Her realness about what life would be like if she suddenly was laid off hit home. Especially since working class people who rarely are stars of shows like this. Usually, it is the Jane and Kat types who have safety nets. So to have a consistently seen character who doesn’t look at unemployment as an opportunity or something they can survive through, got me weirdly excited.

Though I do wonder, as Sutton becomes more sure of herself, and moves up, will she eventually forget where she came from? It’s something I fear with every accomplishment. But, considering her mom is bound to show up sooner or later, I suspect just when she is about to get up on her high horse her mom will knock her off.