Outside of one or two moments which are eye roll worthy, The Bold Type remains consistent. All the while setting us up for the idea, not everything will be an obstacle these girls can overcome. Because sometimes the “enemy” is genetics.

“Prevention is always better than treatment.” 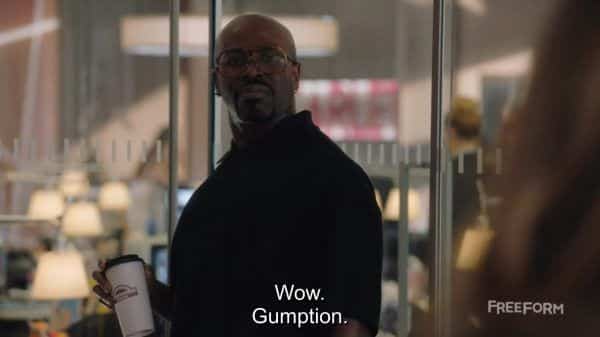 Everyone’s should be favorite – Oliver

With being an assistant 3 years to the most demanding person at Scarlet, naturally, Sutton has made many friends, outside of Kat and Jane. One of them is Jenny (Jennifer Miller[?]) who seemingly moved onto a job, outside of Scarlet, working for this designer named Paduano or for the company which houses their jewelry. Because of her, and Sutton’s networking skills, she is able to get the pendant Oliver wants all in exchange for a dress. Fair trade right?

But, things can’t be that simple. As Jane has a crisis due to going off on Jacqueline (more on that below), she rushes to her aide. Thus causing her to lose the $5000 necklace. Alex revealing his feelings for Sutton

Which of course sends Sutton into a frenzy. But Alex ends up being the one who provides some of the best help. He sparks the idea to check a security camera to find out the cab company’s name and also the cab number. He then goes with Sutton to a dry cleaners and harasses the attendant for the video feed. Making it seem like he is the unofficial member of the squad.

But the truth is, he wants to be something beyond that. He has feelings for Sutton and if it wasn’t for Richard, who he knows Sutton is dating, he’d ask her out. Alas, all he can do is just shoot his shot and say he would have loved to kiss her after all that happened.

A have such mixed feelings about this. If only because I really would love to see a relationship between a guy and a girl, one which is healthy and supportive, which doesn’t evolve into a crush. Yet, at the same time, I dig Alex. Not just because he is a nice dude but even with what little we know of him, there is something sort of nerdy and intriguing about him. Making him shooting his shot something I hope sparks new information. When a hug feels just a bit too nice, eh Alex?

Though, with that said, how does Sutton feel? For, as we have seen, Alex is friendly to both her and Jane, Kat not so much, and that leads to quite the problem. Said problem being, was he being nice to both all this time just to be put into consideration? I mean, call it what you will but you have to admit Alex has gone the extra mile many times. So it kind of does seem like he was putting in the work to make his move now.

But enough about Alex and his intentions, let’s focus on Sutton. I love her assertiveness, as does Richard. Much less, I feel like as much as Kadena (Kat and Adena) are an important staple of this show, articles could be written about Sutton to. For example, I follow, on Twitter and Tumblr, http://howtogrowthefuckup.com/. To me, I can imagine one of their articles, or linked articles, referencing how Sutton shows how to get ahead at work. Be it networking with people, if not at least building up the kind of trust where there is mutual reliability. Knowing your worth and not just in terms of salary, but possible perks. Knowing what your safety net is, and possibly who, and calculating what big leaps you can make because of it. I could go on and on, may write the article my damn self, but at a later date. 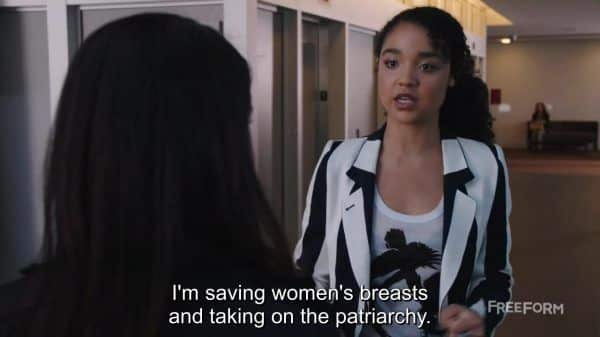 Kat, for breast cancer awareness, is flooding Scarlet’s social media with nipples. Something which gets them flagged, a lot, on Instagram. Something which is a red flag for the board, and Jacqueline, for they have 2.1 million followers there. So their social media director’s crusade isn’t the best thing for them.

After all, while Jacqueline, at the very least, understands the sexism in men getting to have their nipples out but not women, the argument is: You want to lose 2.1 million over some articles which will get buried in archives within a few days? So, needless to say, legal, the board, and Jacqueline shut her down.

As for Adena? She is in Paris and Kat is in contact. Only really trying to be friends, but we’ll see how long that lasts. Jacqueline questioning why Kat’s fight is so important?

I sort of wonder where Kat gets this problem with authority thing from. With two parents who are therapists, assumingly the stereotypical kind, where is this need to “Fight The Power” from? Is it just a millennial thing or are her parents activist alongside therapist?

Bringing up something I hope we see soon: All of these women’s families. For between Sutton’s mom, who seems like a mess; Jane’s family of men; and Kat’s two $500 an hour therapist parents, I need to know the people who helped mold these girls. Dr. Hendricks (Patricia Summersett) being questioned by Jane about early diagnosis of breast cancer – specifically, being someone who believes in a double masectomy for women in their 20s.

Jane’s mom had breast cancer at 32 and died around the time Jane was in Kindergarten. As you can imagine, it is a sore subject. Which makes Jacqueline pushing Janet to see this Dr. Hendricks (Patricia Summersett) who is talking about screening 20-year-olds scary and kind of ridiculous. Well, at least in Jane and Jacqueline’s eyes. However, Scarlet magazine is just as much about style as it is women’s health. So with that in mind, an article Alex pushed gets handed to Jane. One which sends her over the edge.

After all, even though Jane is 25 and her mom died 2 decades ago, it is still her mom. She is a person who, unfortunately, Jane has to be told about since her only memories of her seem to be of her dying. So walking into Dr. Hendrick’s office and seeing women dealing with cancer is triggering. To the point, she tells off Jacqueline for trying to push her to go deeper. Even makes it sound as if Jacqueline and the magazine are trying to exploit her and everyone else while they remain sterile and unknown.

Leading to two things: The first being Jacqueline revealing herself to Jane [note]Jacqueline reveals where she lives, the fact she has a husband and two sons, alongside a dog, and that she loves to cook Cambodian food, play Cello badly and takes a pill for her cholesterol.[/note]and Jane taking the genetic test. Leading her to learn she has the BRCA1 gene which makes it so her chances for breast cancer skyrocket to around 80% in her lifetime. Which Dr. Hendricks sets a plan for and Jane’s friends sit with her through the process. 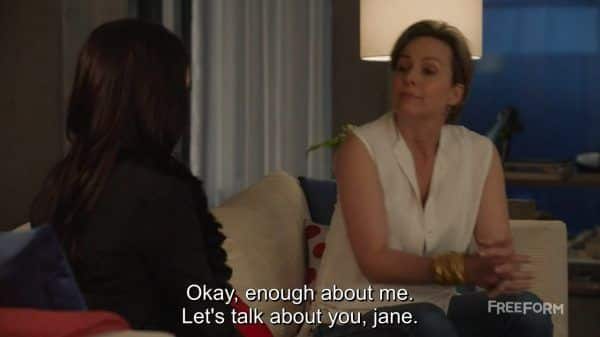 Is it wrong to say I’m glad everything didn’t go right for everyone? If only because I had to roll my eyes over Sutton losing the jewelry then luckily finding it. So Kat not winning over Instagram and this Jane diagnosis helped bring back the idea these girls are real people. Not characters who constantly should be seen as empowering and #Goals, but actual people who go through stuff. Things, even with us getting a scripted view of their life, we can’t fully understand.

But with that said, Jane’s breakdown in front of everyone was the other eye roll moment. If only because I can’t imagine someone flipping out like that publicly. Now, granted, I’ve never worked in a creative environment and have only an inkling of experience working in entertainment, so maybe this is something you see in those industries. However, that moment seemed like something which could only happen in media and combined with Sutton losing that jewelry, I feel like we got our first two out of place moments on the show.