The Bold Type: Season 1/ Episode 5 “No Feminism in the Champagne Room” – Recap/ Review (with Spoilers) 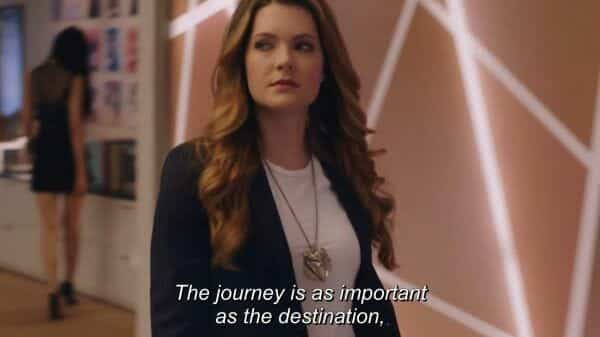 Though I consume so many hours of media weekly, I still find it amazing when a movie or show has a moment that gets me teary eyed or inspired. For, to be honest, sometimes I just feel like I’m on autopilot but then there is Wednesday and Thursday morning when I usually watch The Bold Type and Queen Sugar and I feel renewed.

For while there are certain elements of both which may not seem new, there is a richness to their characters, of very different worlds, which have this human quality. Not a character who has one storyline thrown at them after the next, but someone experiencing life. One you can find inspiration, empathy, and even a need to reflect due to watching.

Morgyn Stanley (Amber Goldfarb) was a Wall Street banker who became a stripper. It isn’t necessarily 100% clear why, but she seems happy and empowered by this career change. However, being that stripping carries a stigma, besides being a lucrative job, Jane making an article about her which was a bit too revealing causes problems. The kind which got Morgyn’s kid kicked out of school.

With that, Morgyn sues Scarlet, Steinem, and Jane. Something Jane makes worse, at first, because she makes it about her. How she feels and what her intentions were. However, with time, she realizes the damage she did and apologizes. Which helps ease tensions a bit. Morgyn still gets money for a settlement, but at least the situation doesn’t go public with a trial. 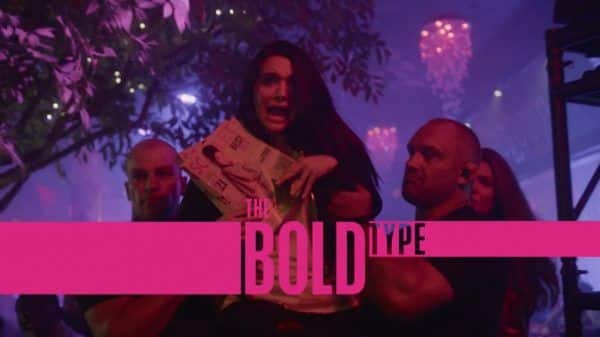 Would it be rude to say I feel the show is injecting Jane into situations as if she is the lead character? For, as of now, I see this as an ensemble but with the way Jane is handled where, when she walks into a room, it becomes about her, it is starting to bother me. Such as her playing the comparison game with Kat and Sutton about who has the biggest problem going on. Which I get, is something that friends do, but something about the way Jane talks during the whole Morgyn Stanley thing is leading me to think she is just a little too full of herself. In the way that most people hate millennials.

A Leap of Faith: Kat, Adena

Kat is used to one night stands and flings. In fact, that is all she knows. She hasn’t had a real, let’s argue, make mistakes, and work through it type of relationship. Much less, any at all. So this whole thing with Adena and them starting off something with Adena cheating on her girlfriend is a bit much. On top of that, Adena breaking up with a woman she was with for three years to begin something with Kat? Someone she didn’t travel with and experience so much of life? It’s intimidating. Coco is intimidating. Not in a “Catch me outside Kat,” type of way. More so in a “How can I compare” kind of way.

So, with all that in mind, Kat gets scared and breaks things off – dirty. That is, by text and then shuts off her phone. Leading to Adena, because she isn’t about that childish nonsense, showing up to Scarlet and confronting Kat. Which leads to Kat to go stone cold on Adena and drive her away. Something she tries to revert on later but it is too late. Adena is off to Paris to try to make up with Coco.

I don’t know why I was crying when Kat was doing the soul cycle thing, but I guess it is because it is easy to understand her fear. Relating this to the next topic, when it has come to intimacy, Kat has always had a sort of safety net. She never had to worry about finding the next one because it wasn’t like she was trying to make long term investments. If she was attracted to you, that was all she needed. For with one night stands and flings being the focus, she was just there for the honeymoon period.

So, being in that mindset, you’re never really investing, or open to investing in the actual person. A flaw is just a reason to leave and I’m sure Kat took that as a sign that it was time to squash things. Yet, Adena is different. She left herself open and vulnerable and I love all of this has came just from a few kisses and spending time together. Really trying to understand the other person.

For, be it full grown adults, young adults, as well as teens, it seems the peak of a relationship always seems to be sex and that is when love is discovered. Yet with this situation between Adena and Kat, it feels like love was discovered because of closeness. Because of how Kat felt when she realized she may have screwed up a good thing for her. Which is an unfortunate way to discover you love someone, but it is part of what makes this show feel authentic. Pushing someone away only to realize how much you want, but are scared, to have them close.

And, if I may add, I’m glad they had Adena talking about praying and doing the 5 Salats on camera. For it is the little things that matter, you know? Not just having a character say they are Muslim, but also show them practicing their faith. Be it through prayer, the hijab, but also noting there are days she doesn’t pray 5 times a day all the time, and may not some days. For, as many articles about Adena’s character have stated, it shows that the Islamic religion holds people who are just like Christians. They are faithful and practice, but they aren’t always to the T and perfect.

What Oliver is willing to pay is below what Lauren pays Sutton now. With that in mind, it is like, on one hand, Sutton has her dream job, but on the other, it isn’t the pay she needs to survive. Though, to make matters worse, Lauren has already hired a new assistant named Taylor (Aiza Ntibarikure). So it isn’t like she can just renege and revert. So, being that Sutton is a big girl, she asks for a raise. That doesn’t work out. So Jane and Kat are talking about pulling a Nora Ephron and telling Oliver that no raise means no me. Which, for Sutton sounds likes the worse advice possible. After all, she doesn’t have Kat nor Jane’s safety net. Kat has money and Jane’s family is stable. Sutton can’t make power moves without possibly screwing herself over.

But, with her not being able to get a raise, she instead looks for perks. They include paid lunch three days a week, guaranteed overtime, per diem for travel, and after three months they can revisit Sutton’s salary. Something which Oliver agrees to and the paperwork gets done. 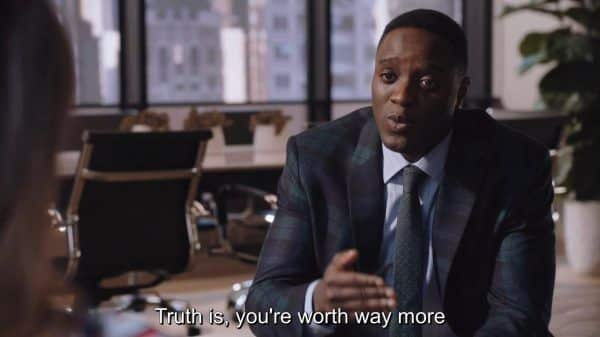 Honestly, there are times I think Sutton could have her own show. For there are just elements to her character which have that rare type of shock. That “I’d never think of that” kind of shock. Like the idea that, with a low pay, but knowing your worth, to instead ask for perks. Not something like more time off or something like that, but what she asks for. Which I should note, she didn’t think up on her own, Kat came up with the perks idea and Sutton executed it.

But that’s beside the point. I just like how, while Jane gives off that usual, I can talk my way in or out of everything, Sutton is experiencing something which feels less like a fantasy. Something that you can easily connect to, be inspired by, and you could actually do if you had the guts. 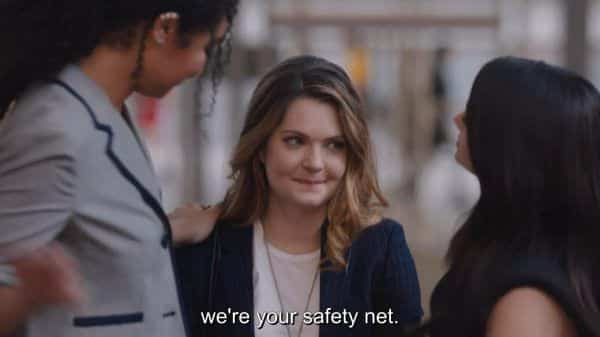 Though, before we end this recap, I have to note the beauty of her friendship with Jane and Kat as well. For as self-centered as Jane can be, and Kat can be, well Kat, when they take it too far or even do a disservice to one another, they apologize and makeup. They even provide each other with the support they need to take risks that Jacqueline can’t provide. All so each one of them can be the bold type.