Home TV Series The Bold Type: Season 1/ Episode 4 “If You Can’t Do It with Feeling” – Recap/ Review (with Spoilers)
TV Series

The Bold Type: Season 1/ Episode 4 “If You Can’t Do It with Feeling” – Recap/ Review (with Spoilers) 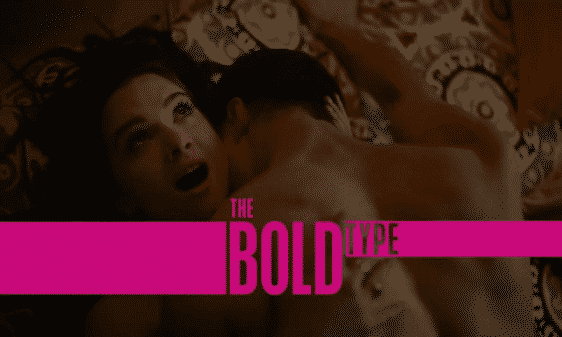 Taking initiative, believing in yourself, and not giving up. Generally, these are framed messages in a school. Yet, with The Bold Type, they are made into real world examples. The kind you can really follow and inspire to incorporate into your life. For, as said in episodes 1 -3, this is a show made to think beyond petty villains and soap opera drama. It is about presenting the real life of characters whose circumstances are rooted in some form of reality. A reality which can be relatable to viewers.

The Up and Comer: Jane, Jacqueline

After Jane’s article, she gets invited to be on a “Rising Political Voices under 30” panel. Something Jacqueline is quite proud of and is even deciding to use as justification for Scarlet having a political vertical in the magazine. Something which freaks out Jane for bad enough Jacqueline was going to be there. But now to add Richard and his opinion may be swaying the board? Never mind Ryan being there and her trying to, seemingly, keep things casual with him, despite him giving her at least two orgasms – so far. Oh, and lest I forget, Alex is going to do an article and ends up live streaming the event!

But then bad becomes worse for Jane is sharing the panel with people who really have been doing something. They have reported on wars, the white house, are writing books, and then there is her. She has just her title and no real accolades. Yet, she powers through it, deals with being trampled by this guy next to her, and survives. In fact, she does better than survive. She seems to resonate with some of the viewers of Scarlet. Maybe not in the way she wanted, but she gets her point across. 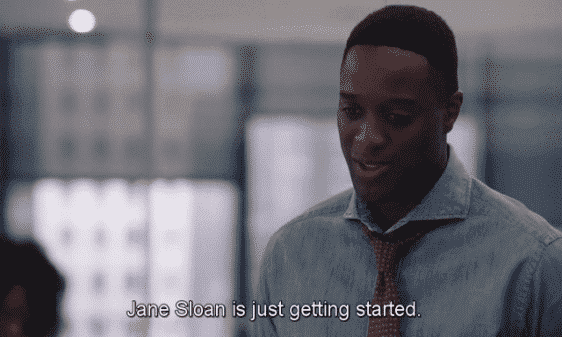 I think we can all agree we need friends like Alex and a mentor like Jacqueline in our lives.

We’re not going to put any time into Jane having her first orgasm since she isn’t taking Ryan seriously. So I won’t either. Rather, let’s focus on this panel thing. It is kind of exciting that she was invited, not that Jacqueline put her name up, and Jacqueline had enough faith in her to put one of her ideas on Jane’s back. Never mind live stream it. For as nice as it is to have a mentor, it doesn’t mean much unless they do as Jacqueline does. That is, push their mentees to their limits, encourage them to take chances, yet provide them a safe place for if they fail. 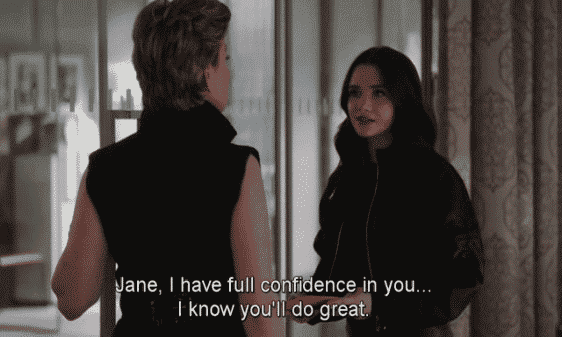 Which Jane didn’t at all. She got valuable experience not writing her thoughts but speaking them. Much less while amongst people who aren’t necessarily more talented than her, but were simply provided different opportunities. Another facet I found interesting about the situation. For, a lot of times with this show, I feel like they use these highly relatable characters to empower their audience. Really make it so Jane’s thoughts and ideas about Scarlet being that big sister or maternal figure also is extended to us.

For, and maybe I speak for myself, there are times when you kind of question why was my name picked out of the hundreds or thousands? And, unlike how most shows would have handled the situation, Jane isn’t shown as someone who knocked it out of the park. Yet, thanks to Jacqueline, she is reminded that while she may not have the accolades the others had, or have said much, what she did say still resonates with someone. Someone who perhaps didn’t know how to put their thoughts and feelings into the right words until Jane said them. 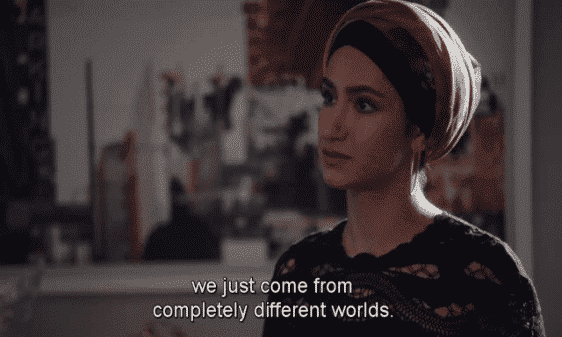 With what happened to Adena when she returned home, naturally, she is thinking about spending more time in the US. For while the political climate isn’t necessarily the best, it is still better than being a Muslim lesbian back home. So, with that in mind, she is trying to stay the legal way through having her work visa extended. That’s where Kat comes in.

What Adena needs from her is a character reference. Which Kat feels maybe all she may want from her. Leading to Sutton noting that maybe Kat should try to use the character reference letter as a way to get to know Adena. See how she feels. But, low and behold, as much as Kat and Adena click, Kat’s mindset doesn’t seem to be able to understand Adena’s point of view.

That is, she doesn’t fully understand the limited options of someone in Adena’s situation. Like when a guy says a slew of Islamophobia things, Adena doesn’t have the autonomy to really say something back or hit him, like Kat does. For, never mind being arrested and maybe getting deported, there is also the bigger story involved. That is, the weight of the Muslim community who she represents.

Something Jacqueline has to open Kat’s eyes to as she bails her out and helps her understand what’s going on. Leading to Kat apologizing and confessing her feelings. Leading to a passionate kiss. 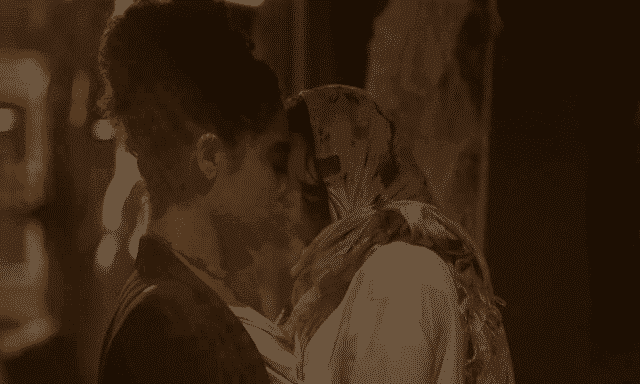 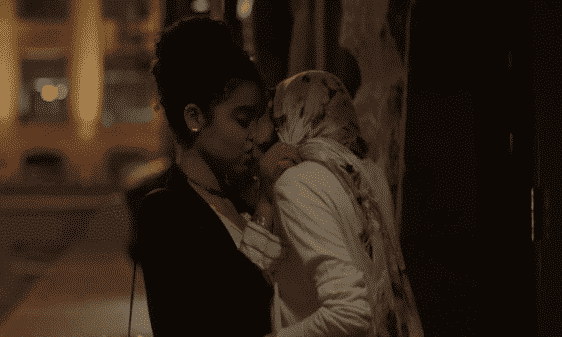 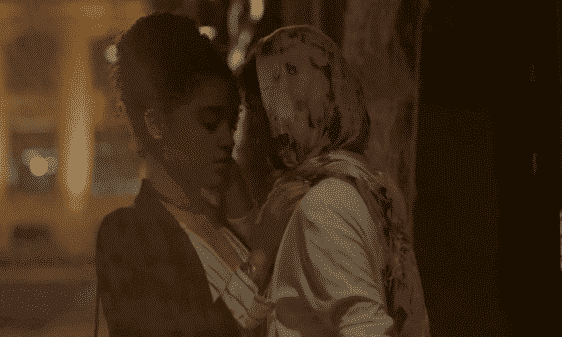 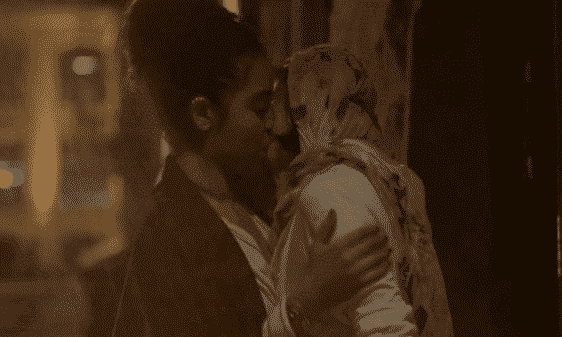 Though, that isn’t all that comes out of Jacqueline’s conversation with Kat. Jacqueline herself decides to be as bold as the girls she mentors and never mind the board’s worry that Scarlet may alienate readers by talking politics. For, in her mind, the women who read want to be engaged and the first article that will be posted will be based on Kat’s experience. Not with being arrested, or being in a relationship (?) with a woman, but an outsider looking into what it is like to be a Muslim when Islamophobia isn’t just an occasional thing but a political issue. 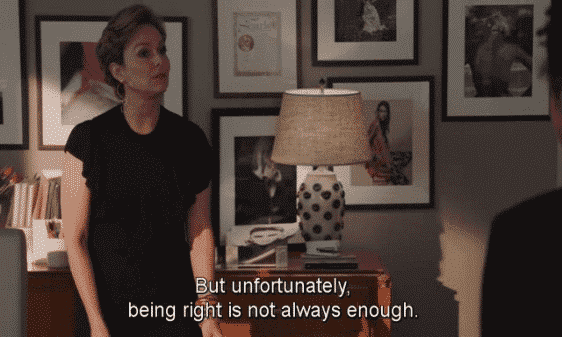 I really promise that I’m not trying to make every episode recap/ review of this show a long read. However, in an ABC Family tradition, you get this vibe that something is trying to be said here. Not your usual nonsense featuring Abercrombie types, but actual modern issues that people deal with. Be it what it is like to be Muslim, much less part of the LGBTQIA, in the Trump era. Much less, dealing with both those in Washington and those in your neighborhood making you feel unwelcomed. All the while, knowing that if you speak out, and fight back, it just leads to more hatred. For now, you are challenging your oppressor instead of cowering and whether it is with words or your fists, often you are faced with an uphill battle.

But with that said, I’m glad they didn’t throw police brutality in this. Granted, when it comes to the conversation about police brutality, Black women are ignored. However, I’d hate to see this show drown itself in issues like The Fosters did in its first season.

My True Self: Sutton, Oliver 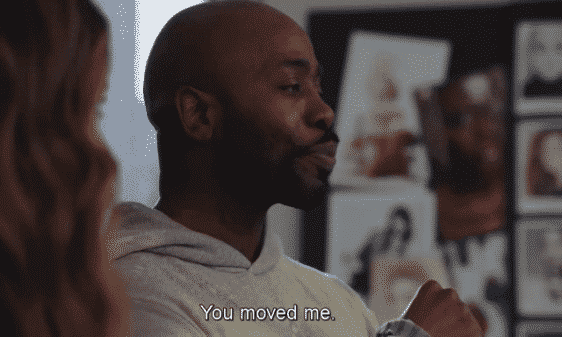 Oliver is in the final stretch of choosing his assistant and all he wants now is a mood board. One which helps him get to know his potential assistant – visually. Which seems like a cinch for Sutton but then she learns who her competition is. Someone who went to FIT. But, to complicate matters, Oliver is under the impression Sutton went to FIT and, against Jane’s advice, but going with Kat’s, she tries to live this lie.

However, after Richard reveals Sutton didn’t go to FIT by mistake, so comes her having to come clean. Seemingly jeopardizing the possibility of being promoted. But, not taking being knocked down as being knocked out, she decides to do her mood board over. Not make it in a FIT style but instead make it authentically her. Something which touches the part of Oliver which is just a small town boy from Oklahoma pursuing his dreams. Leading to him saying Sutton can give notice to Lauren for he is hiring her. I must admit I feel kind of mixed about Sutton’s promotion. On one hand, I’m happy for her and while it was a lateral move, it is a step in the right direction toward her dreams. Yet, on the other, with Sutton being the only one struggling and not in her dream job, her now working in the fashion department takes away some of her relatability. Especially with it being so early in the season so while her frustration was felt and made clear, at the same time we just got to know her. So while we verbally get how big this is, it seems like just yesterday that she was questioning if it was worth staying at Scarlet.

But with this move comes new challenges and new people. Oliver has already shown himself to be a character so that should be fun. Plus, I doubt we have seen the last of Lauren. Though, overall, I just hope we don’t lose Sutton’s working class attitude/ persona amongst the change. For that is what really makes me love her character. Which isn’t to say Jane probably doesn’t apply, but the way Jane is handled is so fish out of water who faces minor obstacles but surmounts them all. Sutton though, just with it taking her so long to get here, she was the one who you felt understood the struggle.