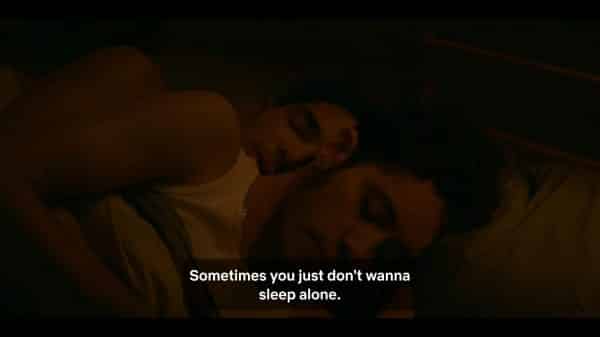 Unfortunately in life, to rebuild sometimes requires you to tear everything down to the foundation. “Next Level Sh*t” shows why.

With the help of Sam, Mary Ann ventures to find out who the man Anna was having flashbacks was and whether he has anything to deal with her selling the house. Alas, he has been dead for 15 years. However, with a very much alive grandson, it seems they may have found something to push Anna to tell the truth.

Brian is full on freaking out over Shawna deciding to head to New York and wanting space. Luckily, while Mary Ann he blames for everything, Wren is able to talk him down from having a panic attack. Making it seem Ben could have maybe used someone like Wren in his life too. For with him seemingly having no friends, all he has is Michael and with Michael moving into Harrison’s space that causes some friction.

Yet, Ben doesn’t end up reneging for his thoughts are Michael needs to live on his own and thinks the Harrison situation is him being punished. That leads to a bit of back and forth until Ben pushes an almost Mary Ann type of comment. One which pushes the idea that Michael is not only dependent on someone giving him assistance but the fact Michael is 54 and can’t afford his own apartment is childish. Which, for both, requires them to cool off.

But, if it is any consolation, to Michael anyway, things with Harrison are better than ever.

Shawna, with the discovery of Connie, ventures to know more about her and lands at her uncle’s doorstep. However, with him being a square compared to those she was raised by, as much as he provides pictures and information, like Connie being a flight attendant, the dad being unknown, and why Mary Ann was chosen as a godmother, he isn’t useful for much else. Especially that since of emptiness that has been eating away at Shawna.

So, to deal with those feelings, she looks up Inka and Eli who are already set up in New York, including a new third for sex. Thus creating an environment that makes Shawna feel replaceable and, strangely, heading off to Connecticut to see Mary Ann’s ex, Robert.

Leading us to Jake. With Margot no longer in his life, he tries to go to a bar and maybe meet new people. However, as we saw with the NDQ situation, there is also the issue of being gay for d*ck aka, not being attracted to trans men. Which is a bit of a problem for Jake since that’s what he is into now. So, when faced with no new options, what can a person do but head towards an old one? Hence Jake hitting up Flaco. However, it isn’t for sex, but more so intimacy.

The Loneliness of Shawna Hawkins

The only consistent storyline which can get to you might be Shawna’s. Despite having this community which loves her, we’re reminded how that community was made to compensate for a tragedy. Which, who knows, maybe some part of Shawna always knew? I mean, imagine being a child who was born the same day your mother died? Much less, knowing you are part of the reason your mother is dead.

But, mommy issues partly aside, can you just imagine Shawna’s state of mind where the community you grew up in isn’t enough. You meet your biological mom’s people and can’t connect with them, and the people you thought you connected with, they replace you with some dude like you’re nothing. It doesn’t explain how and why she is at Robert’s home – since she has barely, if ever, interacted with him, but who knows? Maybe that is her biological father.

The Search For Love & Acceptance

Alongside Shawna, Jake’s story has been one of the handful which had an emotional oomph to it. Granted, between cheating on Margot and the Linda side story things weren’t as strong as they could be. However, after the conversation about safe spaces, so comes the question of what does that look like for trans people? Especially in terms of dating?

Take Jake’s situation. He is attracted to men, but is a man who wasn’t born with a penis. Now, let’s factor in the following: Off the bat, even if there are a lot of gay men in SF, you have to deal with a fraction of the total population. Following that, you have to factor in Jake not being white. Luckily though, he looks enough like a twink for size and age to not shrink his pool even further. However, add in being trans, and it leaves you wondering how large is the pool of guys who can like him?

Add in we haven’t talked about sex yet. Which the show hasn’t touched on at all, for better or worse, and it really helps you understand how lonely life can be and why, among safe spaces, you can still find rejection. For after a certain point of limiting your pool to what can make you feel valid and lovable, you’re going to find very few, if any, people. At least if we’re talking about real-world interaction. Especially if, like Jake, you are kind of shy and not a huge extrovert.

The Possible End of Ben and Michael

Really looking over it, were these two ever really a cute couple? Yes, they had fun sexual moments, but outside of that all we got was Ben being kind of catty and making you question what he got out of his relationship with Michael? Plus, while I know the whole “Daddy” thing could be a preference, the age thing seemed to play too strong a role.

I say that based on Michael’s HIV status and that whole conversation about people of his generation not getting to experience the frivolity of young modern gay men. So when it comes to Ben, it felt like he was tapping into that to live vicariously. Also, a part of me wondered if it was also to be seen and feel attractive. For what happened between Harrison and Ben, in terms of Michael’s dating history, isn’t noted, nor does the show dive into how there is still a stigma when it comes to those who are HIV+, even with the existence of PrEP. Add in Michael seeming like the type who loves whoever gives him a consistent stream of affection, and it raises a red flag.

Then, when it comes to Ben, with us not learning a single thing about him, besides he works in tech and has a co-worker named Flaco, one can only assume he has a thing for older men. However, with him realizing Michael doesn’t have stability, good finances, and a lot of the things expected from older men, it kills the attraction. Making it seem almost shallow his interest in Michael for while he never asked for money or the benefits of assumed status, it seems that was part of the expectations.

The Loneliness of Shawna Hawkins - 89%

The Possible End of Ben and Michael - 75%