Just as things were looking up for Mary Ann and the twins, down for Shawna, and getting better for Michael and Anna, a significant discovery.

While DeDe played a larger role in past iterations of Tales of the City, in this version, she pretty much has been Mary Ann’s housing sponsor, and that’s it. However, in this episode, Jonathan and Jen con her into letting them stay in her guest house for a faux art project. One which doesn’t last more than a few days for Jen and Jonathan invite over influencers and with them ruining carpets and making Mateo work too hard, he forces DeDe to get rid of the twins.

Anna’s panic attack, which was touted as a heart attack, has everyone on edge and making Anna feel like she is being babysat. This, of course, is upsetting, but at a little party on the morning of her return, we discover a few things. Take Shawna and Mary Ann holding off on eating their croutons till the end – a strange mutual habit. Also, there is their relationship at the point where Shawna goes to hug Mary Ann. Which of course is a bit of a shock, but also welcomed to see by many.

As long predicted, Brian and Mary Ann end up having sex and reconciling to a point. It’s not that she and him are now talking about a relationship, but more so her accepting her part in why they fell apart has allowed them to move on. However, while they deal with their stuff and may potentially have a future, when it comes to Shawna? The few relationships she has recently cultivated seemingly are set on fire.

Claire, for example, is ghosting Shawna for she sees her as a distraction and it is pointed out that may be part of Shawna’s attraction to Claire is due to her being like Mary Ann – serious buzz kill. Though with Shawna noting, after Claire opening up in the last episode, maybe Claire is broken and that’s why things didn’t work, it seems she wants to make sure if those two cross paths, it won’t be cordial at all. If anything, as Claire documents queer spaces and lives in San Francisco, she’ll stay the hell away from places Shawna could be.

But, Claire isn’t the only one to set off Shawna. While spending quality time with Mary Ann, she discovers her birth certificate strangely in a box with old pictures. Because a legal document like that should be buried with old pictures that could get thrown about on a whim right? Anyway, with Shawna seeing Mary Ann isn’t her mom, Shawna’s world explodes, and so does Mary Ann’s to a point. 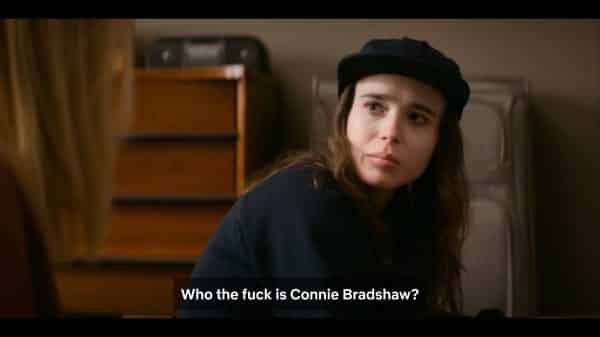 The Importance Of Inclusive, “Safe” Spaces

The idea of a “Safe Space” like so many things which have become part of the lexicon associated with millennials, has been made into a joke. However, as noted in the episode, a safe space is far more than a place without the likelihood of opposing opinions. It’s a place where you can possibly discover yourself, not feel like an outsider but one of many. Also, a place your behind can just be. You don’t have to code-switch, pass, or adapt to someone else’s comfort. Which for many is a luxury since some can’t even do that in their own home.

With Sam not being a con man, we’re back at square one, and I’m not even sure if Anna sent off the transfer of property yet. All we know is someone knows something, Anna doesn’t want it out, and so she’d give up her home, and the home to nearly half a dozen people, rather than speak the truth. Mind you, this is coming from a woman who may not necessarily be open and telling everyone her business but seems rather laissez-faire about most things. So, at this point, the reveal better be jaw-dropping to compensate for this build.

Is The DeDe Situation Supposed To Be Funny?

Between the white ally t-shirt and the stuff the twins put DeDe through to show her as a privileged white woman, I just can’t. Maybe it is because I’d rather see her connect with Margot more and seem like a person rather than comic relief? For though I know there are seasons of this which precedes the Netflix version that features DeDe, and likely flesh her out, I can’t say this season, thus far, has created that need to watch what came before.

One reason is, while there might be stuff only fans of the entire saga may know, you rarely ever feel left out. Secondly, while you have to appreciate the diversity of the queer experience, that luster is losing its polish from episode to episode. So the idea of venturing back leads you to question if maybe we would get something which seems fresher or, with the availability of queer media now, the older seasons would seem especially dated?