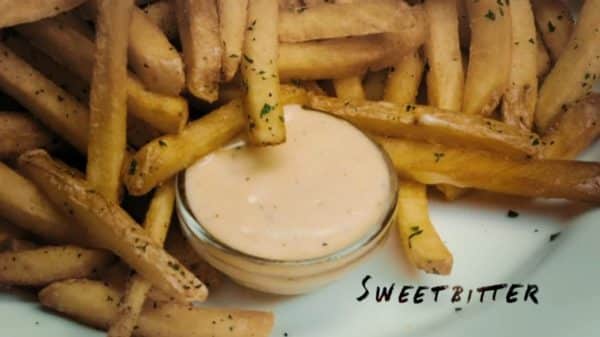 As the restaurant is thrown into disorder, the chaos coerces conversations between people who haven’t necessarily been on the best of terms lately.

Starting From The Bottom Shouldn’t Mean Life Will Be Hard: Howard, Santos

Santos, alongside most of the dishwashing and cleaning staff, come in early, are one of the last to leave and, unlike the front staff, don’t drink and eat much. Maybe take a to-go plate, but that’s it. With that in mind, Howard decides to take 5% from the front house, and none of the front staff is happy about that.

But they aren’t alone. Which some, like Sasha, sabotage the restaurant by hiding the forks, others like Manny make minor mistakes which forces Scott to send things back down the line. Making it so, while many are drinking, no one is eating. This leads Howard to go into a frenzy that has him rely on Will to keep people happy and, begrudgingly to a point, ask Simone to assist as well.

That leads to Simone discovering Manny being upset, just because he didn’t get a part of the pot when he was a dishwasher, and that leads to him being handled. As for Sasha? Tess, like Simone, doesn’t snitch but simply fixes the issue. Leading to the flow of things returning and Howard having to apologize for not just going off on the kitchen staff, but Santos when the 400 forks went missing.

But, aside from the madness, Jake finds himself having a minor rebellion with Tess. Mostly in the form of taking shots with her. However, it evolves to asking her to hang out but with her not wearing something which screams, “Ohio.” This leads to chatting with Ari who recommends a dress which could work as a nightgown and her convincing Tess to wear it bra-less.

Which is important to note since Tess isn’t a prude, but when it comes to sex and pleasure, she is still getting comfortable with what she likes and wants. She hasn’t progressed as quickly as she has done with her command over wine and food. So, her nipples showing, the feel of them rubbing directly against the fabric? It’s a new feeling. Add in Will having a bit of foreplay with her, after work, before the party he is supposed to bartend at, it’s ecstasy. However, him hitting the pause button, stringing her along, isn’t appreciated, so she goes home. Whether she goes home sexually frustrated or not? Well, that isn’t revealed.

What is, however, is that Howard might push Will to be management rather than Simone. An idea Will is willing to think about. As for Simone? Well, with a man named Martin coming to the restaurant, reminding Simone of yet another venture she didn’t take and instead relied on what’s comfortable, she finds Howard’s unpredictability disturbing. For, we’d submit, her giving up on her dreams of selling wine, being a writer, it is comforting if she can say she traded those dreams for stability. If Howard destroys that, she won’t be able to put the onus of why she is unhappy fully on him. She’ll have to think about her own complacency, and deal with she, like nearly everyone but Tess right now, being stagnant and too scared to make leaps. All because they found a comfortable routine.

So, all she asks of Howard is to go back to how things were and, if he doesn’t, she’ll leave. A threat that isn’t taken lightly yet Howard seems to love the idea of change too much to have Simone stop him. So we’ll see what ultimately comes of this.

Tess & Jake’s Back and Forth

One of the big things you have to appreciate about Sweetbitter, especially when it comes to Tess, is that her moments of growth, be it subtle or exponential, are rarely ever grand displays. Grand for her would be her kissing Sasha to force him to reveal where the forks were or, my favorite, after Jake teasing her, and then trying to control the situation, her walking away. It’s those moments, statements in a way, which make you love Tess since she isn’t grandeur speeches and things like that. She is an observer, someone who tests the waters, and when she discovers something she is like or capable of, she is firm about her decision – with a few exceptions.

Recognition of Santos & The Dishwashing Staff

While Santos, and most of the dishwashing staff, remain a bit of a mystery, you have to appreciate Howard, who is always looking about like he forgot his keys, taking note of them. For while I wouldn’t take this as a signal they’ll be featured more, even with this season having more episodes than the first, eight in all, there is hope.

The Delicate Balance Which Allows The Restaurant To Operate

With Sasha not being at work one day, how much Manny was able to disrupt things, we’re shown how delicate things are and how easily they can go wrong. Also, we’re reminded how much Howard leans on Simone, and even Will, to be his eyes and ears to correct things he can’t catch. Since, in the grand scheme of things, Howard is the boss, and while Will and Simone don’t have managerial titles, they do play such a role. Thus allowing them the kind of influence Howard can’t have if he wants to maintain boundaries.

The Lives Simone Could Have Had

Which is something Simone brings up to Tess about Martin. The idea that, as friendly as some customers are, the job isn’t about networking. While she doesn’t mention the possibility of being fired from being too familiar with guests, you can tell, likely as she experienced with Omar and others, she has been burned and found out things the hard way. Hence her often protecting Tess, or giving her a safe opportunity to fail, if not learn, whenever possible.

Recognition of Santos & The Dishwashing Staff - 80%

The Delicate Balance Which Allows The Restaurant To Operate - 85%

The Lives Simone Could Have Had - 86%