While initially detailing what life was like after Day Zero for Elizabeth and Clarke, ultimately, episode 5 is an origin story of a familiar face.

On the same flight, there was Clark, Elizabeth, Elizabeth, and Arthur’s son Tyler, and the man who represents the Museum of Civilization – Brian. However, at that time, he appeared to be Elizabeth’s agent. But, once Day Zero becomes serious, and the flight they’re on gets diverted from Chicago to Severn City, Michigan, he disappears, and things begin to go left. 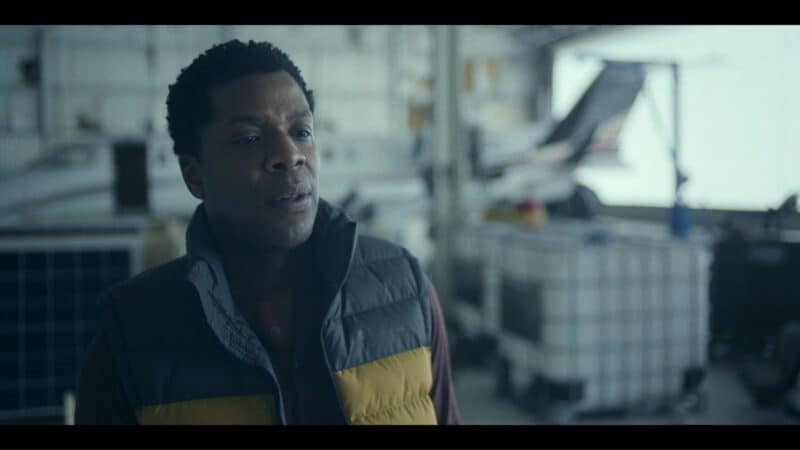 It isn’t immediately, but as Elizabeth pitches a fit about being stuck in an airport, and someone pretends to be Homeland Security to recruit people for a mostly female, few male sex cult, you can see people getting on edge. Thankfully, Clark steps up alongside former TSA agent Miles and even Elizabeth, and it seems they will lead their community, with Tyler seemingly posed to learn and potentially succeed them.

Now, what do they contribute? Well, thanks to his acting background, Clark’s leadership comes from his bravado and ability to connect with people. Miles’ contribution is being handy, knowing the airport, and getting the solar panels bought online to provide power, alongside the batteries of airplanes. Elizabeth? The idea is to use her star power and waning influence.

By day 12, it appears to be Christmas, and Elizabeth decides to have a heart-to-heart with Tyler about his dad. Initially, she makes it seem Arthur did try to be a good father, but with Arthur being a womanizer, her pain led to her impeding Arthur’s pursuit of a relationship with his son. She tries to solidify this lie by presenting Tyler with the Station Eleven book Miranda gave Arthur.

Now, it isn’t 100% clear why Elizabeth lied about Arthur trying to be a good dad, but you could fathom the point was to help him grieve, which he has done sporadically thus far. At least in a way that would seem normal to either Clark or Elizabeth. But, like many who read Miranda’s magnum opus, Tyler is taken in by its depiction of loneliness, human divide, grief, and the desire to start over. 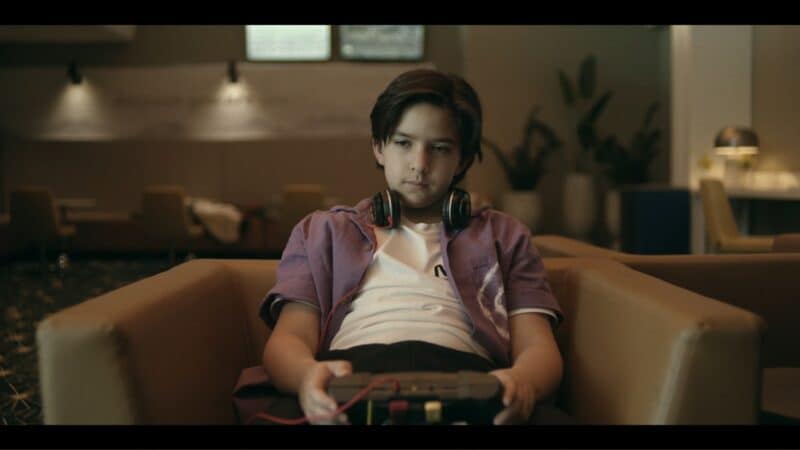 This is only compounded by potentially finding a survivor on a plane quarantined for 12 days, under the knowledge that there were multiple people infected. Tyler tries to bring the survivor into the community, and that man gets shot by Miles. With that, you can see any hope Tyler has died with the man, and when you add in the conversations Clark has with Elizabeth, or himself, regarding Tyler, and it seems the young man realizes the adults are the problem, at least those who are ruled by fear and hatred.

Hence, between Tyler touching the infected man, before said man was murdered, and then Elizabeth trying to keep her son from being killed, the two are forced to quarantine. This act has Tyler only pour himself deeper into Miranda’s graphic novel and be consumed by every word, phrase, and meaning he can take from it.

It seems with feeling hated, and maybe the feeling being mutual, Tyler thinks it would be best to fake his death and start over. So, from the plane which held all the infected, where we strangely see no bodies, Tyler orchestrates his death and has Miles, Clark, and Elizabeth think he burned up in the plane.

However, the truth is he didn’t, and he becomes the man we know as David, “The Prophet.”

Things make far more sense with David now. He was a child who wasn’t necessarily loved or cared for, with both of his parents putting others, and their careers, ahead of him. Also, when it comes to Kirsten, who is to say he wasn’t aware of his father’s protégé, who received all the time which should have belonged to him? Hence him hunting her down and wanting to destroy all she holds dear? Especially rid the world of acting and Shakesphere, since that also triggers his daddy issues?

It all makes David far more fascinating and considering, even as a child, he was able to manipulate the innocence and idealization of children? It makes all the more sense how he has mastered such a skill as an adult and can even make children raised by professors into tools for destruction.

Lack Of Interest In Most Of The Characters 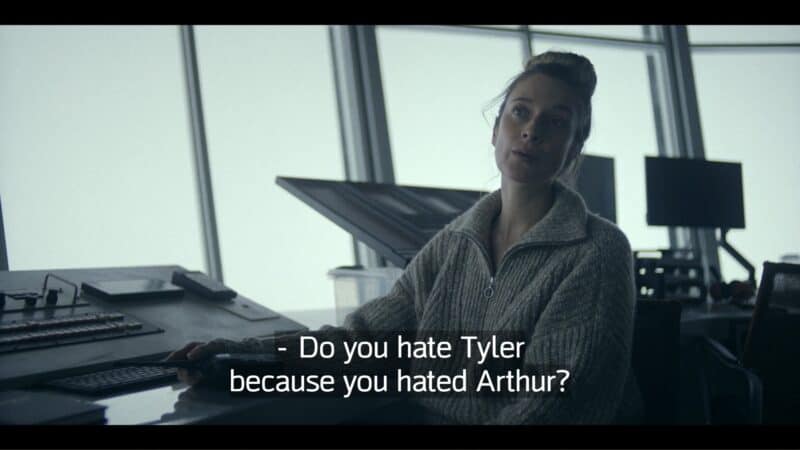 The problem with Clark and Elizabeth is that they are characters who exist in Arthur’s shadow, and this episode doesn’t break them out of that. Yes, we learn Clark works for Goldman Sachs and can still captivate an audience, but Elizabeth doesn’t get to have a claim to a life outside Arthur and seems hell-bent on dragging Clark into Arthur’s shadow. Which, after a certain point, she does, as does the writer of the episode.

We’re basically given the idea that Clark hated Arthur yet deeply loved him, and Clark’s desire to connect with Tyler is an extension of that love, even though Tyler seems to barely know Clark at all. Thus, neither character gets to be, firmly, their own person, and ultimately only builds up Arthur’s charm and begins developing what Tyler inherited but, without the same needs or insecurities as his father, has his charisma unbridled and going down a dark path. 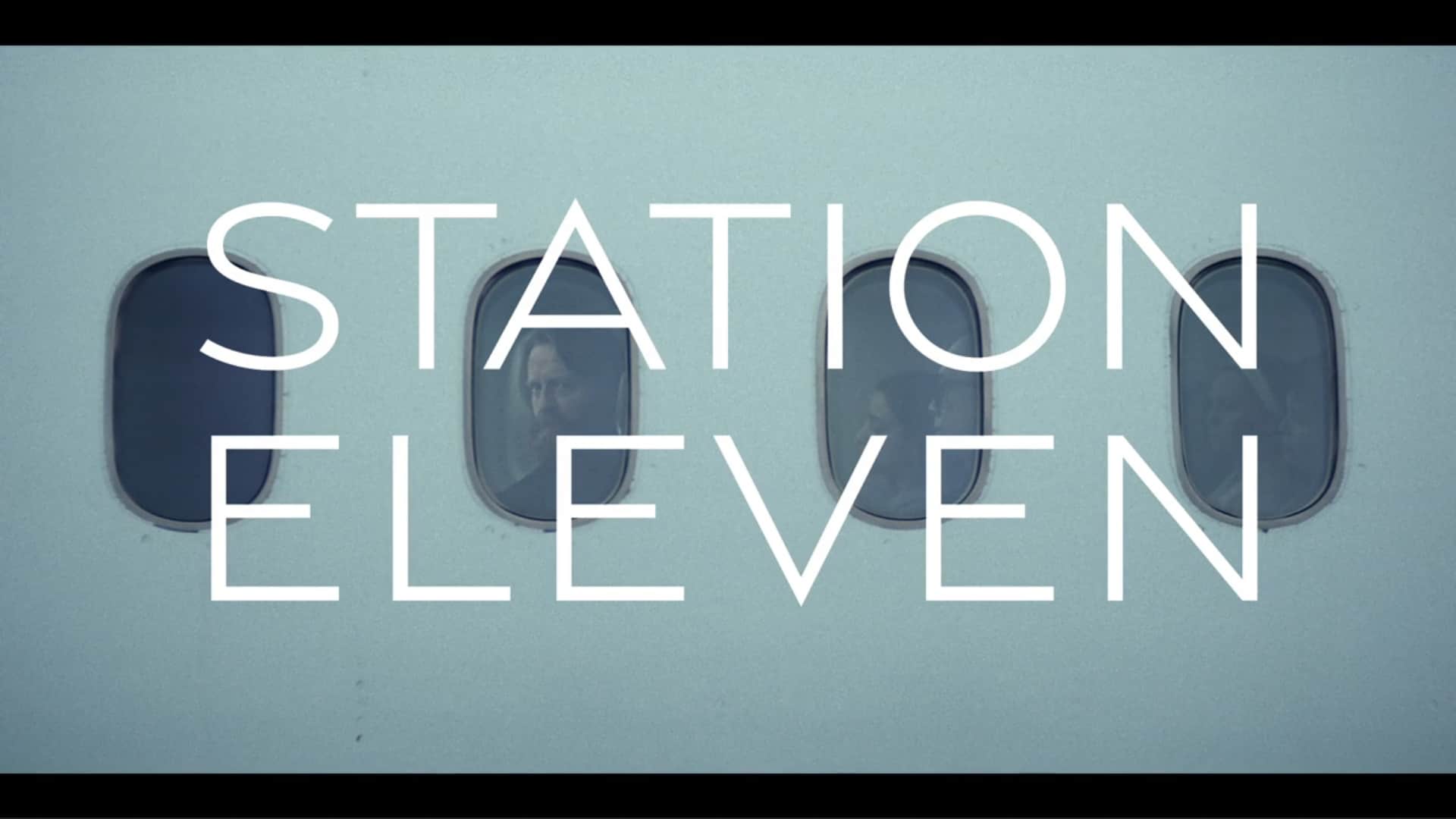 Station Eleven: Season 1/ Episode 5 “The Severn City Airport” – Recap/ Review (with Spoilers)
Trajectory: Plateau
While Elizabeth and Clark drive no interest towards their characters, they help build up David and make him far more than a pied piper with their sacrifice.
Highlights
David's Origin Story
Disputable
Lack Of Interest In Most Of The Characters
78