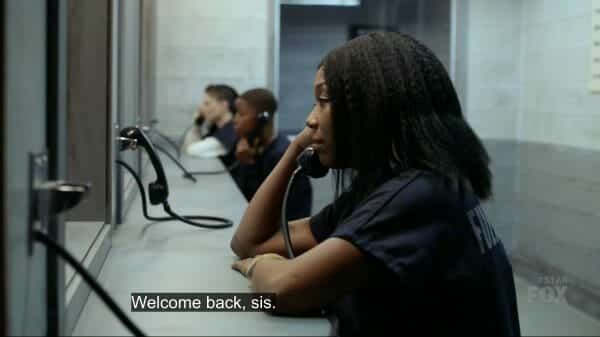 With the mid-season finale next week, Star is clearly setting us up to be in our feelings.

Torn Between My Future & Past: Simone, Nina, Angel

Angel done smuggled his way back into America and, well Simone wasn’t expecting it. After all, she has begun the process of moving on, getting divorced, and going back to seeing what it is like to be with a woman. Yet, as much as she likes Nina, Angel is her first love. Heck, he is still legally her husband and that complicates things. Especially since Nina is doing so much for her, kisses her, and let’s not forget Simone isn’t even 20 yet. Never mind, for most of her life, the only one who loved her like these two was Star and the trauma of Karen’s death sits in the back of her head somewhere.

A part of me, the pessimistic side, thinks Simone may try to keep both Nina and Angel and play them a bit. Yet, it’s hard to not understand why she would do that. With a life which includes being constantly molested, having to have a wall up, and not knowing where you may end up, having two people so heavily invested in you had to be hard. Especially since they aren’t just invested in having access to your body, your feelings, but also your career.

Angel is a musician, a great duet partner, and the first man in Simone’s life who treated her like a human being. The first who she felt comfortable being vulnerable with, and for that she’ll be forever thankful. But, I can’t say she is on some Ariana Grande, “Thank you, next” type stuff just yet. For there is the need to question if she does next him, can they still be friends? He paid a lot of money, maybe lost a kidney, just to get back to her. All that just for her. This girl who never really had much to offer to him besides an ear, some comfort, and affection. The guilt is probably insurmountable.

Yet, then there is Nina. She is kind of the best of both worlds for Simone. She has that sort of maternal vibe Ayanna had but also that ability to be as affectionate as Angel. Yeah, she’d be trading in the complication of her partner’s citizenship being an issue with her dating a married woman but, let’s be real. Whether Simone is pan, bi, demi, or one of the others, she has leaned more towards women than men. So while she may love Angel, there is the need to question if it may have all been timing. Which, need I remind you, originally Angel approached Simone to mess with her head so don’t take all this lovey-dovey stuff without remembering the origins.

Both Noah and Alex are going through it. Alex due to trauma, as usual, but now anxiety is also kicking her ass. As for Noah? Well, being robbed got to him and add on the pressure Maurice has on him and while he may not be experiencing the same anxiety Alex is, there is a certain understanding between them. Hence when he checks on her, old feelings get riled up. After all, he gets her in ways Derek doesn’t. However, with Noah having a girl, it is bad timing as it was before. Yet, there seems to be a door left cracked for Nalex in the future.

Leading to the topic of Bobby. With him reconciling with his son, Noah even asking him to be his manager, this intrudes on Maurice’s ability to manipulate Noah’s mind and career. Something Bobby is trying to put a stop to. As that goes on, so does Bobby trying to make up for lost time with Miss Bruce who is mostly in bliss. Them not being out and open bothers them a bit, but with it being who knows how long since they were boo’d up, they seem to just be enjoying it for now.

I’m so glad Miss Bruce is flourishing right now. They are handling music careers, finding love, taking note of what Carlotta gave them and adapting it to how they talk. For example, Alex and Miss Bruce’s scene when Miss Bruce talks about Alex not slowing down since she set foot in Atlanta. But, with all that said, we need some flashbacks. They haven’t happened in some time but a Miss Bruce episode seems necessary and IT BETTER NOT come due to their life being threatened. For with Bobby taking a gun off of Noah, and who knows where that gun may end up, a bullet better not hit Miss Bruce is all I’m saying.

Miss Bruce aside, we are coming up on the mid-season finale and with that means it is time to start cleaning up. This show, as fans who have been watching since the beginning know, uses anything with the word “finale” in it to kill off and write off characters. Maurice needs to be one of them. Another is named Xander for reasons below.

Star meets Jackson’s mom Rebecca who is bipolar. Which comes off as a bit of a shock but, let’s take note Jackson has been trying his best to win Star over all this time. Meaning stuff like having a mom who is bipolar? Also, a mom who kind of looks like Star, if we’re being honest, doesn’t seem like a good idea when you’re courting someone with a wall up. But, with Star already letting the d*** touch the heart, she seems ready to roll with the punches. After all, she is pregnant so she don’t have a choice. Much less, her parents are dead so Jackson’s mom is the only grandparent her kid will have.

Speaking of parents, Carlotta and Cassie’s dad is introduced this episode. But, before we meet him, Carlotta visits Cassie in jail, sees her during her arraignment, and tries to convince her, despite all that went down before she left, she is still her sister. However, it takes some time for that to get through Cassie’s thick ass head. Why? Well, Cassie’s situation is similar to Simone’s in a way. The difference being, Xander is no Angel – pun intended. He is the reason she dropped out of school, took on the family business, and is in the state she is in thinking it is because she is ride or die. No boo, you just a damn fool.

Something she realizes as Carlotta breaks down that any reason Cassie might have been jealous, like how much time their dad spent with Carlotta, isn’t worth being jealous about. He molested her and she took that on so he wouldn’t hurt Cassie. Leading to, after therapy and revealing that to Cassie, her confronting her dad. Someone who acts like he has no idea what the hell she is talking about.

As for Cassie? With that information she breaks up with Xander and he threatens her life. Because, you know, that whole “These calls are being monitored and recorded” seemingly is just a lie when it comes to prison. Much less, those guards, seemingly they are paying 0 attention to the person in a jumpsuit talking to someone who is clearly riling them up.

With Xander and Cassie threatening each other, and the show faking us out with the Cassie and Carlotta standoff, I need her to kill Xander. Yes, it may send her to prison for real and possibly mean writing off the character for a while, but what a better way to go out? After all, what else can she really do on this show? Partner up with Carlotta and start their own label? It’s an idea but with Cassie’s past and Carlotta’s outburst, who is going to finance starting that up? Add in Gravity Media has contracts with the members of Take 3 and that would mean buying them out or coming up with new cast members. The show, at this point, has just gotten to a point of not feeling bloated. We don’t need new people but, as seen with Miss Bruce, old favorites being developed. Like Miss Ruby! Derek’s storyline revolves around a woman who has been missing for ages.

As for the Rebecca situation? It seems necessary. While Carlotta has been a maternal figure to Star, and Simone, there is still a past and issues there. Issues that haven’t been brought up in a long time, but with this show all it takes is one good argument. So, with Rebecca, there is this chance to really tap into having a family not just by choice but blood relation. It may even trigger more conversations about mental health on this show. For, thus far, while Carlotta has been going to therapy, Simone has been waving that flag forever, and Alex is dealing with stuff too, we haven’t dealt a lot with people with actual diagnosis.

So, with that in mind, Rebecca may not be just someone for Star to spar with but may open up some thoughts and idea in her. Especially since Rebecca thinks she has clocked Star and who she is. Meaning she is going to be fun for Star, and us viewers, in more ways than one.