In what some may find a triggering episode, Bridgette seeks to get to the root of some of her problems: the father who molested her – repeatedly.

Previous Recap: Episode 7 “Family-Sized Popcorn & a Can of Wine” 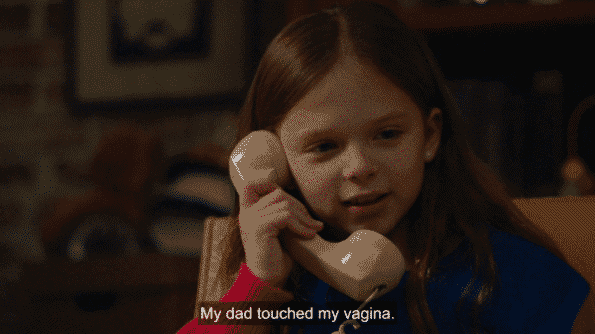 Around the time Bridgette was 6 or 7, she was repeatedly molested by her father. Someone who, with a mom like Tutu, was her favorite and yet for some reason, he touched her inappropriately and seemingly moved to South America. Now, to help deal with this, since she herself was a wreck over this, Tutu had Bridgette go to therapy. Something she is glad she did for she too went through stuff and learning what happened to her kid, it took her out for nearly a year.

But look at Bridgette. Yeah, she is a bit of a mess, but unlike Tutu, she is the kind of mess which can still go out and face the world. Meanwhile, Tutu can’t help but lash out and has emotions which are a bit all over the place. And yeah, you may wish to ask, “If you knew what happened, why didn’t you call the cops?” Well, the rules which apply for grown women also apply to a child. Meaning, Bridgette would have to recall all that happened, her dad would have the right to defend himself, and all of this would have not just been taxing on Tutu, who was beside herself, but also Bridgette. Someone who, based on her therapy sessions, perhaps didn’t fully understood, yet, what happened to her.

Bridge’s life is actually, kind of, coming together. Because of either Nelson or Kit-Kat, she has a job at a collections agency. One with a desk and all, even free food every now and then. Making it so, she can finally leave Eliza and Regina’s couch! Which you know Regina is happy about, she low-key can’t stand Bridgette. Likes playing with Larry though, he’s cool.

However, one bad thing which comes from this new job is Kit-Kat and a co-worker setting up a Tinder profile for Bridgette and in her swiping, she sees a guy who looks like her dad. Someone named Richard who is 62 and says he is a lawyer. This messes Bridgette’s mind up royally. After all, Bridgette, like most screwed up protagonist on TV, is more so looking to avoid the root of her issues than face them head on and in the case of her dad, that is an issue in which there were multiple failings – in hindsight.

Yes, Tutu did make sure Bridgette got therapy, which considering the woman we know you have to wonder if that was her idea or someone else’s. However, at Bridgette’s current age, she wants more. She wants justice and she wants to, as we have seen since the dude tried to finger her under the table, autonomy, and justice. 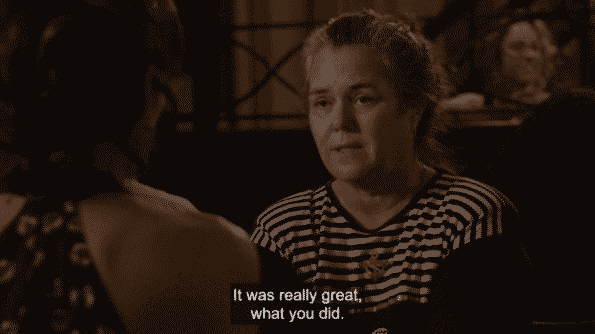 Yet, Rome wasn’t built in a day so Bridgette recruits Eliza to come on the date, convinces Tutu to come and while Nelson, originally, came to the bar to confront Bridgette about a Rafi issue, she ends up supporting her as well. Unfortunately for Bridgette though, Richard isn’t her father. Tutu confirms that. Yet, for 16-year-old Bridgette, while this man may not have been her father, perhaps saying the words out loud of how she felt hurt, used, and betrayed, may help begin the healing process.

So that way, she won’t need Casey to give her his D to help distract her from her issues.

Smilf never really seemed like it was building up to Bridgette confronting her dad. Yes, she got assaulted and her dad got brought up, once or twice, but nothing pushed the idea this would be our climax. Yet, when you think about it, it’s for the best in a way. If only because there has to be a question of what happened to Bridgette between this adorable 6 to 7-year-old kid to this adult woman who can stand up for herself, but more often than not seems kind of frail.

Take the way she handles someone saying they love her. Her response is this weird mix of obligatory yet hopeful in a way. Making you wonder, as we look back on all that Bridgette has said and done, how much has her dad molesting her maybe affected her interactions with people? Like, take her choosing Rafi as a boyfriend and most of the men she deals with. Could it be she chose them because she felt, if need be, she could take them or even berate them and assert some kind of dominance? Is that why she has sex with a kid like Casey? Because she is always in power whenever they hook up?

I mean, I am not trying to make those series of incidents what defines Bridgette. However, between the confirmed physical abuse from her dad and the mental, emotional, and maybe past physical abuse from Tutu, it is hard to not take note of the cracks in Bridgette’s foundation. Much less wonder, as the seasons go on, she crafts a new dream, and Larry gets older, how will she handle her baggage?

Tutu As a Mother

You know, a lot of parents, especially those with less than a stellar record, according to their children, will often say, “I did the best that I could.” Which, often times, is felt like it wasn’t enough. However, after spending 8 episodes with Tutu, while still a piece of work, you have to give her props. Like Bridgette tries to with Larry, Tutu tried to give Bridgette the tools she didn’t have so she could function in a more acceptable way. So that whatever regrets or demons she’d eventually face, they wouldn’t break her. Yes, Bridgette might be a bit weary and tired, but we’ve seen there is still a fighter in here. There is a bark paired with her bite. Unlike Tutu who is struggling, possibly trudging, through life and lashes out at Bridgette for doing what she has become afraid to even discuss, never mind attempt.

I’m not sure whether Smilf is a comedy with dramatic elements or a drama with comedic elements, but Nelson comment to Eliza asking if she was molested too made me roll my eyes. I get Nelson isn’t all there but come on now.

Rafi Brushed Under The Rug

Honestly, I just feel like the ball got dropped with Rafi. He clearly is picking up his old habits, which Bridgette can see; he likely got kicked out of sober living; is rushing things, low-key, with Nelson; and we still aren’t fully sure how his relationship with his mom may, or may not have, messed him up. The nicest way I could put things when it comes to Rafi is that the foundation has been set for later development but my what a shoddy job was done. Especially in terms of consistency.