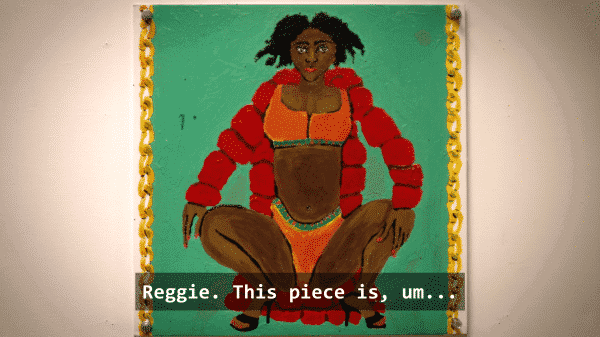 In some kind of motel, Shemmeka gets her injections. Which sort of begins what low-key becomes a preachy episode which if it wasn’t for Raqueletta Moss, would seem to rely heavily on respectability politics.

As we are aware, Cheryl and Jamie are separated and still living in the same home. What we didn’t know though is they also have a son together: Virgil. Someone who, like Cheryl, is light enough to pass for white. Which has caused him some issues. There seems to be a desire to asset and be able to claim his blackness, but with only his parents seemingly validating it, he creates what could be considered a slightly disturbing video. One in which white kids are using the N-word, and have it on their shirts, while wearing Blackface. Meanwhile, Virgil has his face painted white.

It is all very weird but Virgil’s issues at school do open up more of Jamie’s private life to us. Not just in the form of showing him as a good dad, one which his son is starting to develop abandonment issues from, but also we get to peer inside his relationship with Cheryl. Someone who seemingly can’t get past this, as Jamie says, “Double Consciousness.” Something which also can be referred to as code-switching.

For the way Cheryl talks, she is basically bougie. She isn’t fond of Jamie’s past growing up in the projects and doesn’t want his upbringing to affect her son. Not their son, she doesn’t use shared possessive words. She claims total ownership. And with the way she harps on Jamie’s past, we begin to see what Jamie likes Nola.

In my mind, Cheryl represented all that it meant to be out of the hood and have status – to Jamie. She is well connected, put together, light-skinned, and from a good family. A complete opposite of what Jamie had growing up. Yet, at the same time, she forces Jamie, or tries to at least, make him ashamed of the neighborhood he grew up in and the people. All of which, mind you, Jamie doesn’t necessarily relish the memories of. But those memories are a part of him. They are the cement blocks which pushed him to be the kind of man he has become. Someone who demanded and got respect and hustled his way into a very lucrative position. The kind which, combined with Cheryl’s income, allows them to send their son to a school which has the tuition of what many don’t even make within a year ($45,000).

But then there is Nola. With him, there is no code-switching because she speaks both languages Jamie does. She can speak his hood vernacular just as much as break out her thesaurus. Sort of like how Nola felt when it came to Opal, it seems that is how Jamie feels with Nola. With her, there is no ego, there is no walking on ice and choosing your words. Well, as of late, yeah, but I get the feeling that formerly there wasn’t. And you know, when you work in a corporate or conservative environment all day, coming home to someone who seems to live and breathe that culture is stifling. So to be with Nola in her bohemian lifestyle of art and creativity, being able to talk in ebonics and leave your “Yes’ums” at work, it sounds like paradise.

Despite her first day stumble, Nola recovers nicely when it comes to teaching art at Harriet Tubman Middle School. However, when Reggie draws a picture of herself in the same fashion as Lil’ Kim in her “Hardcore” album cover, red flags are raised. The kind which pushes Nola to talk to Reggie and while Reggie tries to make it clear she isn’t about that life, or her life isn’t filled with sexual abuse, at the same time, her interpretation of “Ho” culture seems low-key troubling. For while, if she was older, parts of her argument and how Nicki Minaj and Amber Rose exhibit “Ho” behavior for money would be fine. However, a 13-year-old talking as she does is triggering.

Especially for one Raqueletta Moss. Someone who, when she was Reggie’s age, was put into sex work by her momma for drugs. And with her confession comes a lot of explanation for why she is how she is. Such as why she is so committed to talking in third person – It’s a coping mechanism. Putting a different spin on the idea of “Double Consciousness.” For Ms. Moss knows and acknowledges what has happened in the past. Yet, she doesn’t let what happened to that little girl affect who she is now. And while that little girl is still very much a part of her and she owns her story, she doesn’t let that story decide who Raqueletta Moss is or how she should be defined.

Her talking in third person, that is how Raqueletta Moss reclaims her body, takes back her autonomy and finds her strength.

Sometimes I feel like a walking time bomb of undetonated memories.

You have to appreciate how a lot of things get set up and then knocked out of the park with She’s Gotta Have It. Almost to the point where Nola seems to be just a medium, a Trojan Horse if you will, to women like Opal, Shemekka, and now Raqueletta Moss. Women who don’t often get the type of time and development they deserve. Like Ms. Moss. When we met her in the last episode, she seemed like straight up comic relief. Especially with her talking in third person. However, when she broke down why she does that and told her story, I must admit I got a bit choked up. For while her story isn’t new, heck I grew up with girls who were in similar situations, I don’t know what happened to those girls.

And I’m sure there are people who know of or are Raqueletta Moss. So for them to see themselves, or get their own version of “It Gets Better” means something I don’t think everyone who watches this may get. For unlike a lot of dramas, it seems the people Spike employed to write this show which, outside of this episode, have thus far been women, were pouring their stories into Nola and everyone else. Maybe not their own life story, but the women they saw, knew, or the ones they never got to see. Either in their life, media or, like me, after knowing of them they just never saw them again. So perhaps, in some way, Raqueletta Moss is wishful thinking. A girl turned woman who may be suffering from trauma, but made it. She made it and went back in, like Harriet Tubman (hence why that is probably the name of the school), and is making sure others can make it too.

When it comes to stuff like “Double Consciousness,” being twice as good, and things of that nature, these are the kinds of things young people of color, especially Black, have to learn and deal with. But when it came out of Virgil, it hit harder than expected. Maybe it is because we don’t often see or hear Black kids talks that way. Much less, with Virgil being “High Yellow” he can pass for white. So when he expresses lacking validation in his blackness and trying to navigate that private school he is sent to, it is hard to not feel bad for the kid.

I mean, granted, it isn’t like he is living the life Jamie did or Reggie is, but it really shows how money doesn’t buy Black people out of all their problems. It may provide opportunities that seem like fantasy when working class or poor, but it doesn’t mean people disregard your skin tone. It doesn’t buy you respect. Also, it doesn’t allow you any real sense of complacency. For as shown by none of the other kids’ parents taking offense, you’re on your own and while there maybe this idea that things are somewhat different, as noted with the church shooting, you’d be a fool to stay in that mindset too long.

And with that said, you can see a bit of Virgil’s pain. His normal comes from his father. Someone who doesn’t shy away from some of the negative aspects of being Black. He doesn’t, for a lack of better term, “whitewash” what is part of his known experience. One which is more easy for Virgil to connect to than what his mother presents. Yet, isn’t really accessible to him. Making his father seemingly on the way out, like someone destroying the bridge which leads to what feels like home.

There is this desire to say they are building up to something with Shemekka but it’s hard to say what. Yet, surely they aren’t stringing her along just for the hell of it right? Surely there is more to Shemekka than her butt insecurity and her trying to make more money dancing right? I ask this because with what we’ve seen out of a lot of characters, it seems like Shemekka is overdue for her moment. Unless her opening up to Nola was supposed to be that moment.