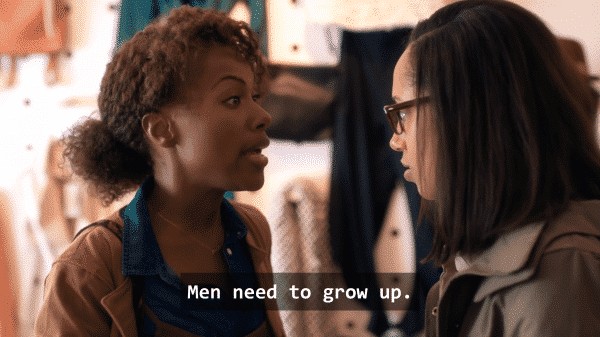 It’s time for a test. A test to see if the men in Nola’s life can handle a little black dress and all the power it gives Nola. The kind men seem to want to take away.

Seeing the Doctor and Buying The Dress: Clo, Nola

With being assaulted physically and her art defaced, Nola has come to a point where Clo’s idea of seeing her doctor friend, Dr. Jamison, isn’t a horrible idea. I mean, she is a sister so she should get it right? No need to explain how Black women feel about certain things or any of the walls which make it hard to reach out. And, for the most part, the chat does her well. So well she decides to buy a $500+ dress while shopping with Clo to take back some control over her life. Even if it may threaten her rent payment. 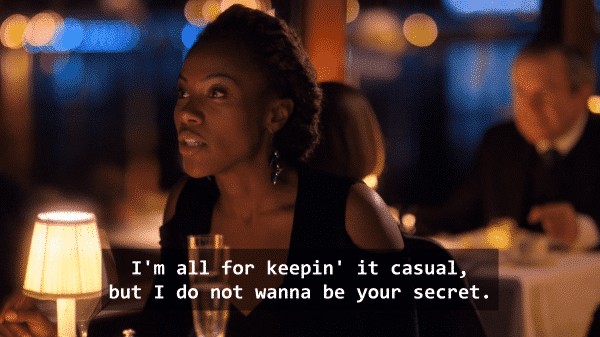 As has been established, Nola can be very touchy about certain subjects, and she all the right to! She is giving her valuable time and energy to these men so it isn’t too much to ask for respect. Especially since there are times when it seems all they want is to do what it takes for some ass. Like when it comes to Jamie. The one who in the movie was the clear favorite now is trying to downplay his situation with his wife. When partners from his job see him and Nola, he tries to keep their situation private and as he talks about her dress in such a way that it makes her feel like a sex object, off her goes.

The same goes for Greer. He loves the dress, adores the fabric and how it looks on Nola. However, with him repeatedly taking her picture, and not stopping when she asks him to, so comes the vibe that he doesn’t respect her autonomy. As if she is like the models he shoots where she is trying to sell something and that isn’t the case at all. Hell, we don’t even see Nola sell art or put up art that looks like her. So why would she want Greer to go as far as he does?

Then there is Mars. As usual, Mars comes off like the best option with him gassing her up and really admiring the look of the dress. Yet, he messes up too. Like the other guys, the way he talks makes her feel as if she has no right to walk around in a little black dress without expecting attention. The kind of attention which would be a threat to her. Attention that perhaps only these guys should have. And so she makes it seem, with each and every one, that she needs a break from them.

Leaving them all forced to reflect in their own ways. Greer doesn’t do a damn thing but edit the photos he took of Nola and reminisce. Jamie apologizes by text and Mars? Well, with Nola entering in Shemekka’s portrait, he just prays to Michael Jordan that she wins. As I feel has been said before, considering all that happens, all the drama, we usually see in TV shows, the fact more people, in general, aren’t shown to be in therapy is amazing. But when it comes to Black folks in general, especially Black women who, as the often lead of Black shows, usually have mountains of issues to keep viewers interested, it is a surprise more aren’t in therapy. Granted, there is some history behind that in the Black community, but it is 2017. And as much as people may talk about being woke, feminist, and a slew of other adjectives many claim but don’t truly live by, the need for self-reflection is strong.

Which made Nola going to see Dr. Jamison a good thing. Now, whether she’ll go back or not we’ll learn in later episodes. In the movie we saw her go once, didn’t like that she got an opinion instead of validation, and decided that wasn’t for her. But since Dr. Jamison provided some validation, here is hoping that will allow Nola to see when she advises her on some things, it isn’t a personal attack.

There is a reason sisterhood, womanhood, is so important. Be it Clo noting the dress looked good, but was expensive, or Miss Ella tipping her crown at a young queen. In both cases, Nola got what she wanted out of these guys she enjoys, but keep letting her down.

I mean, of the three, Mars was the one who perhaps did the least damage, but he still ain’t ****. And there being levels to that statement I felt was important to throw out there. We got Jamie who may care for Nola, certainly seems to like sleeping with her, but as much as he calls himself relationship oriented, his actions don’t match his words. Now, who knows if his partners know about his separation or if he is even comfortable talking about it. But no one wants to feel like a secret. Sure as hell not Nola Darling.

Then with Greer, while his situation may seem innocent, you got to remember Nola is trying to regain control over her life. As spoken about to Dr. Jamison, her body and her art were attacked. Two of the most important things to Nola. So for Greer to take away her ability to say no and it mean something? For him to make her feel uncomfortable and like a model who needs to suck it up because she is doing a job she is obligated to do? No Bueno, no mas, adios. 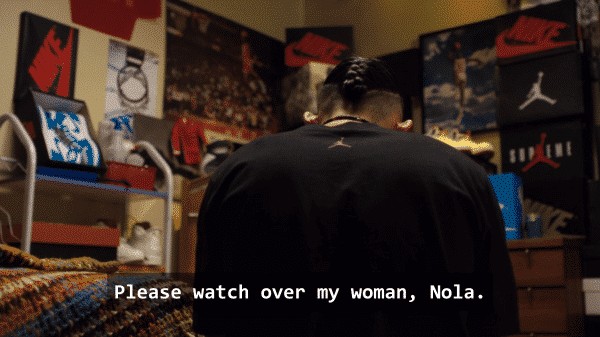 And lastly, with my favorite (which I note so the bias isn’t hidden at all), Mars? While he gets props for the tickets to the concert, nearly finding the guy who defaced Nola’s art, and generally being cool about Nola in the dress, he slips up too. If only because, like Jamie, he makes it seem her wearing that dress is the cause of anything that happens to her vs. toxic masculinity and men’s sense of entitlement.

But, with that said, I really hope Opal, or an Opal type, comes into play. If only because that dynamic, being catcalled or made uncomfortable by another woman, doesn’t get exhibited much in mainstream media. So that would be something different to see.