Maniac ultimately seems like a good book that was adapted into a lopsided production that relied heavily on its female lead as it let its male lead drown.

In a world that has robots roaming around but computers from the 80s, a young woman named Annie is dealing with the grief caused by her part in her sister, Ellie’s, death. Something he has dealt with by abusing what is known as the Phase A pill of a pharmaceutical trial ran by the Neberdine Pharmaceutical and Biotech company. However, with her supplier, the son of Dr. Robert, a freebasing addict, no longer able to siphon pills from his dad, Annie gets creative. Through attempted blackmail, she finds a way into the ULP Trial, the official name for the study, and thus gains access to the Phase A pill. Problem is, she finds herself experiencing more than the joys of the A pill but also the B and C which follows.

Luckily for her, a young man named Owen, the black sheep of his family, someone who needs the money which would come from the trial, often joins her in this vivid dreams. Often times with them in some sort of relationship. But, like Annie, Owen has issues he is trying to deal with. For on top of having schizophrenia, and the delusions which come with that, he has a long-held issues thanks to a young woman named Olivia.

Thus giving us a show in which these two, alongside a handful of others, find themselves addressing the root of their problems, breaking down the walls they put up, and confronting the issue directly. All in the attempt of, over the course of three days, doing what would take a therapist years.

Emma Stone, no matter if she is Annie, Linda, Ruth, whoever, is the selling point of this show. Not just because of Stone’s presence, but because Somerville, and the rest of the writing team, pour more time and development into Annie’s character than anyone else. Her journey which deals with what happened to Ellie, Garner’s character, will bring you to tears. And even when the focus isn’t on Annie’s relationship with Ellie, and Stone is playing off Hill, she is the driving force.

Whether it is as Linda and they are stealing and trying to deliver a lemur, Stone playing a spy trying to get Hill’s character out of NATO, or a con artist helping him to steal the missing chapter of Don Quixote

, she is the clearly defined hook. But, revisiting the topic of Ellie, Stone shines the most when her scene partner is Garner. For whether it is establishing the root of Annie’s issues, through one of the last times Annie and Ellie saw each other, episode 7 & 8 featuring her and Ellie as elves, or a tear-jerking scene in episode 9, they create the heart and soul of the show. Making it where Maniac is more than the weirdness of the doctors and their relationships with one another or Owen who seemingly has little faith in the trial and process. We get this beautiful story about a young woman’s grief and dealing with the one person she was closest with, pushing her away. The main issue with Owen is that if you put him side by side with Annie, he doesn’t come off as the straight man of a comedic duo. He comes off like dead weight. This is despite a ton of information being dropped about him in episode one which should bring intrigue. Be it his odd family, his delusions, or even this crush he has on his brother’s fiancée. Not to forget, there is also him having a psychotic episode not too long before the events of the series.

However, similar to Will Smith in After Earth

, the energy and charisma that made Hill famous, that is completely stripped from him when he plays Owen. Making it where, with Owen being the central focus of episode one, unless you are a big fan of  Emma Stone, or wish to see Julia Garner, Sally Fields, or someone else, I could imagine you dropping this show. For with episode 1 solely focusing on Owen, presenting no real hook, even as the madness comes from left and right, it makes this seem very niche. I’m talking indie movie which gets released in NYC/LA for a few weeks then rarely is spoken of again niche.

But then, to add onto that problem, Owen doesn’t truly try to deal with his issues. Unlike Annie, when it comes to identifying his problem, removing roadblocks, and confronting them, there is always hesitation and, when all is said and done, very little progress was made. We don’t see him address Jed or Grimsson really to the point he’d be able to in reality. Also, it doesn’t take on his complicated relationship with his parents. Then, when it comes to Olivia, he more so makes excuses for himself and lives out some fantasy, than really holds himself accountable for why that relationship went to hell.

And while it should be noted that he says he can’t be fixed, and only did the trial for money, it makes it difficult to enjoy his story with Annie going on this big emotional journey.

How Annie Got Into The Trial 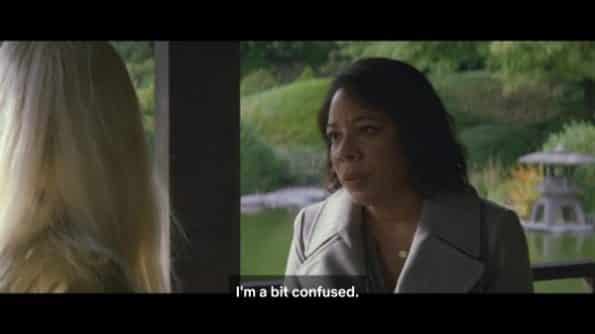 While I have no doubt you’ll love Annie, her being able to blackmail Patricia and getting into the trial? Well, my bad, Annie attempting to blackmail Patricia, backing down from the idea, and then Patricia deciding to help Annie despite of – that may hang you up a little bit. If only because it doesn’t make one lick of sense that Patricia would do that. I mean, Annie walks away, talks about calling the blackmail off, and Patricia pursues her and wants to know why she wanted to do it and feels sorry for someone who clearly is an addict of pills she should have never gotten a hold of. It makes no sense.

Anyone Who Is A Doctor The doctors of Maniac are a mixed bunch. On one hand, it is easy to compare the state of Dr. Fujita and Owen, who both seem like they are on different dosages of Ritalin to function through life. Alongside her actually pursuing getting better vs. Owen just wanting to survive. And it is in comparing Owen and Annie’s story to the doctors where you may gain interest. However, I can’t make promises due to Dr. Robert having no real development and Dr. James’ issues with Dr. Gertie perhaps being meant to be funny. At least in terms of the many, damn near, nervous breakdowns the man has.

But hey, with most of the people of color on this show not really saying much, I guess we should appreciate Dr. Fujita for the little she gives and simply her presence, right?

Maniac really doesn’t live up to its name at all. There is very little sense of mania and despite any and all hype surrounding this show, I wouldn’t say it necessarily lived up to it. For while, yes, I enjoyed Emma Stone immensely, Julia Garner as well, they are but half of this show and don’t compensate for the rest of it. For if it isn’t the doctors and the company they work for seeming a bit incompetent, it’s Owen’s lack of desire to be more than solemn most of the time. Add in he lacks any real growth over the series and it makes Annie a huge crutch this show uses to limp to its finish.

Though, to be fair, the driving force for criticism is that we see the doctors and Owen having potential. Despite not seeming like a “dark comedy” to me, it could be argued there could be something funny about Owen’s way of dealing with the world and the doctors bickering. Also, as much as Owen doesn’t make progress throughout the series, and can seem like dead weight, as a companion to Annie’s character through the different phases, Hill shows his value to the series. 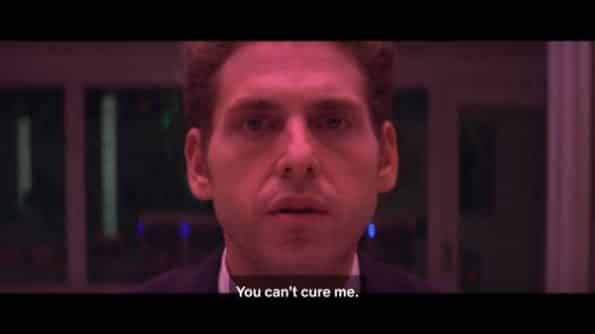 Owen: You can’t cure me.

Leading to why the mixed label. If you get through all the episodes, easily you will look at Stone and say she is one of the best things about the show. However, after the high comes down and you begin to process the program you’ll see that when it comes to certain elements you didn’t like, it wasn’t because they were outright bad but perhaps not your taste. Making it where Maniac perhaps only earns its name for being all over the place than being high energy, presenting a sense of danger, and excitement. For even if you just admit certain elements don’t meet your taste, it is hard to feel so strongly for one character, and their story, while the rest seem eclipsed when compared.

Has Another Season Been Confirmed?: This is a limited series with no second season planned.