It’s Ella’s birthday, and rather than it be a momentous occasion, she’s the type who takes stock of what she doesn’t have, and it brings down the vibe.

With Renee’s marriage officially over, she is focused on other things. She is looking towards Chris to give her some consistent penis, chatting with her co-worker Abby about being promoted to VP of Brand Strategy, and it makes Ella being a Debbie Downer annoying. For if it isn’t about getting old, it is about freezing eggs, and with Renee having no interest in kids or looking old, both topics aren’t for her, and she’d rather not.

While Whitney and Ola aren’t on the same page about kids or what to put on their registry, it seems when you get to the nitty-gritty, they understand and love each other. However, during Ella’s 32nd birthday party, Chris shows up, as Renee’s date, and that is mortifying. Especially as Ola makes it clear he is Whitney’s fiancée and sings, because it is a karaoke party, Andre 3000’s song “Prototype.” Leaving Whitney feeling the need to firmly establish her loyalty after asking Chris to keep his mouth shut.

Despite what you may think, Matthew is down with going to HR and disclosing his and Sondi’s relationship. However, Sondi believes it will lead to people thinking she is sleeping with Matthew for a leg up (no pun intended) and doesn’t like the idea. Mind you, she is a Fulbright Scholar[1], which is a real and very prestigious thing, but she feels everything will boil down to her relationship. So she isn’t ready to make the same sacrifice Matthew is just yet.

Speaking of sacrifices, we’ve been told that Anderson is referred to as Satan because he up and left Ella at the worst time of her life. She just got dropped by her publisher, was in a bit of a downward spiral, and only gave her a week’s notice he was going to South Africa. A work assignment that was originally just for the summer but then became a two-year absence.

This has yet to be forgiven, and Anderson popping up at Ella’s birthday while singing Alanis Morissette’s “You Outta Know” might be a bit on the nose but is very apt. Yet, because Ella is a grown woman, 32 years of age, she is allowed to, despite being rather drunk, go with Anderson, who takes her to a bar they used to frequent. There they talk, and while Ella is rightfully still in her feelings, it does seem she might be willing to begin the healing process with Anderson.

Feeling Bad For Ola, Yet Still Wanting Him and Whitney Together

We really hate when lead characters cheat, and yet we’re not supposed to hate them. Take note, we’ve never been cheated on but it seems like the type of action that can’t be excused and immediately calls into question the future of a relationship. So Whitney being this likable girl with this huge and abhorrent secret, and her and Ola generally being cute? It complicates things.

Now, take note, it seems there are some disagreements between the two that push the idea marriage will require a lot of communication. However, they’ve been together how long now? That, increasingly, seems rare and foreign.

Getting An Idea Of What Renee Does for A Living

So, while we may not know her specific job, we do know Renee works in ad sales and has aspirations to move up. We appreciate this information because Renee’s job felt like a mystery, and considering she was supporting herself and Jason? There was a serious question of not only what she did, but what job allows you to be as authentic as Renee without issue?

We got our answer.

Recognizing The Complications of Sondi’s Relationship

Is it weird to me Sondi is so ingrained in Matthew’s life that she is basically a step-mom to his child, yet they aren’t officially together? Absolutely. Yet, you get it. For him, disclosing the relationship is easy for he may gain a reputation, but you see Sondi, he’ll get praised for it. Sondi, on the other hand, not so much. Even with her accolades, her dating Matthew means age-old stereotypes and assumptions pushed upon her that she can refute, but if people have made up their minds, it’ll be hard to change them.

On top of that, she’ll gain a reputation too, but her’s won’t get her a head nod but looks of disgust or shame. Which leaves you wondering, how long will she wait before making things official, and how perfect does she think circumstances have to be?

How Black Media/Online Is Treated

Just getting press materials to know something is coming out, never mind getting screeners and trying to schedule interviews, is hard. It’s pretty much a job within itself and if you don’t have a team, the background, and really are ready and willing to do the grind, it is discouraging. However, as shown by what Ella went through, and as BlackTree TV has documented[2], and also I Am Eloho[3] , the struggle is real even when you have an established and legitimate platform.

Which is something that doesn’t really get talked about enough for while, yes, the basics of not having to worry about systematic violence is high up on the priority list, also up there is have opportunities. And while, yes, you could say Ella having to wait for an interview isn’t the worst thing, but considering they pushed her back nearly an hour and a half, and the publicist couldn’t even both to learn the company’s name or even pretend she knew it when talking to Ella? It really does reinforce what BlackTree TV presents in the linked YouTube video.

Getting Anderson’s Side Of The Story

It’s easy to damn a character’s ex when you don’t know their side of the story, and often in shows featuring women, the ex is trash, and that’s it. However, Anderson got to rebound a bit. With him presenting this major opportunity, noting Ella was in a place where she just couldn’t be happy for him, cut him off and put all the blame on their relationship’s demise on Anderson, you get it.

Now, this isn’t to say I don’t understand a week’s notice about being gone for the summer isn’t short. However, when is it a good time to tell someone who is feeling low you got one of the greatest opportunities in your life?

The Clapback Ella Had To Deal With

I think we all can get wrapped up in an image, and just because it doesn’t fit our viewpoint, we think it is only right to jump on it, criticize it, and believe people will agree with us. Such is the case when Ella thought she was going to come for Ilfenesh Hadera and what Ella thought was a stereotypical trope. However, Ilfenesh came ready and really pushed the idea that a lot of criticism is rooted in respectability politics and people becoming jaded. It’s easy to criticize films that look like The Big Freeze or Tyler Perry when you aren’t looking for alternative films or shows that represent the diversity you want.

Hell, the main reason we pay to watch films at Sundance, the Tribeca Film Festival, the Montclair Film Festival, and NewFest is that we get tired, jaded, and bored with a lot of what we watch throughout the year. However, either going or viewing what these festivals highlight hits that reset button and reminds us you have to sometimes, if not often, look for something new and different. You can’t just hope it’ll be presented to you on a silver platter.

Which for Ella, it seems she may need to do that and look beyond her bubble when it comes to how she feels about media she is tasked to watch and interview people for. 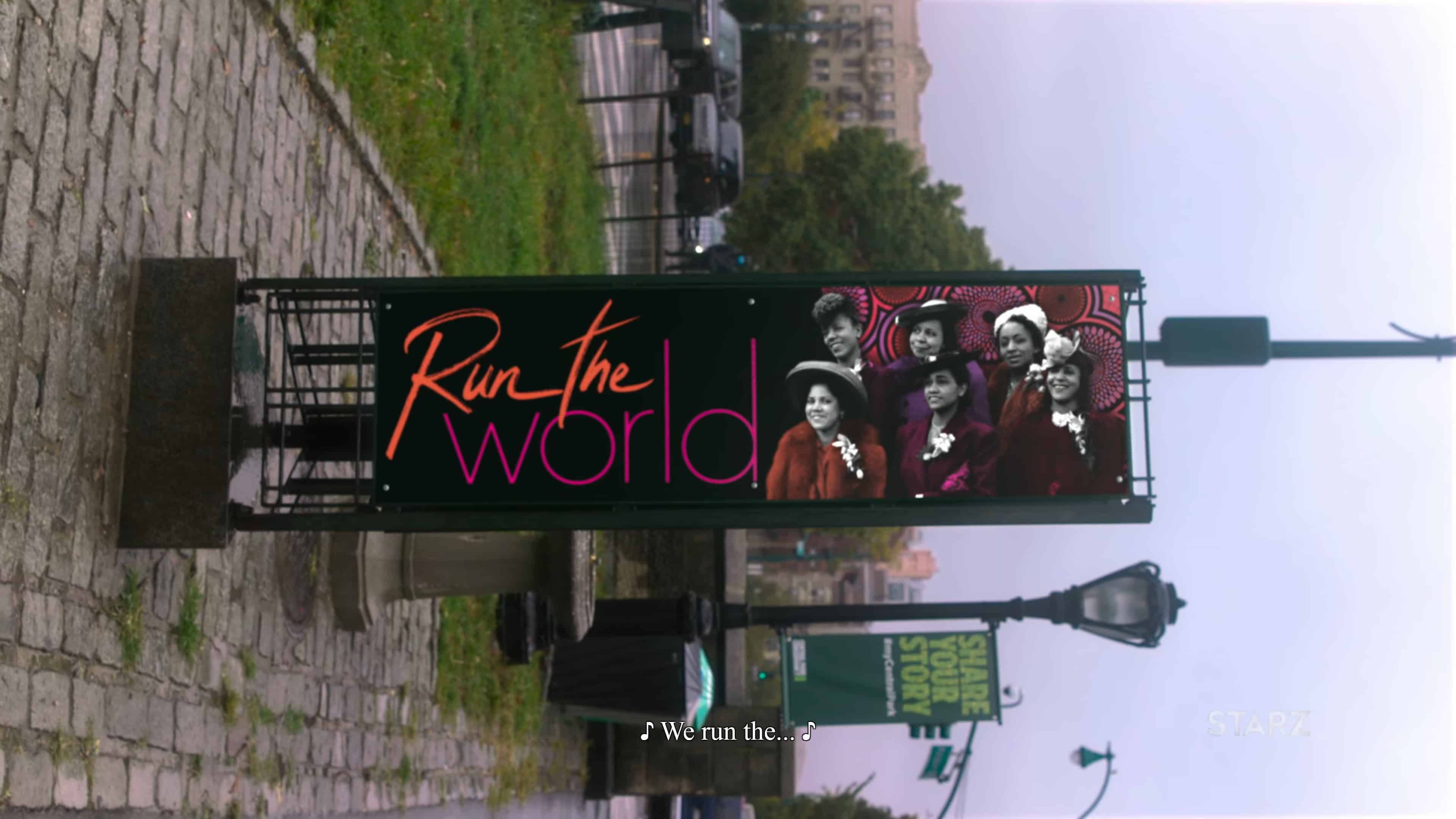 Run The World: Season 1/ Episode 3 – Recap/ Review (with Spoilers)
Trajectory: Climbing
At this point, I would say each character has their own voice, and the comparisons can not be put aside. Run The World has its own thing going, and while it isn't clear what the long-term goals might be, that lack of predictability is what makes it fun.
Highlights
Feeling Bad For Ola, Yet Still Wanting Him and Whitney Together
Getting An Idea Of What Renee Does for A Living
Recognizing The Complications of Sondi's Relationship
How Black Media/Online Is Treated
Getting Anderson's Side Of The Story
The Clapback Ella Had To Deal With
Low Points/ On The Fence
83
Subscribe to our mailing list