In many ways, Rise, seems like a gritty Glee

reboot but considering it is less camp and more serious, the comparison discredits all that Rise has the potential to offer.

In the town of Stanton, PA, after spending 17 years of his life as an educator focusing just on the coursework, not so much the students, Lou decides he wants to get involved with the school’s theater department. This becomes strangely possible as he bumps the current director, Tracey Wolfe and scraps her production of Grease

. Alongside that, he decides to rearrange the cast and take those who have played the lead in Ms. Wolfe’s past productions and knock them down in favor of Lilette, a girl from a working-class family, and Robbie, the school’s star football player whose mom is sickly and dad has long since moved on and gotten himself a new wife.

Naturally, as any musical released in the modern age, trials and tribulations litter throughout the cast. We have Lilette’s best friend Simon who is Catholic and coming to terms that he might be gay or bi. We have a trans kid named Michael, birth name Margaret, and alongside that, we have a homeless student named Maashous. Accompanying their issues is teen drinking, an underfunded theater program, while the football team gets a teacher’s salary for new turf, and a school that is underfunded to the point it seems some teachers are about to get fired.

Yet, despite many opposing Spring Awakening due to costs or its message, the kids seem adamant on getting it done, as are Mr. Lou and Ms. Wolfe. Even to the point of having an impromptu bonfire of school property to make their point known and Robbie threatening not to play football unless concessions are made. 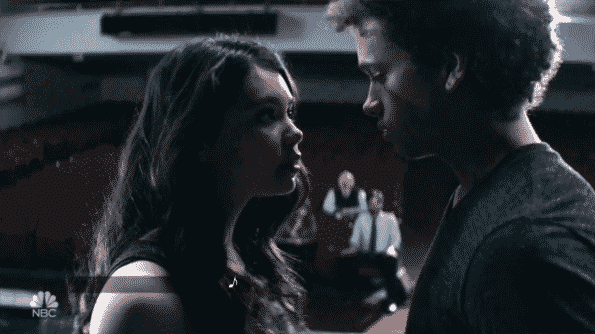 The football player having a crush on the girl who loves to sing and sees that as the ticket out of her increasingly stifling town. Sounds familiar? Well, arguably the chemistry here is a bit better than Finn and Rachel and without the love triangle element, the issue here is your usual teen jealousy. After all, Robbie is a popular jock, world at his feet, and Lilette is someone who has one foot already out of town and will have to make adjustments to her dreams for Robbie. But, as it is clear love is going to bloom for these two, you have to wonder what are they willing to compromise as issues arise. Especially as they become essential parts in each other’s life.

As noted, we have a kid who isn’t out yet, someone who is transitioning from female to male, and a child who is homeless and pretty much destitute. All of which come under the diversity/ inclusive movement Hollywood has going. Yet, they aren’t necessarily touted about as big deals, which is appreciated. Simon being very religious, but also wanting to explore his feelings, as shown by putting his hand on Jeremy’s knee, someone else in Spring Awakening, isn’t made into a thing. No one takes a look at it, Lilette doesn’t tease, and if you found yourself checking an e-mail or text, you could have missed it. 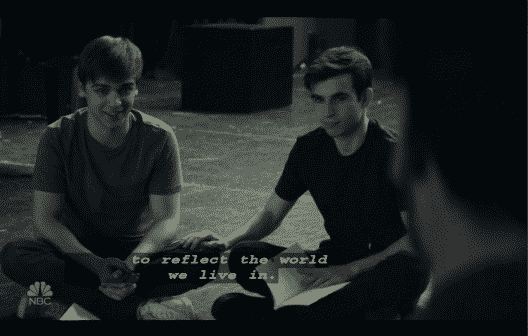 Then, in terms of Michael, outside of them being outed, I guess you could say, to Mr. Lou and him asking whether to call Michael by his birth or chosen name, that’s it. There isn’t this PC conversation about how brave and accepted she is. Michael is just allowed to live without some unnecessary pep talk.

And then there is Maashous. With him being homeless, the show begins to veer a little off the road a bit. Mostly in the form of Mr. Lou getting too involved and having Maashous live with him, seemingly without having much of a conversation with his wife, or his son that is expected to share his room. So while you have to appreciate a show which truly addresses poverty at that level, it pushes an issue that could bring this showdown. But more into that in the “On The Fence” section.

There Isn’t A Villain, Just Different Points of View And Insecurities

One of the things you have to appreciate about the show is there are no clear-cut villains. Anytime someone expresses animosity or anger, even if misdirected, is understandable. Coach Strickland not liking Lou taking Robbie’s focus from football makes sense since his job is on the line. Unlike Lou, an English teach doubling as a theater director, kids failing in his class, producing a terrible play, it won’t get him fired. However, Strickland is hired to pick up wins for that gives the school prestige. So him being ready to go to war makes sense. 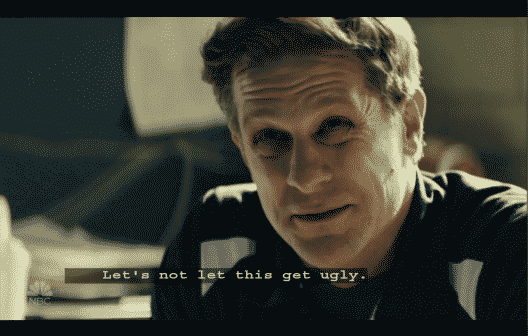 Heck, even when it comes to Principal Ward. You may want to dislike him for how he combats Mr. Lou, but then you are reminded what he is dealing with. If the town doesn’t have much in the way of money, that means he doesn’t have much of a budget. As pushed with him having to fire 4 teachers, not because they did something, but to make ends meet. On top of that, in terms of switching the musical, with seeing how Simon’s parents react, imagine how other parents will and them likely coming to him for answers.

Oh, and speaking of Simon’s parents, let’s be real, there aren’t that many shows which really don’t have people like them “evolve” over time. So while there is this vibe they will be homophobic, among other things, you know there will come a point they will reach a “Love is love” moment. Which isn’t terrible as much as it is sadly predictable. But, let’s not leave one important villain out: Mr. Lou. All things considered, he bumped Ms. Wolfe from her job and scrapped everything she did. From a different perspective, he is the villain of her story. Yet, like with everyone else who could be a villain, perspective is given to show there is more to the situation than it appears.

Reminding me of the issue of Lilette’s mother Vanessa having an affair with Gwen’s father, Coach Strickland. We don’t get to know either person as a parent that much, besides them doing the best with what they know. So while it is unfortunate they are having an affair, with us not knowing their history, it makes it hard to see one of the other as a bad guy. Even in terms of Gwen being upset at Lilette. Considering her mom is taking her dad away, and she is taking her usual starring role, you get why she is upset and she talks crap to Lilette. Does it make it right or excuse it? Not at all. However, you can understand, with her being a fictional character, why she does what she does.

It Seems Like A Good Advertisement To Watch Spring Awakening

Between Mr. Lou and the music, I must admit I’m tempted to see if Spring Awakening is playing locally and perhaps checking out a showing. Just because they sell you on the idea and it really makes you hope that, with this show being a musical, they may actually let you see scenes or even do a musical-musical episode where they perform the highlights of the show. One could wish, right?

You May Feel Coerced To Care About Mr. Lou A part of this show gives me The Quad vibes. What I mean by that is, despite the heart, soul, and interest really being the kids and what they are going through, there is the central character, Mr. Lou in this case, who gets more screen time than he needs to. And this isn’t to imply any criticism of Josh Radnor and his acting. More so the issue is how the writing of Mr. Lou makes him feel so coerced onto you. Especially as you get this generic savior vibe from him while you want to learn more about Lillette, Robbie, perhaps Gwen’s home life with her dad having an affair, or even how Maashous survives as homeless without parents. That is, alongside Simon dealing with his feelings while being religious.

Yet, instead, they have Mr. Lou who has three kids, of which one has a drinking habit, a wife who seemingly is trying to be understanding but is struggling, and two daughters who haven’t been developed yet. To say the least, Mr. Lou seems like the type you suffer through just because a scene with Robbie and Lillette is around the corner or we’ll get to see Simon and Jeremy hanging out. 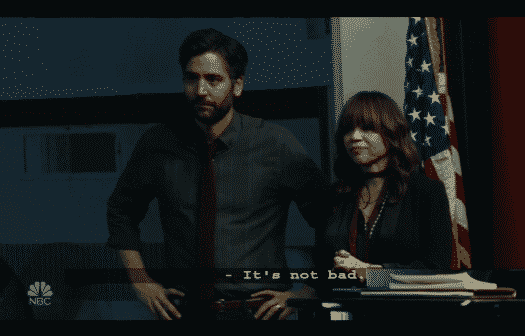 The only issue here will be how much is Mr. Lou pushed front and center. Outside of that, the way the rest of the adults are handled is perfect. We know enough about them to establish a story but they don’t overstay their welcome. It is clear they are supporting characters and not in active competition to be one of the leads. That is unlike Mr. Lou whose main issue is that he comes off as your generic savior we have seen ad nauseam. Who, at least in the pilot, isn’t given any interesting fault besides, after 17 years, now he wants to truly be involved in the students’ lives.

But, despite Mr. Lou being the pimple you just can’t pop, and the gritty Glee reboot vibe, there is definite value in Rise. To be honest, I can’t imagine this show past a 2nd or 3rd season, especially if the 2nd season expands to your usual 20+ episode order but, like the comparable Glee, it starts off promising. Now the question is whether it can keep it up.