Dog behaviorist, Cesar Millan, briefly recaps how and why he came to the United States as well as the importance of his 20+ year friendship with Jada Pinkett-Smith.

It All Started With A Smack & Lassie: Cesar

What makes a 13-year-old boy decide he is going to become a dog trainer? Well, not just a love for Lassie and Rin Tin Tin, but also you telling your mom you want to be a drug dealer at 10. Something which leads you to being smacked the hell out of and being asked if you want to kill her. But, there are some keywords here – dog trainer vs. vet.

Now, why a dog trainer instead of a vet? Oh, that’s simple: money. Cesar grew up poor in an area where a ten-year-old would more likely idolize a drug dealer and Mexico, when he was growing up, didn’t have programs Americans often take advantage of. Social mobility wasn’t much of a possibility.

What has to be noted here is that, when it comes to the Smith family, their platform has always made it where you got different voices, identities, and a sense of diversity through them just working. Especially working as actors or as media personalities, like with this show. For notice how Jada doesn’t jump in much and add her two cents. What she gives Cesar, who I didn’t know about till this episode, is a space to speak his truth. To add his voice to the movement, using Jada’s platform, and thus being a means of her showing her support.

Before one Christmas, when Cesar was 21, he made the journey to the United States and he doesn’t make it sound easy. It took about two days to get to the border and from there comes the next issue. Not just crossing but scammers and others ready to take advantage of you. After all, some don’t know English, as Cesar didn’t, some want to sell you into the human trafficking market, others to harvest your organs, and likely worse. Yet, intuition and faith guided Cesar to this skinny pot smoker. Someone who, in Mexico, raises major red flags but he did well by Caesar. He was paid and got Cesar into the US and even a cab ride into San Diego.

Leading to some gaps in information. Such as, where did Cesar live when cleaning Kennels? Also, how did he convince a bunch of people in Inglewood to walk their dogs? Granted, he said he’d do it for free but still. Also, there isn’t much in the way of conversation on how he developed his training methods so how did that come about? Jada: Cesar, you’re like the epitome of the American dream to me.

One of the slightly weird things about the way this episode is handled is that it feels like we skip key points of Cesar’s journey or it is disorganized. For one, when did he meet Jada since I can’t really imagine Black people in Inglewood handing their dogs over to a man speaking broken English. On top of that, how did he learn his methods of dog training? Was that back in Mexico with the dogs which were around or did he practice on their dogs? Never mind how did he find a place to live and the question I’m sure a lot of people wonder, how did he survive until he got big?

While there are books like In The Country We Love, which show how finding your community helps immensely, he was 21 at the time. He got dropped off by a taxi cab with no money to his name and just called Kennels for a cleaning job. There comes a point where it feels like he is advertising a book that doesn’t get named and we are given but a taste of his story so that we pay for the full-length tale.

The Highs and Lows of Cesar Millan: Cesar, Jada

What is the sort of sensationalized bit of the episode, why this man thought of suicide, isn’t dove into that heavily. It is noted failure was the reason and that Jada was his anchor. Someone who went from a customer’s girlfriend to one of his best friends. What is also mentioned is him apparently being divorced because he and his ex-wife were incompatible, alongside her not liking animals.

Now, as for how he met this woman and the tale of their relationship, either it was cut or just not spoken about in detail – who knows? All that is clear is they aren’t together anymore but have children. Also, that failure, him being divorced, was a factor in him contemplating suicide. Which, if it wasn’t for Jada, who invested in him learning English and being there when he needed her, he may not be alive or at least in the position he is in. 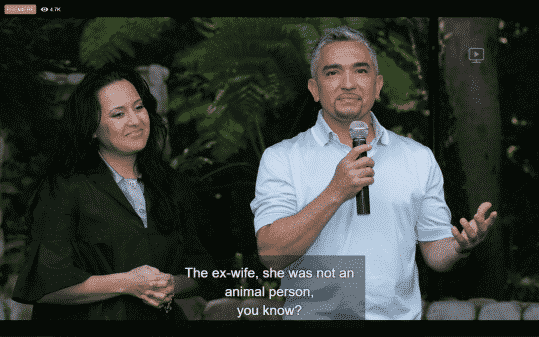 Cesar: The ex-wife, she was not an animal person, you know?

Recognizing maybe I don’t have the best attention span, I rewatched this and am so confused about Cesar’s story. I get he is a Mexican immigrant who came over without proper documentation sometime around 1991, at the age of 21. It is also understood Jada met him around the time she was 19. What I don’t fully get though is life from 1991 to 2018.

Here is where I get lost: He goes from dog walker and cleaning Kennels to seemingly, in 6 years, owning his own dog school, being featured in the LA Times, and then producers meeting with him to have his own show. So, at that point, it is 1997. What happened over the next 20 years? Doing a quick Google search shows he met his first wife in 1994 – how did they meet and what happened? What are the details of their divorce?

That is where I kind of got lost because, on one hand, you get this conversation is about Jada’s connection to Cesar yet it seems also geared to be about his life outside of her. Yet there isn’t a coherent balance between the two. You get the gist and become intrigued enough, as I did, to go to Google to connect the dots but it’s only because his story seemed off in ways it feels like it shouldn’t be.