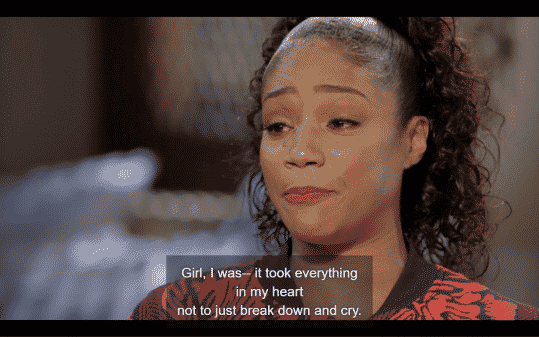 Tiffany Haddish: Girl, I was — it took everything in my heart not to just break down and cry.

Tiffany Haddish comes to sit at the red table and after reintroducing herself, she drops a few new tidbits about herself.

As has been long established, and can be read about further in Tiffany’s book

, her upbringing was hard. While things were good for a while in South Central LA with her mom, two brothers, and two sisters, then her mom got into an accident. The kind which made it where she had to learn to walk again, talk again, and even had some memory loss. That combination made her a very mean person and being that Tiffany couldn’t take care of her mom and four kids, at 13 she went into foster care. Something which sucked for her since, not only was she separated from her siblings, but she didn’t get placement. Instead, similar to what we saw Simone go through on Star, she got placed into what essentially was a juvenile detention center.

And things didn’t really get better for a long time. With Tiffany hearing her whole life that she was stupid, in an ebonics way but not knowing the translation, she never tried in school. In fact, until a drama teacher helped her out in 10th grade, she was only good with words used fairly often and up to four letters. Which may make you wonder how she got a diploma? Well, like Jada, plagiarizing and cheating.

One of the reasons Tiffany’s story and personality are so important, as Jada said, is because we don’t see and hear people like her that often. Take Jada for example. We know she came from the hood of Baltimore and was a little tomboy roughneck but she isn’t like that now. She is poised and while she could probably switch up on you, she isn’t going to do that in public. Tiffany, on the other hand, she is an around the way girl all day every day on camera and apparently off.

Similar to Taraji P. Henson, she presents a realness that isn’t about respectability politics or being seen as proper by people outside her culture and race. She brings her dignity and her person to every situation without shame and that’s empowering. For as much as it is nice to see the Jada Pinkett-Smith types and Viola Davis who came from rough backgrounds but now are statuesque and can come off proper, it does create a bit of alienation or othering too.

Just in the sense that, there is the idea that you have to code switch and be uncomfortable for the sake of other people’s comfort to make it. Tiffany Haddish gives the finger to that and laughs to the bank.

But getting to the laughter is the difficult part. For being bullied and bouncing around to different homes may have given her a routine and helped in her present, but it was challenging in her past. I mean, can you imagine how you would handle all Tiffany went through? Hence why she shouts out individuals like Kevin Hart, her social worker, Richard Pryor and the guy who voiced Roger Rabbit. Their investment in her changed everything and made it where she found a way to turn her pain into comedy and something lucrative.

From Here – On: Jada, Tiffany, Adrienne

At present time, Tiffany doesn’t really have time to date but when Drake talked about having dinner she made an opening. One which he failed to fill but it is whatever at this point. He won’t end up in her penis book. But, as for the question everyone is talking about, Girls Trip 2? Well, it seems money is the issue there. There are four women, Tiffany is now in high demand, Regina Hall’s quote is going up and Queen Latifah and Jada may not be all over but they still present a demand. Especially when a film makes over $100 million. So, that’s in limbo.