As EJ and Cookie Johnson sit at the red table, the message is essentially that you’ll prepare your child for the world no matter what you do. Better to in love than oppression. 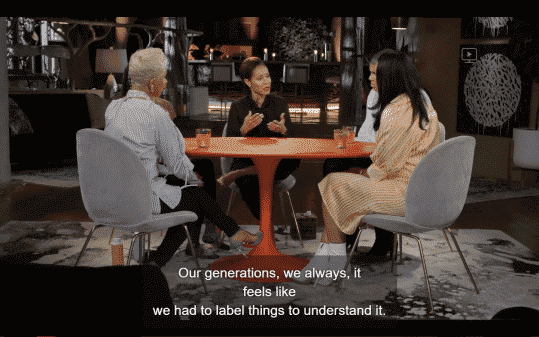 Jada: Our generations, we always, it feels like we had to label things to understand it.

Gender fluidity, dispelling of what is masculine and feminine, while understandable it is also something hard to quickly adapt to. For, whether you are Jada and Cookie’s age or Adrienne, you’re used to labels. Knowing someone considers themselves gay, androgynous, metrosexual, etc, it helped you understand them. It gave you some sort of blueprint. However, with people just wanting to be identified by name and not associated with labels, it complicates things.

Now you are in this awkward space of trying to figure out what pronoun to use, maybe even figure if they are part of your community or simply embracing their feminine energy. Something that can even be a challenge if you’re open minded because, there is a world of difference between a friend, acquaintance, or a strange being authentic and something which can only be described by their name and it being your own child.

Not to imply it is easy for the child either. While the world is beginning to adapt, EJ notes that even they sometimes have trouble deciding which bathroom they want to go into. That, facing the world in what feels good for you and your body takes time and as much as you are loved, there comes reality checks. The kind which can knock you right on your ass. Waking you up from what may seem like a bubble where things are better than they truly are. While Willow doesn’t speak on her dating life, she does co-sign a lot of what EJ divulges when it comes to the layers involved with not just dating them, but the road to being official. For, with EJ, there is the question of who are you trying to date? Are you dating EJ, the child of Magic Johnson? Is the fame and sense of luxury and celebrity what you are dating? Or is it simply EJ? What are you there for?

But there is also that other layer, one which Willow calls “The sacred space” which may not just be home but wherever her parents are. Because, as privileged as one may consider EJ or Willow, you have to recognize their parents were under no obligation to welcome them with opening arms. To accept them and enable them to find themselves in a safe environment. One which, per EJ, kept it real with him that the outside world may not be as friendly, but inside their home, gave them the space to explore.

And because of that, to Jada’s surprise a bit, even with these kids being so completely themselves, they honor their parents’ opinion and the space provided. Making it where, for CJ, they have felt they have yet to find someone worthy of coming into that space. As for Willow? Well, again, as much as she may give her opinion and talk about things which happened in the past, her present isn’t something she really actively shares much. Jada: And I was an art school kid that was considered a weirdo

Jada makes it a point to put out there, it wasn’t her rearing which led to Willow and Jaden becoming who they were. In fact, being that she was from a rough part of Baltimore, when it came to raising Jaden, she was raising something a bit foreign. Thus pushing the idea, while maybe not as fearful as Will was, being that Jada didn’t have a blueprint or label to give Jaden, she experienced the same feelings of fear. Something she learned to, within reason, abate a bit but it still is kind of there.

For, as she and Cookie share, the Willow and EJs of the world didn’t exist, in the mainstream, as they do now. And while, yeah, Adrienne allowed Jada to color her hair and be artsy before it was cool, that’s nothing now. But, the thing to take away from all this is how, as Cookie points out, your kids are going to do what they want to do. So either you can stand beside them, support them, and ready them for a world which may not love and accept them as you do, or push them away, deny them a safe space, and in the process of trying to dim their light, suffocate them. Either to the point of abandoning you or possibly worse.

What is normal for you, in your natural state, do that.